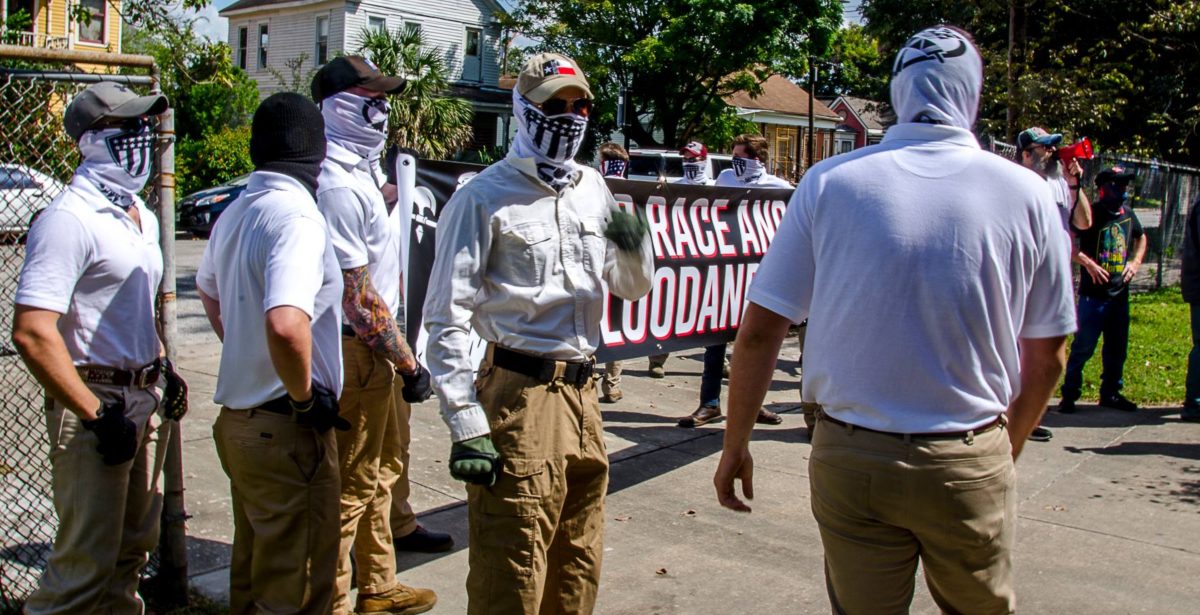 It is Time To Get Serious About Security At Events

Along with many people that surely read this website, I watched the recent documentary on Atomwaffen Divison several days ago. The documentary didn’t tell us anything we didn’t already know, other than the cadre of the group, some of which had already been outed by antifascists, liked to hang out in Houston, Texas at black metal shows.

However the push by the group to leave behind ‘activism’ and public rallies and instead focus on soft targets also lines up strongly with the actions of groups like Identity Evropa, Rise Above Movement, the Proud Boys, and Patriot Front.

In the lead up to Unite the Right, Identity Evropa walked into Leftist professors classrooms in Southern California for the purpose of “monitoring them.” Also across the campus and others near by, saw IE flyers, posters, meet-ups and banner drops. Soon after, a Leftist bookstore was the victim of broken windows and an attempted arson attack. Other Identity Evropa chapters disrupted workshops on racism in Florida, while again in Southern California, members of Rise Above Movement with the help of media outlet, The Red Elephants, disrupted various teach-in events about white supremacy and racism.

Event security should always be a high priority
Know your local fash, train in self defense, organize security, and have a plan for how to deal with different threats to your organizing https://t.co/N5SC7FhpdR

Members of the Proud Boys have routinely protested outside of and harassed protests and left-wing events, protesting outside of a coffee house in East Oakland that refused to sell coffee to the police, for instance. In the Pacific Northwest, members of the Proud Boys have even gone so far as too as to counter vigils being organized by the family of a man killed by the local police and protest Planned Parenthood Clinics, while in Florida, they have been used by the GOP in the fight against protests calling for a recount in the recent election.

Patriot Front has been another group with a huge drive to target the anarchist movement. In September of 2017 they attempted to storm the Houston anarchist bookfair, they protested outside of Monkeywrench books in Austin, they attempted to attack an Occupy ICE encampment in Austin, people are pretty sure PF was behind window breaking at Monkeywrench on the anniversary of Kristallnacht, and most recently, Patriot Front attempted to attack the Boston anarchist bookfair before being quickly ejected. The point is, these groups are continuing to go after what they have referred to as “soft targets,” and more and more, have been signally anarchist events out specifically for attack. There is no reason to assume that this trend will end anytime soon. We must prepare to defend ourselves as public events or prepare to bury our friends.

A Few Things to Remember

Leaked Patriot Front organizing manuals and talk on discussion forums shows a strategy based around targeting areas for flyering, banner drops, stickering, and other forms of activism outside of and away from where participants actually live. If a group is targeting a place, they probably don’t live there and are just passing through. They also assume that if they are caught, the blow back will be less harsh then if they were caught in their hometown.

This seems to be a general strategy used by groups such as Patriot Front and Identity Evropa, where people existing in one area will often get together to go hike on the weekend and on their way out on the freeway, stop off in a small suburban town to put up a few stickers and posters. This activity is designed to make the group appear large and spread out over a vast area, when in reality, it is the same small cadres putting up the materials.

Fascist and Alt-Right groups are also getting smarter; they are taking photos which make it harder to tell where a sticker or posters are located, and often will release photos of their ‘activism’ on social media long after such materials have already gone up and most likely have been destroyed by the public.

It’s possible this same logic will be used in event attacks and disruptions: the disruptions will be made up of people from outside of the town and often will hook up from friends that are rolling through for the weekend. Much of this coordination takes place on Discord and other platforms.

Some Ideas for Security

SQUAD: Most anarchist events I go to now have a security squad in place largely monitoring the door. This apparatus needs to expand. While a strong team needs to be stationed at the door at all times, there also needs to be people on the outskirts of the area of the outside event also watching. In short, if a group of 5 dudes wearing skull masks are able to get up to the front door and walk inside, such as they did in Boston, this is a problem. While Boston did well driving them back, if these people would have been armed, it would have been a whole different story. We have to think about having not only a strong security squad in place at entrances, but also teams outside of the event, looking for any possible disruption, and ready to communicate with the larger group at a moments notice.

BACK-UP SQUADS: In the case that Alt-Right trolls get inside a building or say, one just starts livestreaming during an event, there need to be people in the audience that are ready to stand up and help show these people the door. These people also need to be able to communicate to the rest of the crowd and call on the wider community to help push these people out, open doors, take away their cameras, etc.

A WELL EDUCATED MOVEMENT: At each and every anarchist event we need to have information in the form of flyers and workshops on the local Alt-Right and far-Right organizers, their faces, and other thing we know about them. Get into the hands of the community. We also need to spread information about what these people wear (Proud Boys wear black and gold polos, this is the Identity Evropa logo, etc) and why.

As already stated, each and every anarchist and antifascist event should have a security plan. We cannot wait around for Atomwaffen to throw a bomb into the local infoshop, or the let 15 members of Patiort Front run up on a crowd that includes babies in strollers, elders, and random members of the public.

We should also keep in mind, that many of these groups are giving up public outreach and activism, and instead want to try to simply hit back against their enemies if it ‘hurts the optics.”

As expected the most dedicated PB members are holding strong in support of the group. Russell Schultz claims that if people are going to call them an extremist group they plan on “giving them a reason to call us an extremist group”. pic.twitter.com/k6PCcDeikj

Lastly, we need to defend ourselves, and our spaces. Laughing these people out of the room isn’t enough, we need to protect ourselves at all costs and show that we are not weak, soft targets.

As groups like the Proud Boys in the Pacific Northwest are now saying that they are only going to increase their presence at Left events, the need to beef up security, educating the public, and above all, defend ourselves!