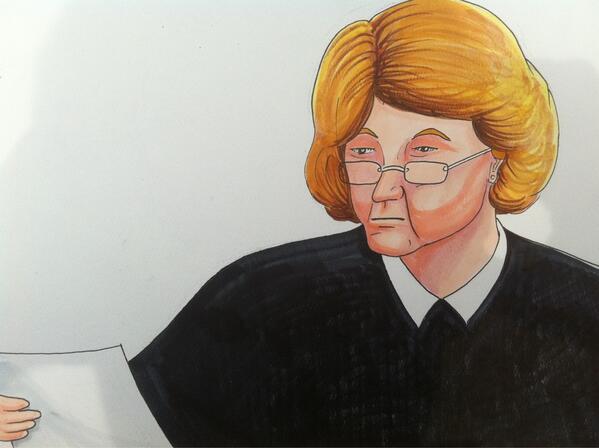 It Was Manning Judge Who Ordered Extreme Press Security

Huffington Post reporter Matt Sledge read my Boing Boing post earlier today about reports from the Bradley Manning trial of dramatically-increased security measures for press. Those measures including armed military police standing behind journalists at their laptops, snooping on their screens.

He reports that the new, oppressive security measures were ordered directly by the judge because reporters were violating court rules (which no one can find a copy of), and carrying “prohibited electronics.” For this, the government needs armed military police standing right behind reporters as they type, in the media room.

I’ve covered civil and criminal cases in federal and state courts (including a terrorism trial), and the Manning court martial for eight months, and I haven’t run into an atmosphere quite as tense as today.Here’s the latest: the Military District of Washington told me in a statement that the new security measures are coming straight from the judge, and in response to “repeat violations of the rules of the court both in the courtroom and the media operations center.” No elaboration on what those were.

A snip from Matt’s HuffPo item:

Col. Denise Lind, the judge overseeing the case, ordered the increased security measures “because of the repeat violations of the rules of the court both in the courtroom and the media operations center with regard to broadcasting and electronics,” the Military District of Washington said in a emailed, unsigned statement. “The Military Police are to screen personnel to ensure no one is bringing prohibited electronics into the building and to ensure compliance with the rules of the court.”

I presume Col. Lind is referring in part to the leaked audio of Bradley Manning’s statement before the court, which Freedom of the Press Foundation received from an anonymous source and published online.

Armed military police peering over journalists’ shoulders, no Internet access in the remote media room, Army staff frisking everyone for phones — those weren’t the only obstacles for reporters covering the trial today. The military also refused to publish key documents the government used to build its closing argument.

Below are tweets from reporters about the abusive treatment by the military.