By Jim Naureckas, Fairness and Accuracy in Reporting.
June 12, 2020
| Educate!
It Won’t Be Protests That Bring On The Next Big Wave Of COVID192020-06-122020-06-12https://popularresistance-uploads.s3.amazonaws.com/uploads/2017/12/popres-shorter.pngPopularResistance.Orghttps://popularresistance-uploads.s3.amazonaws.com/uploads/2020/06/black-lives-matter-masks.jpg200px200px 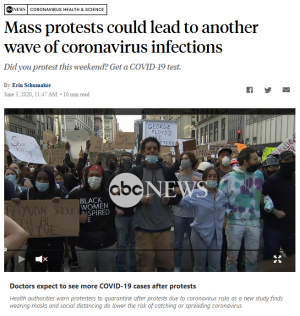 As an example of “how this might play out,” ABC (6/3/20) compared the protests to a military parade in Philadelphia during the 1918 flu pandemic: “Within a day, every hospital bed in the city was filled and within six weeks more than 12,000 Philadelphians were dead.”

As people across the nation and the world came out to protest the police murders of George Floyd and Breonna Taylor, corporate media carried a warning: Demonstrations against police violence risk creating a major upsurge in the spread of the coronavirus.

As thousands of demonstrators continue to protest the killing of George Floyd, health experts are worried that a second wave of Covid-19 infections could be sparked by the mass gatherings.

An opinion piece in USA Today (6/8/20) warned, “George Floyd Protests Create Risk of Deadly Coronavirus Resurgence.” “The absence of social distancing during the George Floyd protests could lead to a significant increase in cases in Minneapolis and across the country,” the subhead added.

With large groups of people out in hoards close together during the protests, Minnesota Governor [Tim] Walz said he expects a sharp increase in cases of Covid-19 in his state.

“I am deeply concerned about a super-spreader type of incident,” Walz said. “We’re going to see a spike in Covid-19. It’s inevitable.”

Top officials on President Donald Trump’s coronavirus task force told governors on Monday they were worried about a spike in infections due to the mass protests against racial injustice taking place across the country. 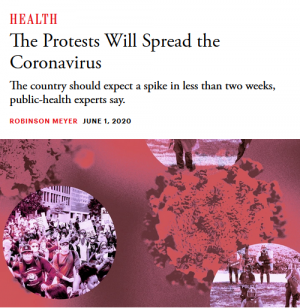 “I don’t think there’s a question of whether there will be spikes in cases in 10 to 14 days,” the Atlantic (6/1/20) quoted a researcher nine days ago.

The Atlantic was particularly urgent in its warnings. “The wave of mass protests across the United States will almost certainly set off new chains of infection for the novel coronavirus, experts say,” Robinson Meyer (6/1/20) wrote. Conor Friedersdorf (6/4/20) told readers that “the risks involved…include at least some chance of death and disease on a terrifying scale.” Alexis C. Madrigal and (again) Robinson Meyer (6/7/20) stated bluntly:

If the country doesn’t see a substantial increase in new Covid-19 cases after this week, it should prompt a rethinking of what epidemiologists believe about how the virus spreads.

But is it? If protests against police killings don’t produce a “second wave” of coronavirus infections, do we really need to rethink everything epidemiologists have told us about how Covid-19 spreads?

In fact, if we’ve been listening to what epidemiologists have told us about the coronavirus, there are reasons to believe that the protests will not have a major impact on the pandemic’s trajectory. 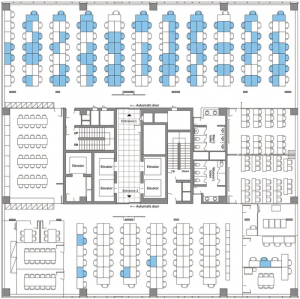 The coronavirus can spread quickly through an enclosed workspace, as illustrated by this map of a South Korean call center, where 44% of workers on one floor were infected; their workstations are marked in blue (Business Insider, 4/28/20).

Most obviously, protests overwhelmingly take place outdoors, and coronavirus transmission occurs overwhelmingly in enclosed spaces. As immunologist Erin Bromage (5/6/20) notes, “Of the countries performing contact tracing properly, only a single outbreak has been reported from an outdoor environment (less than 0.3% of traced infections).” One study estimated that outdoor transmission is 19 times less likely than indoor transmission (MedRXiv, 4/16/20).

Does this mean that no one will catch the coronavirus at BLM protests? To the contrary, we can be statistically certain that some infections will occur. But it does emphasize how dangerous outdoor activities have to be before they can have a significant impact on the course of the pandemic. This is part of why it’s hard to see the impact on new case rates of the anti-lockdown protests that started in mid-April, even though, from news reports, it appears people who demonstrated in favor of lifting coronavirus restrictions were far less likely to wear face masks while doing so.

Another important aspect of protests, whether against police violence or quarantines, is that even when they are huge, they involve a relatively small percentage of the population. If, as seems likely, hundreds of thousands of people across the US came out to express outrage against police killings, that’s still less than a percentage point of the US population.

Protests also tend to take place over a limited time frame. For an activity to have a sustained impact on the course of the outbreak, it needs to be a continuing change in behavior that increases the odds of transmission. In the context of a pathogen that is already widespread in the population, a one-time event can cause a temporary spike—but not a “second wave.”

So far, there’s no sign of any spike related to the BLM protests. In Minnesota, where protests started on May 26, or 15 days ago, average new cases have declined from 704 to 431 per day since then (as of June 9). New York State was averaging 1,468 new cases a day when the protests started on May 28; now it’s averaging 930. These numbers are not so much a defiance of epidemiological observations as they are confirmation.

None of this is to say that activists should not take the coronavirus into account when planning demonstrations; it remains a deadly disease for those who catch it while protesting, even if they are unlikely to shift the course of the national epidemic. Masking is highly encouraged, as is maintaining social distancing to the extent possible. Marches are safer than stationary rallies; clapping is safer than chanting. 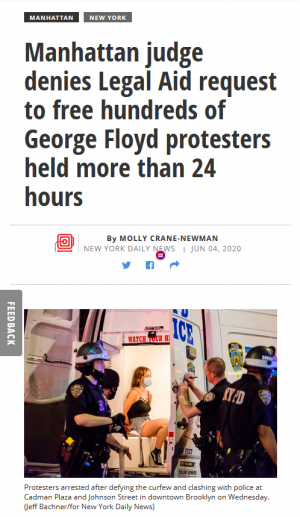 “The overwhelming number of people held illegally are those accused of charges that should have resulted in their automatic release,” said the Legal Aid Society (Daily News, 6/4/20).

Police can play a great role in making protests safer, though of course if public safety were their paramount concern, these protests would not be happening. Anti-protest tactics like tear gas and “kettling,” reprehensible at the best of times, should certainly be abandoned in the face of a public health emergency. Holding arrested protesters in crowded cells certainly puts them at high risk for spreading the coronavirus; New York State Judge James Burke’s suspension of the rule that arrestees have to be brought before a judge or released within 24 hours, “because we are in a crisis caused by the Covid-19 coronavirus pandemic” (1010 WINS, 6/4/20), was a shocking prioritization of bureaucracy over human life.

But those warning that protests against police lawlessness could create a “second wave” of Covid-19—as though we were through with the first wave—are barking up the wrong tree. Of much greater concern than the protests—an outdoor activity with a limited time frame involving perhaps hundreds of thousands of people—is the reopening of the economy, which envisions tens of millions of people returning to mostly indoor workplaces for eight hours a day, five days a week, for the foreseeable future.