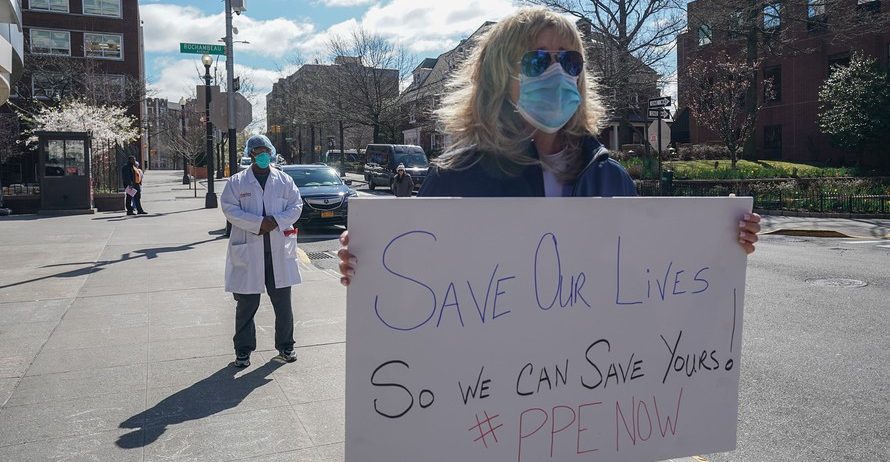 It’s Bigger Than Scrubs – My Termination From United Hospital ER

St. Paul, MN – During the course of my May 8, 2020, shift, I was brought into two meetings with managers of United Hospital’s Emergency Room and two representatives from its Human Relations department. By the end of the second meeting, I was informed that I was terminated from employment for the following reason, as stated by United Hospital:

“Cliff’s conduct on April 24, 2020 violated the Hospital policies and expectations, including the Respectful Workplace policy and the Code of Conduct. Cliff’s conduct on May 8, 2020 violated Hospital policy and expectations regarding uniforms and hospital scrubs, as well as his duty to follow the directions of his leader. Each incident constitutes an independent ground warranting termination of employment. As such, Cliff’s employment is being terminated effective immediately”.

Moving beyond the talking points of Allina Health, let me provide some context. For months, working conditions, patient safety, public health, and the rights of union members have been degraded and placed at risk by Allina hospital administration’s policies, behavior, and egregious lack of preparation for a global pandemic. This is not a matter of opinion or perspective but documented fact, evidenced by hundreds of OSHA complaints, failing infection protocols, communications of frontline healthcare workers, and hospital administration’s ongoing acts of intimidation, harassment, and threats to our professional standing.

Hospital administrators placed profits and executive compensation over protection of employees, year after year. The resulting failure and disorganization have pushed workplace safety, nursing practice, public health, and our rights as workers to a breaking point.

Frontline workers in disparate industries, workplaces, and healthcare settings are not tolerating these developments, and United Hospital is no exception. On a national scale, we rank and file workers are beginning to stand up for ourselves and reject the catastrophic role of management and the executive class. As we reject the decisions and power of our superiors in this life-and-death scenario, we are being harassed and punished to remind us both who is in command and what actions they are willing to take to subject us to that command, no matter how costly or dangerous to us or to the public.

I reported workplace safety concerns to United Hospital because I believed the hospital was violating the law and our union contract. I reported my concerns on behalf of myself, my family, my coworkers, and the community. When I was harassed and retaliated against for reporting these concerns, I was fired. Workers throughout the hospital are experiencing the same type of daily managerial harassment, threats, and abuse that I did. It’s a paradigm that sets power against morality and the fundamental rights of frontline workers and the public we serve.

I am a union steward. This means that I am a frontline RN with the additional role of defending our union contract and the principles and practices it articulates. I do not get paid for being a steward, yet it’s a role that I have played in three unions and two industries in my lifetime. Among my responsibilities as a steward is looking out for the health care safety of my coworkers and patients. For the last two months, I have carried out that role by advocating for protective measures designed for the safety of both patients and public. I have called attention to specific and general policies and practices that risk the lives of many. I have sent ongoing communications and concerns to management. I have filed complaints with OSHA, which is currently in the process of an investigation of United Hospital. I have reached out to United’s Emergency Room (ER) Manager and Director as well as the hospital’s Chief Nursing Officer (CNO), President Sarah Criger, and Allina CEO Penny Wheeler to reporting unsafe work and nursing practice, and a state of ongoing intimidation of staff. I’ve been met with silence, misdirection, or outright hostility.

The more forceful my advocacy for patient and workplace safety, the more aggressive hospital management has become with me. They have called me unannounced at my home and lied about the potential for disciplinary action against me. They have shadowed me and my coworkers as we perform patient care in working conditions that are nothing short of life-threatening. They have confronted me on the ER floor and told me that I could not “conduct union activity” when I am speaking with my coworkers about union rights. They have persecuted me for basic infection prevention measures and punished me with discipline for pointing out ongoing workplace harassment conducted by hospital management. They have made credible threats to my career, which is what my family relies on for basic income and for access to the medical care that we need. On Friday, May 8, 2020, they made good on those threats and fired me from my position at United Hospital ER.

Allina has issued a response to my firing that accurately states, “Allina’s employees are the foundation of our organization. Without them we would not be able to serve the health care needs of our communities.” But it purposely misrepresents my termination by writing that I was, “…violating(ing) hospital policies designed to protect our patients and staff.” Nothing could be further from the truth at this late stage of a global crisis exacerbated by corporate disorganization and mismanagement. This level of arrogance and casual disregard for the experience of frontline workers and the public we serve is something I have never experienced in over 35 years in the US workforce. Allina is not taking all available actions to protect frontline workers, patients, and the community.

For these and additional reasons, I have continued to organize with frontline workers in United Hospital and the greater public. I am being represented by my personal attorney, Amanda Cefalu, and the Minnesota Nurses Association. I have filed grievances about my treatment with Allina Health and will be filing additional charges of Unfair Labor Practices for myself and my coworkers. I was notified and have made administrators at United Hospital aware that my case has been referred to the discrimination unit of the Minnesota Department of Labor and Industry.

As I have suggested, this is bigger than scrubs.

I would like to close by restating unequivocally my loyalty to my coworkers, to the people we serve, and to the working class people that are the fundamental force of all humanity. Our task, contrary to the corporate coercion so desperate to keep us in a state of subjugation, is to organize, envision, and struggle, and to craft our own power during this moment of global crisis. If we do it correctly, we have the potential to build healthcare that is powered by people and that opens more doors and potential than this statement has time to address. This goal will inform our actions and intentions from this point on.