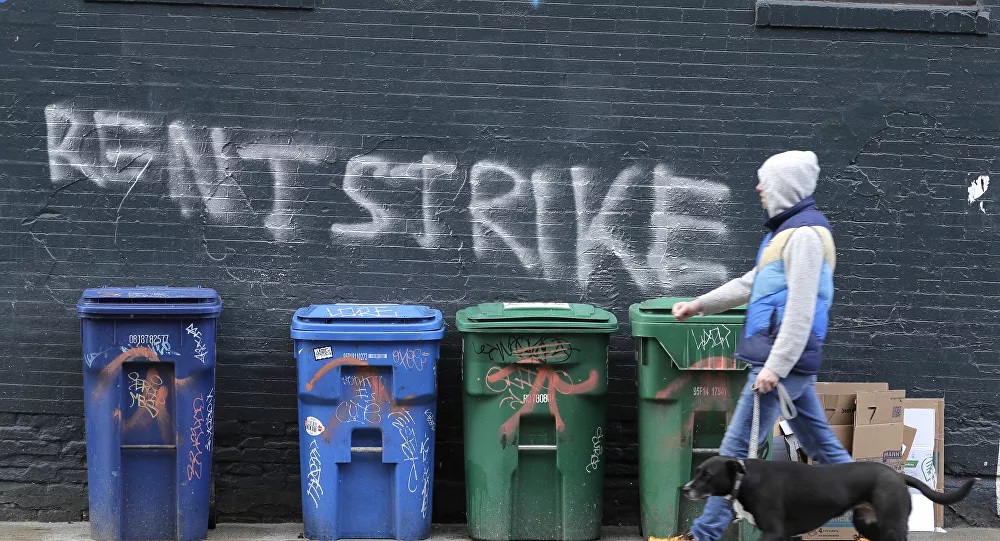 On Tuesday, popular pressure won out over threats by the US Supreme Court and the Biden administration re-imposed a moratorium on evictions for another 60 days, protecting many Americans behind on rent from losing their homes until October 3. However, the Court is sure to act quickly against this defiance.

With a new wave of COVID-19 cases rapidly increasing in the US, this victory, while for the moment averting disaster for millions of poor Americans, is ephemeral at best. If we are to truly protect Americans from a tsunami of evictions caused by pandemic-related lockdowns, US President Joe Biden must also cancel the rents.

The White House initially waffled on the issue of extending the moratorium, having been told by Associate Supreme Court Justice Brett Kavanaugh in a late June ruling that he would oppose any further extension of the ban if done by the US Centers for Disease Control and Prevention (CDC), providing a crucial fifth vote to strike down the order. However, with Congress heading into a seven-week summer recess having never attempted to pass such a law, activists and local residents joined Rep. Cori Bush’s (D-MO) occupation-style protest outside the Capitol building to demand the ban be extended past July 31. Although it drew many opportunistic Democratic lawmakers previously unmotivated to lift a finger for indebted lessees, it also grabbed the attention of some of the nation’s greatest civil rights leaders, including Revs. Jesse Jackson and William Barber, and succeeded in its goal, convincing Biden to reverse course on August 3.

Meanwhile, police forces across the country made preparations for removing families from their homes as soon as possible. In the Atlanta metro area alone, landlords had filed for 75,000 evictions between the spring of 2020 and spring of 2021; in South Carolina, 7,000 were filed in roughly the same time period; in Phoenix, 30,000; in North Carolina, 87,000. You get the picture. In St. Louis, Missouri, where no state ban gave renters any further protection, the sheriff’s office said it had already laid out plans for executing nine evictions per day beginning on August 9.

The ban prevented these and many more from going forward, but only on the narrow basis that making people homeless during a pandemic increases the risks of infection and transmission – the CDC didn’t ban evictions on the grounds that eviction is inherently wrong and a violation of Article 25 of the Universal Declaration of Human Rights, which affirms:

“Everyone has the right to a standard of living adequate for the health and well-being of himself and of his family, including food, clothing, housing and medical care and necessary social services, and the right to security in the event of unemployment, sickness, disability, widowhood, old age or other lack of livelihood in circumstances beyond his control.”

The ban is “targeted,” confined by an agency definition of “substantial” or “high” rates of community transmission levels of SARS-CoV-2, the virus that causes the deadly COVID-19 illness. In other words, as cases decline, these protections could disappear well before the October 3 deadline – and that’s assuming the order survives the Supreme Court, which, judging by White House Press Secretary Jen Psaki’s comments Wednesday, the administration has no more confidence in now than it did when it said two days ago it had no legal path forward.

Instead, I propose the poisonous weed of evictions be dug up by the root: cancel the rent debts altogether. Like student loan forgiveness, this task could be a simple executive order, justified by the extraordinary crisis created by the COVID-19 pandemic. Up to 11 million Americans are threatened with eviction at present, and with many deeply in debt and the $46 billion in federal aid set aside for them being disbursed as a pace that would make a snail blush, it seems unlikely a substantial number of those people will be in changed circumstances come October.

However, cancelling the rents isn’t a new idea: since the lockdowns began in March 2020, activists across the country recognized the catastrophe in the making and elevated demands for rent cancellation for the duration of the pandemic. Bereft of jobs, renters struck, refusing to pay landlords with money they didn’t have.

Many state and local governments implemented equivalent programs for businesses and homeowners, recognizing that their mass collapse would be a social disaster. Yet renters, who make up 34.7% of homes, were given no such life raft, just their eviction being forestalled until after the outbreak was contained and months of unpayable debt had piled up.

The National Apartment Association landlord advocacy group lamented last week that with the eviction ban in place, they had been “left to shoulder” an estimated $73 billion in rent debt. Minus the $46 billion already appropriated by the federal government for emergency rental assistance, that leaves just $26.6 billion for Biden to deal with – equivalent to a misplaced decimal point in the massive infrastructure, defense, and other spending bills Biden’s administration is negotiating through Congress.

In other words, it’s no great chore for a country ready to spend trillions on war and corporate largesse to save millions of its most vulnerable people from being thrown out into the cold. Biden must cancel the rents!