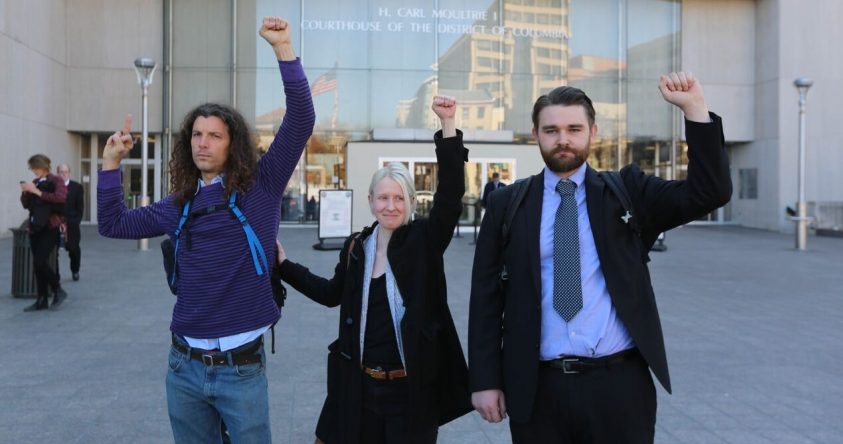 In a blow to the Trump administration’s efforts to quell dissent, on Thursday six defendants arrested at Inauguration Day “Disrupt J20” protests were found not guilty of all charges. The heavy prosecution of the “J20” case has become a bellwether for repression in the era of Trump, with this first wave of defendants facing multiple felonies and decades in prison for participating in—or simply being in proximity to—an anti-fascist and anti-capitalist mobilization.

The Inauguration Day protest was targeted by a violent police crackdown which led to more than 200 people being kettled and arrested. These protesters were then hit with conspiracy charges that local defense attorneys say are unprecedented. The prosecution is being waged by the U.S. Attorney’s Office for the District of Columbia, which answers directly to Jeff Sessions’ Department of Justice.

In the face of this crackdown, a majority of defendants signed a unity statement declaring their refusal to collaborate with the prosecution or undercut one another. They have been backed by a vast network of supporters who packed the courtroom, brought food to defendants and helped publicize a case initially met with a dearth of public attention.

The trial entered the national media spotlight when it was revealed this month that the prosecution used footage provided by the far-right media provocateurs Project Veritas and the neo-fascist militia Oath Keepers. The prosecution based its case on the principle of group liability—that everyone present at a protest is legally responsible for all acts that take place. Defendants and their supporters say this strategy is aimed at chilling dissent.

Defendants walked out of the courthouse Thursday “elated at the outcome,” according to a statement from Defend J20 Resistance. However, the defense network notes that 188 defendants still face a series of rolling trials—and supporters are now demanding that all charges be dropped and raising funds for the ongoing efforts.

Betty Rothstein of Defend J20 Resistance said the acquittal “is a clear victory for the six defendants who were just tried, and a rejection of the government’s attempt to criminalize dissent.”

In These Times spoke with one of the defendants, Michelle “Miel” Macchio, shortly after the verdict was announced. Miel is a 26-year-old street medic from Asheville, N.C. who says they traveled to the protest because they were “fed up and scared and angry and needed to voice that and show that this isn’t okay.”

Sarah: How do you feel right now?

Miel: I am feeling beyond ecstatic and so relieved that not only myself but all six trial defendants were acquitted of every single one of the charges. This is such a strong precedent for all 188 defendants in this case. We are relieved that our strategy for this early trial paid off and will help everyone else down the line hopefully get acquittals.

Everyone is jumping for joy and hugging each other and smiling, like a million pounds of weight have been lifted off our shoulders to know the first of many battles has been won. I can’t imagine a more beautiful community to be supported by.

Sarah: Can you talk a little about what the collective support has looked like?

Miel: I want to give a huge shout-out to every single person who put their lives on hold to support us. There’s been other defendants on later trial blocks, supporters from every part of this country and even further—we even had a supporter from Vancouver. The amount of emotional support we’ve had is huge. The Pots and Pans Kitchen Collective showed up every day and made sure we had lunch, and dinners were made for us.

The environment of support is one I will never forget for my entire life. People showed up at the most intense and hardest of times. Having people in court with us every day showed us that we are not alone. Many people do have to go through the system alone. I went through it with now some of my closest friends—my trial family.

Sarah: What does this case say about the power of collective, unified defense?

Miel: Without collective defense, I can’t imagine what this experience would have looked like or felt like—or how we would have gotten through it. The charges were so outlandish, we might have still gotten acquitted. But the collective defense really kept us strong and fighting through all of it.

We decided to push for earlier trials—and have people with really strong cases stand up to the prosecution first, to break down what they were trying to do to that bigger group of people.

More than 150 defendants agreed to points of unity very early on in the process. We said we were unwilling to cooperate with the government—or any coercive process to gain information about any of the other defendants. We said we would work together for the sake of all of us in our collective defense. I feel very strongly that everyone did stick to that agreement and will continue to.

Sarah: What do you want people to know about what took place during the trial?

Miel: Regardless of where people are at and how they feel about the way the government works, the First Amendment is a right we have. This case is calling into question the strength and validity of the First Amendment. People need to realize that this about more than just the people who were arrested that day. This affects everyone’s ability to stand up and speak out and be heard about the ways in which this country works—and the ways we want to see change in the world.

We need to fight back against police and state repression and support each other in the struggle. The mass media hasn’t covered this trial the way it needs to be covered. We need to keep talking and spreading the word. We need to make sure people are aware this is going on. We will continue to fight and speak out until all of us are free.

One of the most interesting moments in the case was when, on cross examination, the police officers were questioned about their biases and the disciplinary records that were obtained by our lawyers. Commander Keith Deville was found out to have made anti-Semitic, transphobic and homophobic remarks on the record that he received disciplinary actions for. We believe that played into his decision to arrest more than 200 people at an antifascist march.

During the trial, Deville repeatedly profiled the entire group as anarchists, and made this out as sinister rather than a political stance. That level of manipulation—saying these are all anarchists, let’s bring in an armada of riot cops—shows he was looking to arrest people and silence dissent. The public should know this is a political case and not just about a few broken windows.

Sarah: Do you believe the heavy prosecution was aimed at silencing dissent? Can you say more about this?

Miel: Hopefully because all six of us were acquitted, the majority of people who have evidence against them will have their charges dropped. The hope is that most people won’t have to go to trial and will have their charges dropped from this trial. That’s what we are demanding. The date for the next trial is up in the air right now. It was set for December initially, but has been pushed back to January or February. That group, through prosecutorial discretion, was given a reduction in charges. They have a status hearing in January, and then we will find out when their trial will be.

Sarah: Do you believe that a climate of repression has surrounded this trial?

Miel: Yes, definitely. It’s been very interesting to see the length to which the government has gone to try to prosecute us—going into someone’s house who they allege to have been one of the organizers and taking items like his cell phone.

The government subpoenaed Facebook about people they alleged were organizers and tried to get IP addresses of every single person who visited the Disrupt j20 website in order to incriminate us. It’s been apparent that they don’t have much to work off of. That’s why they’re trying so hard to go out of the context of what happened that day, trying to use political ties and associations to prosecute us.

The lead detective showed up in court every day to observe people who were showing up. During trial, we found a lot of information from his Twitter account showing all of his blatant hatred for Black Lives Matter—for anyone who expresses dissent.

Sarah: What motivated you to take to the streets on Inauguration Day?

Miel: Like many other people in the United States, I was horrified and appalled at what had happened. This isn’t about Trump. This is about the very system we exist under in the United States. I went to Washington, D.C. because I was fed up and scared and angry and needed to voice that and show that this isn’t okay.

I went out there as a street medic. I went there to help anyone who might have any number of needs, from hydration to pepper spray treatment. Luckily, myself and many others were there in a medic capacity to help, because the police were ruthless—they attacked without warning and without a chance to get away.

It was an honor to be there with people brave enough to speak out. Trump is still president today. Hopefully, through our dissent and this case, we can get the message out that we will not stand by and let this happen. We will continue to resist and build our movement.

I hope people are paying attention to the ongoing Standing Rock cases. While we were in trial, a number of undocumented folks were arrested for standing up to protect DACA after launching a hunger strike.

Sarah: Do you think the outcome of this case could potentially embolden others to take action?

Miel: The nature of the charges were an attempt to instill a lot of fear in people from going out and protesting. We stood up against this repression, and we hope people will feel inspired and more confident in the abilities they have to take action around issues they feel passionate about.

As a non-profit, independent publication, In These Times relies on financial support from readers to keep the lights on and our reporters on the beat, covering the critical stories of our time. This year, we need to raise an additional $35,000 online from readers like you by December 31.

Sarah Lazare is web editor at In These Times. She comes from a background in independent journalism for publications including The Nation, Tom Dispatch, YES! Magazine, and Al Jazeera America. Her article about corporate exploitation of the refugee crisis was honored as a top censored story of 2016 by Project Censored. A former staff writer for AlterNet and Common Dreams, Sarah co-edited the book About Face: Military Resisters Turn Against War.