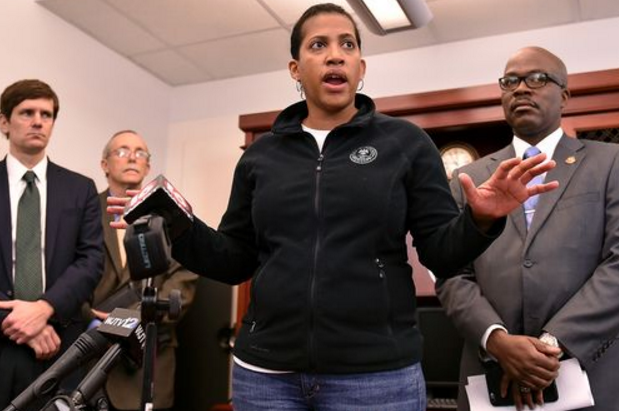 Jackson residents learned Friday that the water in some homes in the area has tested positive for lead above the recommended level. Those results came from samples gathered and tested six months ago.

The Mississippi State Department of Health confirmed that water tests from 22 percent of its 58-residence sample detected lead levels between 0.017 and 0.02 — above the federal action level of 0.015. The affected areas included 13 residences in southwest Jackson and north Jackson.

“What that means is the city is required to take additional compliance measures,” said Jackson Director of Public Works Kishia Powell. “It does not mean that the city has violated the Safe Drinking Water Act, and our water is safe.”

When asked where the residences are located, city spokeswoman Shelia Byrd said she could not release the information because the Health Department conducted the study and would have to authorize the release.

Health Department spokeswoman Liz Sharlot said the information would have to come from the city.

“Yes, they seemed to be confused about that. It was their report and up to them,” Sharlot said in an email to The Clarion-Ledger on Friday afternoon.

Powell said the city is confident the problem stems from lead plumbing in individual homes, especially older ones, and that the results do not indicate an issue with Jackson’s water system.

“We have every reason to believe this is home dependent, which means that it is related to the internal plumbing of the home, and that’s largely because we had 58 samples taken, only 13 of them exceeded the actionable level and there were homes on the same street that were sampled that did not exceed those levels,” Powell said.

Powell added that the city samples its source water daily.

The city will conduct additional sampling of the 13 homes as well as sampling of up to 100 locations. It is also required to notify all consumers of the city’s water.

“We want people to understand how they should be flushing their internal plumbing system before using water,” Powell said. “These are just measures you take.”

Sharlot said the issue of higher-than-recommended levels of lead in water is not unique to Jackson.

Before August 2014, the Jackson’s Maddox Road Well system served much of south Jackson along the Mississippi 18 corridor. At that time, the city took the well system offline and the residents’ service was switched to surface water.

The water samples in the Health Department report were taken in June, while the entire city was utilizing the city’s surface water system.

In July, the Health Department received the results of the testing. The same month, the city switched back on its well system, which continues to serve the area today.

Though the Health Department conducted the study in June and received the results indicating higher than acceptable levels of lead in July, the agency did not report the information to the city until Jan. 28.

State Health Officer Dr. Mary Currier said that is because the sampling was part of a compliance test with the Environmental Protection Agency, which does not require immediate notification.

“We don’t actually calculate whether a system is in compliance until after that period is over,” Currier said. “Now let me assure you that we’re going to take a look at how that’s done and see if we don’t need to change that.”

Currier and other state health officials assure there is no evidence to suggest Jackson residents are in harm, but Dr. Robert Cox, director of the Mississippi Poison Control and professor of emergency medicine, stressed caution.

Cox said the numbers are above the EPA’s guidance limit and those who live in the area should be tested.

“There are 13 homes where they have elevated levels, but they have hundreds of homes right next door and right down the street that we never tested,” Cox said. “There is no safe exposure for lead. The bottom line is, for young children and pregnant women, you want the lead exposure to be zero. Sometimes zero is not attainable, but you want to have it as close to zero as possible.”

Powell said in a news conference Friday afternoon that she expects the lead levels in the water from homes sampled Thursday and Friday to be lower than they were in June.

Powell explained the difference, saying, “You have to understand the way these samples are taken. Because you want to get the highest level possible in the sample, they are told to take the sample first thing in the morning after water has been sitting for more than six hours.

“When they retest, they will take the same measures, but we want to see what those levels are in those homes at that time so that we can make sure that they’re properly advised, and the reason why we send the notification to all of our customers is this is an opportunity to educate everyone on the issue so if they have any concerns they can take those measures,” Powell said.

Cox also said the numbers were “relatively low,” adding, “these are nothing close to what people in Flint, Michigan, are seeing right now.”

However, he said, “I don’t think you can ever say, ‘These are low levels. There’s nothing to worry about.’”