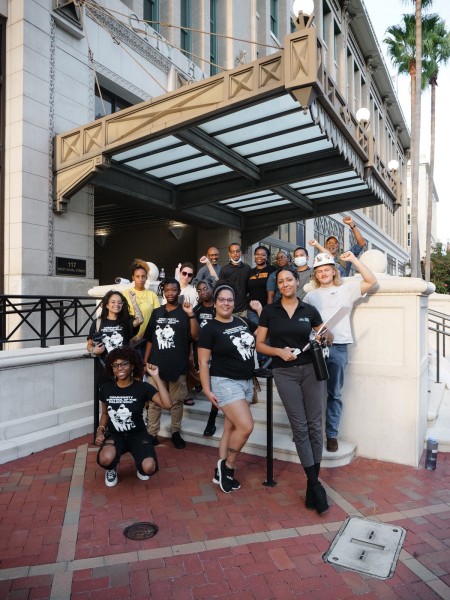 After listening to speakers outside of city hall, many people spoke at the city council meeting, demanding a People’s Budget. The proposal from the Jacksonville Community Action Committee will reallocate funds from the inflated Jacksonville Sheriff’s Office (JSO) budget back into the community.

Sara Mahmoud of the Freedom Road Socialist Organization stood at the podium and said, “JSO has consistently proven that they have no intention to protect our community but would rather brutalize and kill our residents. On top of that, as we witnessed over 1200 eviction filings in July, it is JSO who will enforce those evictions. Instead of funding measures that will help our residents in the middle of a pandemic and crisis, they’re choosing to fund police who will penalize the working class for simply being poor. This is why we’re demanding a Peoples Budget from city council, that includes proposals for a Tenants Bill of Rights and an Office of Tenant Advocacy to enforce the bill of rights.”

Shayne Tremblay, a local IBEW union member said, “I’ve said this before, and I’ll say it again: We the workers, are what make Jacksonville the city it is. We are the ones building the homes, delivering the packages, teaching our children, making the coffee, and keeping the city clean, but we are being priced out of living in our own city, and our city officials are letting it happen.”

Christina Kittle, an organizer with the Jacksonville Community Action Committee, stated that Jacksonville should enact a housing state of emergency, like Orange County, which was able to get rent stabilization on the election ballot.

Kittle explained, “There have been 20,825 evictions in Jacksonville from March 2022 to the end of July 2022. It’s clear we have a housing crisis, yet more and more funding goes to the police. It is unfair when organizations have to provide numbers and data and months of research just to be considered for funding, but a department that underperforms consistently gets millions each year. No questions asked.”

Protesters demanded that the city council focus on two initiatives that could help combat the housing crisis in Jacksonville: First, a housing state of emergency that will put in place an eviction moratorium. Second, an Office of Tenant Advocacy that will uphold a Tenant Bill of Rights to hold landholders accountable for negligence in maintenance, management or unjust rent hikes. This could be created by taking the $37million proposed for police and reallocating it.