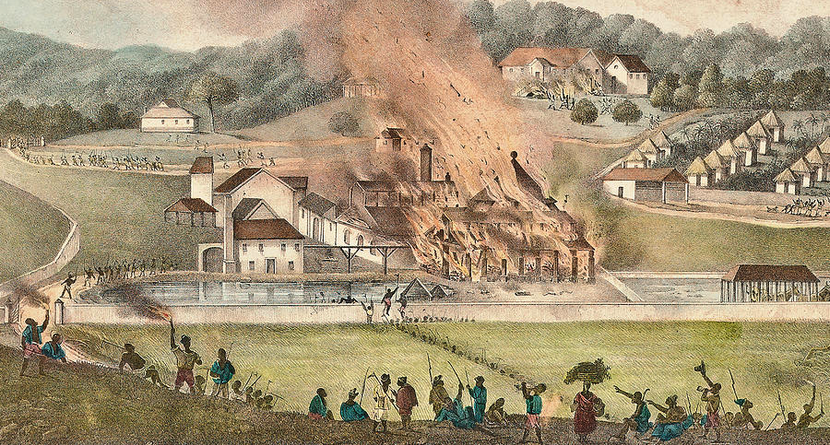 Above Photo: The destruction of the Roehampton Estate in January 1832, pictured by Adolphe Duperly. Wikimedia Commons.

On Christmas Day 1831, 60,000 enslaved Africans in Jamaica rose up against their masters.

The largest uprising ever in the British West Indies, and a milestone on the road to abolition a few years later.

In late December 1831, white Jamaican planters slept restlessly in their beds. Rumors had long been circulating of disquiet among the enslaved Africans residing in plantations across the island. Before they knew it, the island would be set ablaze as tens of thousands armed themselves to fight for their freedom.

As it became known, the Christmas Rebellion (or Baptist War, named so after the faith of many of its key conspirators) was the largest uprising of enslaved Africans in the history of the British West Indies, and directly influenced the abolition of slavery in 1833 and full emancipation in 1838.

To understand the dynamics at play during the uprising, it’s vital to understand the social structure of nineteenth-century colonial Jamaica. Jamaica, like much of the West Indies, was what was known as a plantocracy. In this arrangement, a minority of white European settlers, human traffickers, and plantation owners dominated the majority of enslaved Africans on the island.

Conscious of their minority (Africans outnumbered whites twelve to one), planters deployed ferocious violence to ‘discipline’ their slaves at home, and used their substantial wealth and influence to lobby against abolitionists in Parliament and the press. But despite their efforts, the sun was setting on slavery in the British Empire, and hopes of emancipation around the corner emboldened the enslaved population to take matters into their own hands.

Samuel ‘Daddy’ Sharpe, a Black Baptist deacon, organized enslaved Africans to participate in a peaceful general strike on 25 December 1831, demanding wages and increased freedoms. While non-violence was intended, Sharpe was under no illusions that the infamously violent planter class would respond in kind.

Enlisted to be his military commanders were fellow literate enslaved Africans spanning several different estates, illustrating the effectiveness of the vast communication network known colloquially as the slave ‘grapevine’. Also crucial was the limited degree of freedom given to Sharpe: as a Deacon, he had the ability to move around the island and secretly organize after prayer meetings.

The initially peaceful demonstration soon became a violent uprising, and out of a population of 600,000, an estimated 60,000 took up arms to resist their oppression. Any pretense of a peaceful demonstration was lost when Kensington Estate was set ablaze by enslaved rebels, with the Rebellion taking place in earnest soon after.

Aside from providing an insight into mass resistance against slavery, the Christmas Rebellion also provides a valuable case study into the complexities of governing a plantocracy and the contradictions of slave resistance. Seeking assistance to put down the rebellion, the colonial authorities enlisted the help of the Acompong and Windward Maroons—both disparate, militant guerilla organizations of escaped former slaves.

The Maroons had gained a degree of independence following their own Maroon Wars in the eighteenth century. As a result of treaties signed with the colonial authorities following the First Maroon War of 1728-139, signatory Maroon factions were granted small parcels of land which soon became known as Maroon towns.

The caveat to this treaty was that these Maroon towns would be assigned a white superintendent, and that Maroon fighters would be required to assist colonial authorities in putting down future uprisings by their enslaved brethren and catching runaway slaves. This arrangement was resisted by many Maroon factions, but they would later find themselves fighting opposite their fellow oppressed Africans.

The uprising led to the deaths of fourteen planters and two hundred enslaved Africans, with property damage worth an estimated £124 million today. African rebels burned hundreds of buildings across the island, including Roehampton Estate, the blazing scene of which was later recreated by French lithographer Adolphe Duperly (pictured). But it was the aftermath of the uprising which saw some of the most sadistic violence take place.

The white Jamaican plantocracy responded to the Rebellion in the only language it knew: unspeakable brutality. The reprisals of the Jamaican planter class in response to such an affront to their authority was merciless and indiscriminate. Immediately after the Rebellion, approximately 340 Africans were executed using a cruel and gruesome variety of methods. The majority were hanged, and their heads displayed in plantations across the island to serve as a warning against future uprisings.

Beyond the pale for Parliament, though, was the tarring and feathering of a white missionary suspected of fanning the flames of rebellion. It’s difficult to find a clearer example of the racialized priorities of the British Empire than this—rather than the brutal murder of thousands of Black Africans (perceived as nothing more than chattel), it was the punishment of a white missionary by white planters that drew significant protest. The missionary’s filthy neckerchief was paraded around Britain to the horror of those who saw it, bolstering the cause of white abolitionists.

Today, it wouldn’t be too far off the mark to call Sharpe an advocate of a form of liberation theology. Sat in jail following his failed uprising, Sharpe proclaimed that he learned from the Bible that ‘whites had no more right to hold Black people in slavery than Black people had to make white people slaves… I would rather die on yonder gallows than live in slavery.’ Sharpe was executed on those gallows on 23 May 1832. He’s remembered as a National Hero of Jamaica, with his likeness printed on the $50 Jamaican banknote.

The popular narrative would have us believe that the British Empire chose to fully emancipate the thousands of African slaves in Jamaica in 1838 out of moral duty. But the truth is quite the opposite. Despite its failure, the sheer scale of the Christmas Rebellion, coupled with the constant resistance of enslaved Africans, demonstrated that the centuries-old practice of slavery had become untenable.

The Christmas Rebellion directly precipitated the 1833 Slavery Abolition Act, which on its surface abolished slavery, but also stipulated that formerly enslaved Africans would have to undergo a period of ‘apprenticeship’ under their old masters before they could be freed. It was not until 1838 that full emancipation was granted by Britain.

In addition, slave owners, the Jamaican planter class among them, were awarded a handsome £20 million in compensation—a sum comprising forty percent of the Treasury’s national budget at the time, and worth more than £17 billion today. This monumental debt was only paid off in 2015, meaning that the tax revenue generated by living British citizens, potentially among them the descendants of enslaved Africans, has been used to contribute to recompense for human traffickers. The former enslaved Africans, subject to untold brutality for generations, got nothing.

This year, the Jamaican government was unsuccessful in its petition for £7 billion in reparations from the British government. The latter dismissed Jamaica’s claims due to questions of practicality. Who would pay for it? And to whom?

No such questions were asked when the British government compensated slaveowners for the loss of their ‘property’. As we remember the Christmas Rebellion and the bravery of those Africans who struggled against near insurmountable odds, we must also remember that the long fight for justice remains incomplete.