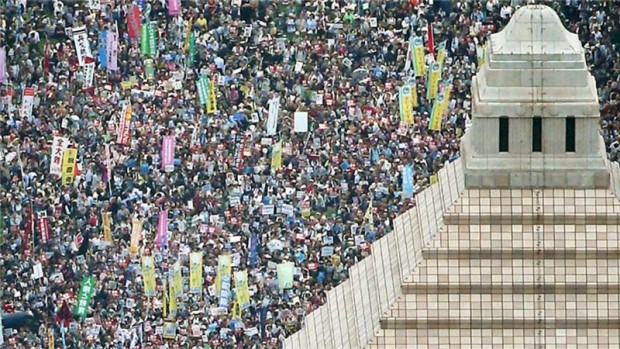 Above photo: Organisers said about 120,000 people took part in Sunday’s rally in the capital [Reuters]

Protesters rally outside parliament to oppose new laws that could see troops engage in combat for first time since WWI.

Tokyo, Japan – Tens of thousands of protesters have rallied outside Japan’s parliament to oppose legislation that could see troops in the officially pacifist nation engage in combat for the first time since World War II.

In one of the summer’s biggest protests ahead of the new laws anticipated passage next month, protesters on Sunday chanted “No to war legislation!” ”Scrap the bills now!” and “Abe, quit!”

Organisers said about 120,000 people took part in the rally in the government district of Tokyo, filling the street outside the front gate of the parliament, or Diet. Similar demonstrations were held across nation.

The law would expand Japan’s military role under a reinterpretation of the country’s war-renouncing constitution.

In July, the more powerful lower house passed the bills that allow the army, or Self Defence Force, to engage in combat when allies come under attack even when Japan itself is not.

The upper house is currently debating the bills and is expected to pass them by late September, making it law.

Prime Minister Shinzo Abe and his supporters say the bills are necessary for Japan to deal with the changed security environment in the world.

Public polls showing the majority of people oppose the bills and support for Abe’s government is declining.

“In order to make the world a better place, where the life of even a single child is taken away, we must take action now or Japan will make a turn for the worse. That’s why I came today,” Mami Tanaka, 35, who joined the rally with her husband and their three children, told the Reuters news agency.

Activists posted the following footage from the protest:

More information about the proposed law from Rachel Clark:

This is what has been discussed at Japanese Diet with regards to recruitment of Self-Defense Forces (SDF). The current administration is trying to make SDF more like a standing forces so that they can send them even to the Middle East as the US demands. Because of this political climate, many young officers are quitting SDF.

In order to stop losing young officers, they came up with a new plan to collaborate private sectors. Here is my translation of the below Japanese chart:

How this program works:

3) SDF treats them as SDF officers until the end of their term. They can obtain certain certificates as they serve at SDF.

4) After the term, they will return to their original employers.

5) During their internship, their salary will be paid by the government.

1) SDF-trained “fit” personnels can be obtained every year.

2) SDF provides trainings focusing on “basic education as an adult” with teamwork, and proactive skills.

3) Corporations can contribute to the nation’s defense.

1) They’ve been suffering with recruiting new officers for a long time. This new program will provide them with continuous flow of young and capable personnels every year.

2) They can avoid competition with private sectors in recruiting freshmen. This is win-win situation for both DOD and corporations.

3) By developing better relationship with private sectors, DOD may be able to use former interns as “reserve” in the future.

1) DOD needs to establish a model case of this program.

2) DOD needs to plan an exam and other frame works.

One of comments is saying: DOD is planning a new type of recruiting more officers! Freshman employees go to SDF as interns for two years. They cannot refuse this “corporate order” and they may be sent to combat zones in case of wars. The government may offer subsidies and easy access to winning in open bids of public projects, to corporations in exchange with getting their employees as interns. This is a horrifying new system!