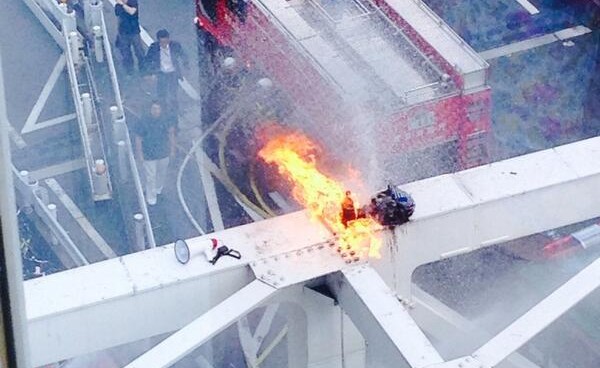 Above: A middle-aged man speaking before he set himself on fire in the center of the Japanese capital in a protest against government plans to change Japan’s pacifist constitution. Authorities hosed the man down and immediately rushed him to hospital.

Note: After World War II the new Japanese Constitution took a pacifist approach and did not allow the government to maintain military forces a Japan renounced war. The current Prime Minister, Shinzo Abe is seeking to amend Article 9 of the Constitution which reads:

ARTICLE 9. Aspiring sincerely to an international peace based on justice and order, the Japanese people forever renounce war as a sovereign right of the nation and the threat or use of force as means of settling international disputes. (2) To accomplish the aim of the preceding paragraph, land, sea, and air forces, as well as other war potential, will never be maintained. The right of belligerency of the state will not be recognized.

Witness report: I witnessed this. He was sitting reading perfectly calmly from some papers he had with him in a bag and occasionally drinking from a bottle. He spoke to the police officers on several occasions – seemingly in a reassuring way. Inflatable mattresses were set up under the bridge, and soft mats on the walkway. However, when fire officers produced a ladder and prepared to scale the girders, the man – still sitting – poured a bottle of something (petrol?) over his head. He then stood, reached into his bag for a lighter, and set himself on fire. At that point I had to look away, but it appeared as if some of the waiting officers may have got caught in the inflammation. Tragic and horrifying.

It was a quiet Sunday afternoon in the early summer, albeit on a weekend marked by many protests against Prime Minister Shinzo Abe’s controversial collective self-defense law changes. But the ordinariness and calm of the shopping in central Tokyo was broken by a shocking suicide (and at least, suicide attempt). At around 1-2pm a man sat on the girders above a pedestrian footpath near Shinjuku Station’s busy South Exit area with a megaphone and two bottles containing dark liquid. He wore a suit and sat on a small mat. He spoke into the megaphone, announcing that he was going to kill himself in protest at the government’s push to involve Japan more in war. He then apparently set himself on fire, as graphic pictures on social media are allegedly showing. Details are very fuzzy at this time. He seemed to use some kind of gasoline or alcohol, and judging by his appearance from photos looks like he was in his sixties. This means he would remember Japan’s previous logistical involvement in America’s war in Vietnam in previous decades, which prompted mass protests and also at least one similar act self-immolation. And it goes without saying that this protester’s public suicide recalls those of the Buddhist monks in Vietnam in the 1960′s.

At the time of writing nothing has been reported in the mainstream media nor have any details about the victim’s name been announced. It is unknown if the man survived, though he was filmed being extinguished by the fire services after he fell off the girders onto the bridge below.