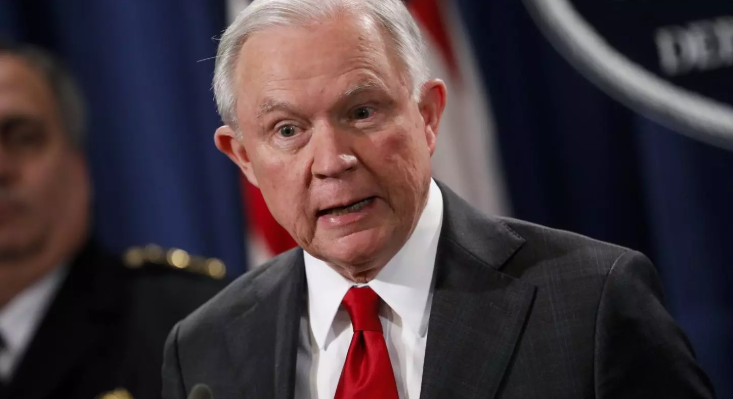 Jeff Sessions Interrupted By Religious Leaders During Speech, Tell Him To ‘Repent’ And ‘Care For Those In Need’

Above Photo: Attorney General Jeff Sessions speaks at a press conference about the apprehension of Cesar Sayoc after the spate of mail bombings, on October 26.PHOTO BY AARON P. BERNSTEIN/GETTY IMAGES

Attorney General Jeff Sessions had just begun his speech at the Boston Lawyers Chapter of the Federalist Society on Monday when he was interrupted by two religious leaders in protest.

Sessions was due to speak about “the future of religious liberty” when a man who identified himself as a “fellow United Methodist,” the same denomination as Sessions, stood up and began to protest, according to footage of the speech.

“Brother Jeff, as a fellow United Methodist, I call upon you to repent,” the man said. “To care for those in need. To remember that when you do not care for others, you are wounding the body of Christ.”

The man was likely referring to the Trump administration’s immigration policies. The latest immigration battle has centered around a caravan of thousands of Central American asylum seekers making their way to the U.S.-Mexico border. President Donald Trump has vowed that they will not be allowed into the U.S., despite their intentions to apply for asylum over fears of death and violence in their home countries.

When the administration was separating thousands of migrant children from their parents as part of its “zero tolerance” immigration practice this summer, more than 600 United Methodist clergy and church members in June sought to bring formal church charges against Sessions. They alleged that the immigration policies implemented by Sessions amounted to child abuse, immorality, racial discrimination and “dissemination of doctrines contrary to the established standards of doctrines” of the United Methodist Church.

“Well, thank you for those remarks and attack,” Sessions said to the first protester. “But I would just tell you we do our best every day.”

The man was escorted away by police, only to immediately be followed by another religious leader who stood up in protest. He identified himself as the “pastor of a Baptist church.”

Sessions said he would not allow the two men to perform a “heckler’s veto” and prevent him from making his speech.

“I don’t think there’s anything in the scripture and my theology that says a secular nation-state cannot have lawful laws to control immigration in its country,” Sessions said. “[It’s] not immoral, not indecent and not unkind to state what your laws are and then set about to enforce them, in my view.”

Jeff Sessions responds to protesters: “I don’t believe there’s anything in my theology that says a secular nationstate cannot have lawful laws to control immigration … not immoral, not indecent and not unkind to state what your laws are and then set about to enforce them” pic.twitter.com/oGjtMM67ru

As the migrant caravan makes its way through Central America and into Mexico, Trump has continued to peddle false conspiracy theories about its members. There has been no evidence of “unknown Middle Easterners” who could be terrorists, or that “gang members” were mixed into the group. The president later admitted “no proof of anything” but thought there was “a very good chance you have people in there” who are from the Middle East or involved in gangs.

Many of the migrants have said they are fleeing violence, some of it gang-related, from their home countries in Central America.

Trump repeated his theory in a tweet on Monday about the presence of gang members.

“Many Gang Members and some very bad people are mixed into the Caravan heading to our Southern Border,” Trump said. “Please go back, you will not be admitted into the United States unless you go through the legal process. This is an invasion of our Country and our Military is waiting for you!”

Many Gang Members and some very bad people are mixed into the Caravan heading to our Southern Border. Please go back, you will not be admitted into the United States unless you go through the legal process. This is an invasion of our Country and our Military is waiting for you!

Trum has issued warnings on Twitter and in public for those traveling in the caravan to “go back to your Country and if you want, apply for citizenship like millions of others are doing!”

The Pentagon reportedly approved an additional request by Trump last week to send hundreds of U.S. troops to secure the border and provide border control and customs with logistical support. Multiple reports on Monday suggested the Pentagon could end up sending 5,000 active-duty troops to the border.