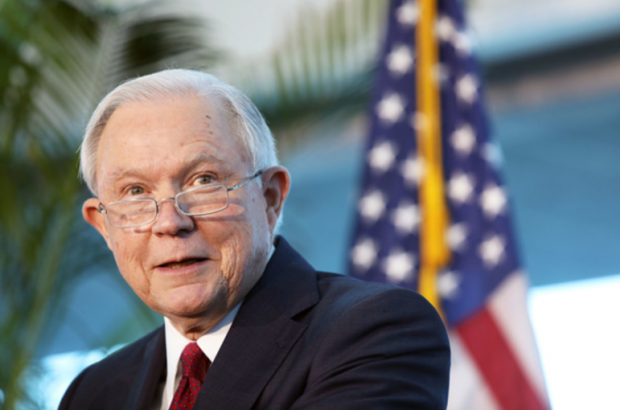 Jeff Sessions Is Met With Protest At Georgetown Law

U.S. Attorney General Jeff Sessions received a frosty reception from some students and faculty at Georgetown University Law Center, where he delivered a talk on free speech Tuesday.

In anticipation of his arrival, 30 faculty members on Monday released a letter stating that Sessions was an inappropriate speaker to tackle that subject because he and the Trump administration have repeatedly attacked First Amendment rights. About 130 students claimed on Monday that their tickets to Sessions’ talk were revoked.

“It is extraordinarily hypocritical that AG Sessions wants to lecture future attorneys about the importance of free speech on campus while excluding the wider student body from his very own ‘safe space,’” said Daniel Blauser, president of the campus’ chapter of the American Constitution Society.

On Tuesday, about 100 protestors gathered  in front of the law school, some with duct tape on their mouths and carrying signs critical of Sessions, according to The Washington Post.

Sessions’ speech comes as several college campuses have been rocked by free speech controversies. Violent protests or the fear of such have led to the cancellation several planned speeches by conservatives at the University of California, Berkeley.

“Freedom of thought and speech are under attack,” Sessions said. “It is transforming into an echo chamber of political correctness and homogeneous thought—a shelter for fragile egos.”

At Georgetown, the faculty, staff and students have “broad latitude to invite speakers,” said Georgetown Law spokeswoman Tanya Weinberg in an emailed statement.

“Similarly, it affords the right to members of our community to share their own views and objections about an invited speaker, and to protest peacefully in a manner that does not interfere with the invited speaker’s right to speak, the audience’s right to listen, and the safety and security of our campus,” she said.

Barnett said on Twitter Tuesday morning that the RSVP site for the invitation-only event was incorrectly placed on Facebook, which is why some students were later told they could not attend. He added that many events at the law school are only open to those specifically invited.

The Washington Post reported on Tuesday that a spokeswoman for the law school said the individuals invited to attend the talk were culled from previous attendees of the center’s events, as well as students in Barnett’s classes. The guest list was not designed to ensure a crowd sympathetic to Sessions, she added.

But some students felt otherwise.

“We are deeply disappointed in Georgetown Law’s invitation process to AG Session’s free speech talk,” said David Panzarella, president of the school’s ACLU chapter. “It undercuts the spirit of the First Amendment and stifles the robust debate characteristic of a top tier law school. Campus events on free speech should not freeze out diverse perspectives.”

The letter from the law professors highlights three specific attacks on free speech: President Donald Trump’s Twitter denunciations of recent athlete protests; the Department of Justice’s prosecution of a woman who laughed during Sessions’ confirmation hearing; and the department’s attempts to obtain information about people who organized an anti-Trump protest this summer.

“This kind of government chilling of speech is precisely what the First Amendment to the United States Constitution is meant to prevent,” the letter reads. “A man who fails to recognize paradigmatic violations of the First Amendment is a poor choice to speak about free speech on campuses.”

The Georgetown law campus has hosted a number of big names in the past week. Supreme Court Justice Ruth Bader Ginsburg delivered a talk to first-year students on Sept. 20, which was attended by newbie law student Tiffany Trump. That same week, the school announced that former acting U.S. Attorney General Sally Yates would spend the fall semester as a distinguished lecturer. Yates was fired by Trump mere days after he took office for instructing department attorneys not to enforce the president’s travel ban.