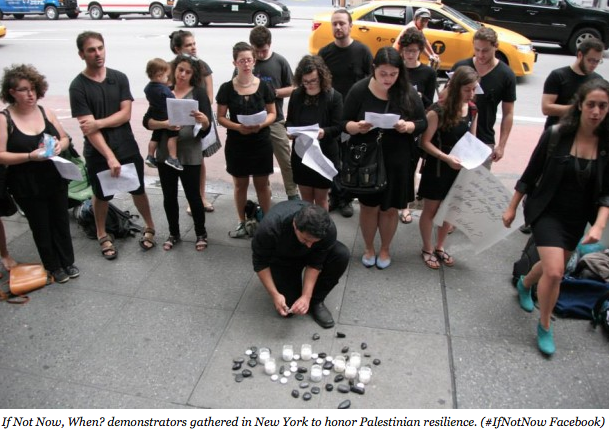 Over the past few weeks as the Israeli offensive in Gaza brings more and more tragic consequences for Palestinians, there have also been large solidarity demonstrations throughout the world calling for an end to the occupation of Palestine.

Among the youngest and most remarkable of these groups protesting against the destruction in Gaza is If Not Now, When? After only making its debut on social media last Wednesday, the group marked the beginning of Tisha B’Av, the Jewish period of mourning for the difficulties the Jewish people have endured,  by reciting the Kaddish, the Jewish prayer of mourning, for all Palestinian and Israeli victims of the war so far. They also read the names of the victims in front of the Conference of Presidents of Major Jewish Organizations last Monday July 28th.

Nine #IfNotNow organizers were arrested after occupying the building where the conference took place after “their request to meet with the president … was denied,” according to the #IfNotNow Facebook page. The growth of the organization itself has been astounding. In just under a week the group has gained over 1,800 likes on Facebook and has seen incredible engagement on Twitter with the use of the hashtag #IfNotNow.

Tamara Shapiro, an activist with #IfNotNow and founder of J Street U, expressed that #IfNotNow was born out of a need for a space for those in the Jewish community to express their outrage and protest what’s happening.

“The spaces that have been created to supposedly do this are not working,” said Shapiro. “People I know who are deeply connected to the Jewish community and have progressive values and people who aren’t necessarily strongly connected to the religion but feel outraged that things are happening in their name … needed a space to speak out.”

Though united by a common feeling of resentment and anger towards the war in Gaza and the occupation of Palestine, the group is diverse in how they practice Judaism, and come from various backgrounds and perspectives.

“We want this to be inclusive of people who are feeling similar things to us,” explained Shapiro. “A lot of the organizations that already exist have really hard lines on where they stand. We haven’t taken a hard line.”

Instead of taking a rigid political position, #IfNotNow has taken a much more human outlook than most groups. They call on the leaders of major Jewish institutions to stop supporting the ongoing military onslaught that is taking Palestinian and Israeli lives. They make this in their open letter which was recited in their action on Monday. The letter speaks of their grief for the amount of loss that has happened to Palestinians, and the needless loss of Israelis that have been fighting in Gaza. They recognize the immense inequality Palestinians face. They say that they are, “Outraged that so many speak of Palestinians as if their lives were worth less than our own, outraged at the justifications offered for the killing of so many.” They “reject the view that ‘we have no choice,’ that this violence is necessary and inevitable.”

#IfNotNow members are standing up as Jews to oppose the war and occupation, and to mourn the immense loss, as Shapiro said, “in a Jewish way that seems important at a time like this.” They are part of a movement of trailblazers who are not only recognizing the humanity surrounding the conflict, but also rejecting the narrative being repeated by many, and advocating that occupation and the dehumanization of Palestinians must end in order for there to be peace, freedom, and dignity for all who reside in Israel and Palestine.