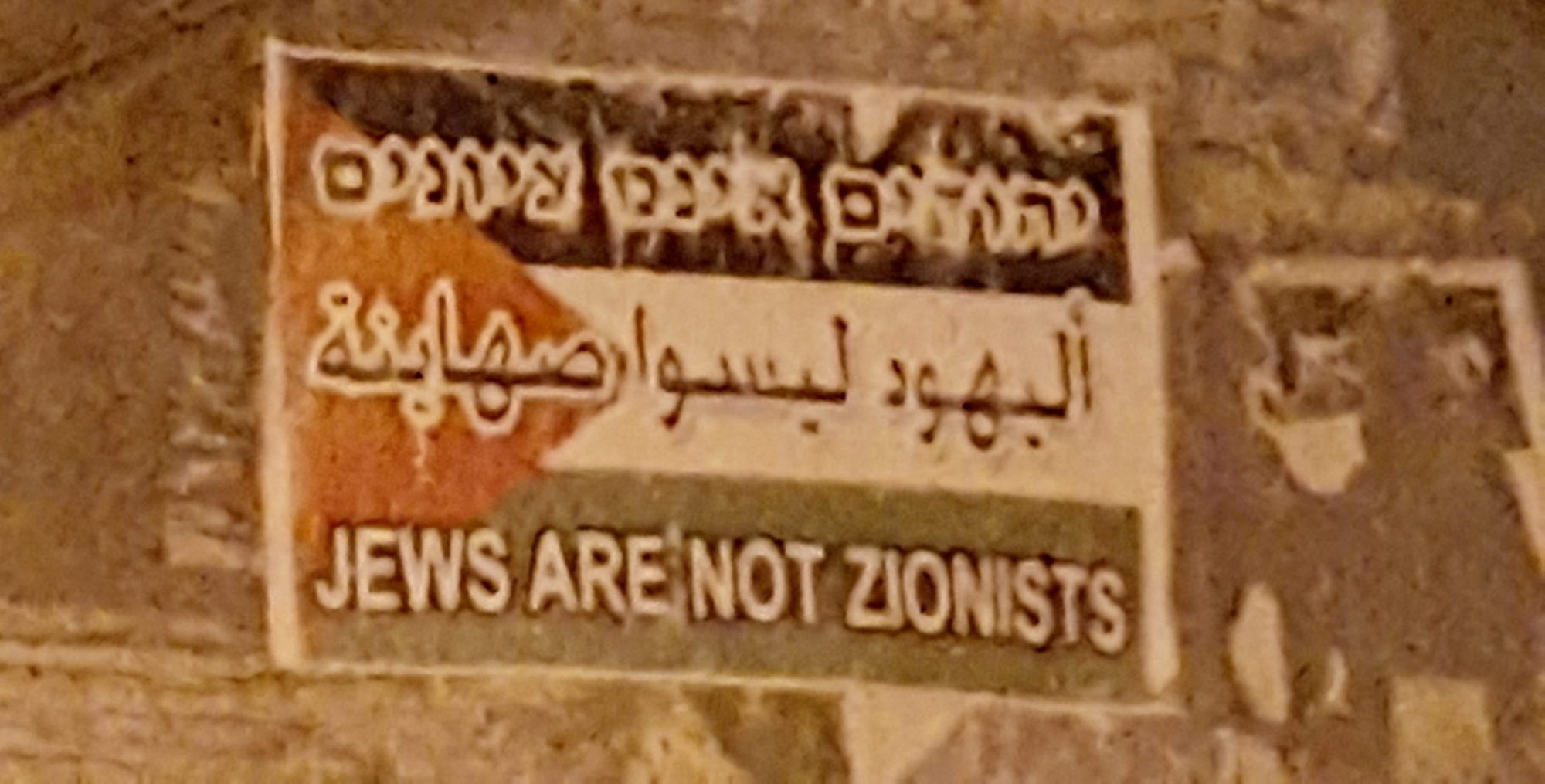 Above photo: Sign on the wall in an anti-Zionist Jewish neighborhood in Jerusalem. Margaret Flowers.

“Our response to the false designation will be to… challenge Israeli policies of occupation and apartheid and galvanize public opinion for freedom and justice in Palestine,” vowed CodePink’s Medea Benjamin.

Pompeo became the first top U.S. diplomat to visit an Israeli settlement in the unlawfully occupied West Bank of Palestine as he lunched at a winery in Psagot, located on a hill formerly known as Jabel Tawil until Israeli forces conquered it in 1967. Jewish families from Jerusalem began building and expanding Psagot in 1981 and today around 1,880 Israelis reside there. As with all settlements, Palestinians are prohibited from living there.

Pompeo’s provocative visit comes just over two weeks after Israeli forces bulldozed Khirbet Humsa, a Bedouin hamlet in the Jordan Valley, rendering scores of Palestinians including more than 40 children homeless during a storm. More than 40 House Democrats responded by unsuccessfully imploring Pompeo to condemn the demolition, which United Nations human rights officials on Thursday denounced as a war crime.

Instead, Pompeo doubled down on U.S. support for Israel. At a joint press conference with Israeli Prime Minister Benjamin Netanyahu in Jerusalem, the secretary announced that products made in the settlements—which have been widely condemned as a form of apartheid—may now be labeled “Made in Israel.”

.⁦@SecPompeo⁩ you can call #BDS & Israeli settlements anything you want, but it won’t change the truth. Settlements are illegal land theft & a violation of Palestinian rights. And BDS is legitimate non-violent resistance to these Israeli violations https://t.co/UHMomSqTVB

“For a long time, the State Department took the wrong view of settlements,” Pompeo said at the press conference. “It took a view that didn’t recognize the history of this special place. And instead, now, today the United States Department of State stands strongly to the recognition that settlements can be done in a way that are lawful and appropriate and proper.”

Pompeo was referring to the 1978 State Department legal opinion (pdf)—which held until the Trump administration officially repudiated it last year—that as a “belligerent occupant,” Israel had no right to establish such settlements. Under international law including the Fourth Geneva Convention, both Israel’s occupation and settlements are illegal.

Noting that the Psagot winery “and other businesses have been targeted by pernicious E.U. labeling efforts that facilitate the boycott of Israeli companies,” Pompeo declared that the “U.S. stands with Israel and will not tolerate any form of delegitimization.” To that end, he said that the State Department “will regard the global anti-Israel BDS campaign as anti-Semitic.”

Pompeo, who is emerging among fervently Zionist evangelical Christians as a possible 2024 presidential contender, then attacked BDS—a Palestinian-led international movement of activists, academics, artists, and others driven by the principle that “Palestinians are entitled to the same rights as the rest of humanity”—as a “cancer.”

Tamam Quran, a 25-year-old Palestinian American high school teacher whose family’s ancestral lands were seized by Israel, told the Guardian on Thursday that her grandmother used to pick grapes on the hill where Psagot now stands.

“Growing up a five-minute walk from where we are here now, I woke up every morning to the settlement,” Quran said. Condemning the might-makes-right ethos of the U.S.-backed occupation, she lamented that “nothing is going to happen” in response to ongoing Palestinian dispossession and that “there are no consequences to [Israel’s] actions.”

BDS—which seeks to apply economic and cultural pressure to isolate Israel and ultimately change its policies and actions much as the anti-Apartheid movement did in the decades leading up to majority rule in South Africa—includes many Israeli and diaspora Jews and Jewish-led organizations. One of these, Jewish Voice for Peace, responded to Pompeo’s declaration by tweeting, “We are proudly Jewish, proudly anti-Zionist, and proudly pro-BDS.”

We are proudly Jewish, proudly anti-Zionist, and proudly pro-BDS.

We are not afraid of you, Mike. https://t.co/gAkYwdF1VS

Ariel Gold, national co-director of the women-led peace action group CodePink and an outspoken BDS supporter, said in a statement that “Pompeo’s designation of the BDS movement as anti-Semitic and illegal shouldn’t surprise anyone, given the Trump administration’s efforts at every turn to prop up the apartheid state of Israel and shield it from international criticism.”

“While the false designation of BDS as anti-Semitic won’t change the fact that BDS is a legitimate nonviolent tactic, it risks hindering efforts to recognize real anti-Semitism,” warned Gold. “As an American Jew, I have watched in horror as anti-Semitism has risen dramatically under [Donald] Trump’s presidency, thanks to his administration’s and the Republican Party’s willingness to trade in and tolerate anti-Semitic tropes.”

Pompeo's new attempt to shut down the movement for Palestinian rights will not succeed. Our joint struggles against all forms of racism, including antisemitism & Israeli apartheid, will continue by the vast numbers of us committed to safety and freedom. https://t.co/DKtxaRFklb

CodePink co-founder Medea Benjamin—who is also Jewish—said that “it’s outrageous that the U.S. government would label a Gandhi-like boycott movement that has historically been the bedrock of nonviolent social change movements as anti-Semitic.”

“Our response to the false designation will be to increase all efforts to challenge Israeli policies of occupation and apartheid and galvanize public opinion for freedom and justice in Palestine,” vowed Benjamin. “We remain committed to using nonviolent BDS tactics to reveal corporate complicity in Palestinian human rights violations.”

The BDS movement itself released a statement Thursday calling it “quite ironic that the Trump administration, prompted by Israel’s apartheid regime, continues to enable and normalize white supremacy and anti-Semitism in the U.S. and worldwide while simultaneously smearing BDS, a leading Palestinian-led human rights movement and its millions of supporters worldwide as ‘anti-Semitic.'”

“BDS has consistently and categorically rejected all forms of racism, including anti-Jewish racism, as a matter of principle,” it said.

The statement added that:

The fanatic Trump-Netanyahu alliance is intentionally conflating opposition to Israel’s regime of occupation, colonization, and apartheid against Palestinians and calls for nonviolent pressure to end this regime on the one hand with anti-Jewish racism on the other, in order to suppress advocacy of Palestinian rights under international law. This fraudulent revision of the definition of anti-Semitism has been condemned by dozens of Jewish groups worldwide and by hundreds of leading Jewish and Israeli scholars, including world authorities on anti-Semitism and the Holocaust.

By this revisionist and fraudulent definition, even human rights organizations that are not part of the BDS movement but endorse banning settlement goods, for instance, as well as some 22% of Jewish Americans under the age of 40, who support a full boycott of Israel according to a recent poll, would also be designated as “anti-Semitic.”

The BDS movement for Palestinian freedom, justice, and equality, stands with all those struggling for a more dignified, just, and beautiful world. With our many partners, we shall resist these McCarthyite attempts to intimidate and bully Palestinian, Israeli, and international human rights defenders into accepting Israeli apartheid and settler-colonialism as fate.

Israel has responded to BDS with actions critics have called heavy-handed and anti-democratic, such as by passing a 2017 law barring entry into the country of foreigners—including Jews—who publicly call for boycotts against it. Pro-Israel interests in the United States have also pushed—sometimes successfully—for laws and other measures banning Americans from criticizing Israel.

We just launched a new site tracking legislative efforts to silence Palestine advocacy in the US!

Learn about bills in your state and explore our interactive map of bills by type, status, and year.

Check it out here: https://t.co/KEIFRrXs7n#RightToBoycott

Numerous people in the United States have lost or been denied employment or have faced other sanctions for speaking out against Israeli policies and actions in Palestine and elsewhere that prominent international critics have called apartheid, ethnic cleansing, and even genocide.