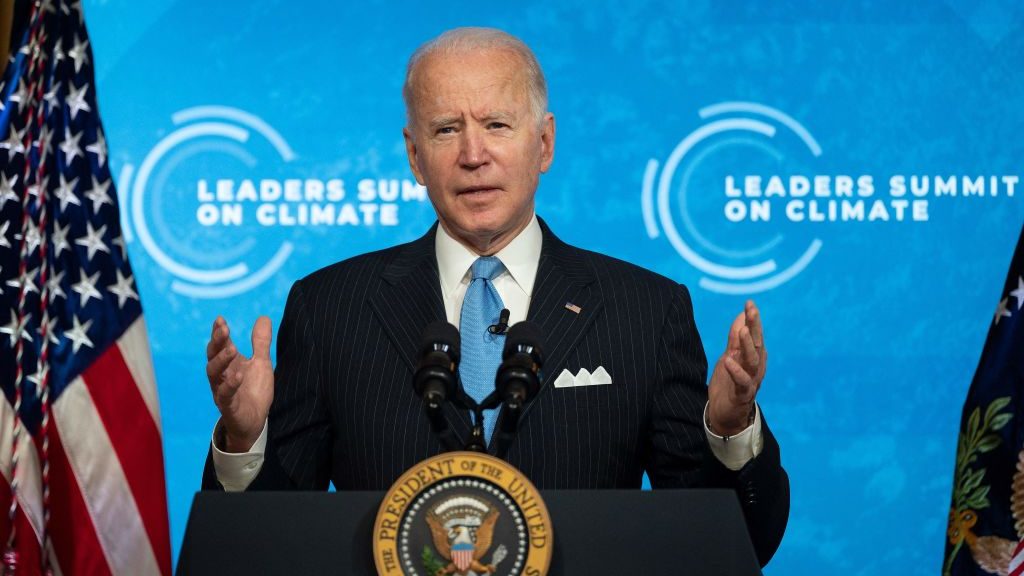 Above photo: US President Joe Biden delivers remarks and participates in the virtual Leaders Summit on Climate from the White House in Washington, DC, 2021. Jim Watson / AFP via Getty Images.

It doesn’t do nearly enough to address the US’s climate impacts on the rest of the world.

On Thursday, President Joe Biden announced that the United States will cut emissions by 50 to 52 percent below 2005 levels by 2030 as part of its commitment to the 2016 Paris Agreement on climate change.

Biden’s announcement came during the administration’s virtual Leaders Summit on Climate, which aimed to push climate action around the world.

A key goal of the summit was “to keep a limit to warming of 1.5 degree Celsius within reach.” A 2018 special report by the Intergovernmental Panel on Climate Change (IPCC) concluded that global greenhouse gas emissions need to drop by 50 percent by 2030 to keep warming below 1.5  degrees Celsius and avoid the worst impacts of climate change.

But Biden’s emissions pledge will not do enough to reach this goal, according to an analysis by Climate Action Tracker, a scientific organization that measures governmental climate action.

The group found that Biden’s new target is “considerably stronger” than the United States’ previous Paris Agreement goal under President Barack Obama, which entailed cutting emissions to 26 to 28 percent below 2005 levels by 2025. However, the analysis concluded that Biden’s plan still falls 5 to 10 percent short of what’s needed to keep warming within 1.5 degrees by 2030.

But even if the United States reduced its emissions target by that additional amount, experts say the country still wouldn’t be contributing its fair share to the global effort to combat the climate crisis. Considering the country’s past impacts on the planet, and the resources it has available to help developing nations address climate change in other parts of the world, critics say the United States is duty bound to adopt a far more ambitious and far-reaching climate action plan.

Biden’s pledge “doesn’t go far enough, and we expect much more, especially because the Biden administration is viewed as being sympathetic to environmental and climate justice,” said Meena Raman, a Malaysia-based legal adviser and senior researcher at the Third World Network (TWN), a nonprofit international research and advocacy organization involved in development issues and North-South affairs.

“The U.S. has been a laggard in so far as climate action is concerned,” Raman added, pointing to the country’s failure to ratify the Kyoto Protocol and its history of opposition to climate action during UN climate change negotiations.

The Biggest Polluter in History

The idea that global emissions need to fall by 50 percent by 2030 “is a global average target,” said Jason Hickel, an economic anthropologist from Eswatini, the Southern African country formerly known as Swaziland. Hickel serves on the Statistical Advisory Panel for the UN Human Development Report 2020, the advisory board of the Green New Deal for Europe, and on Harvard’s Lancet Commission on Reparations and Redistributive Justice.

To meet that target, Hickel told the Daily Poster that the United States and other high-income nations “have a responsibility under the terms of the Paris Agreement to cut emissions much faster than [Biden’s pledge], given their overwhelming contributions to historical emissions.”

The 1992 United Nations Framework Convention on Climate Change (UNFCCC), the first major international climate change treaty, acknowledged that countries should address the crisis “in accordance with their common but differentiated responsibilities and respective capabilities and their social and economic conditions.” The Paris Agreement is a treaty within UNFCCC.

This meant developed countries should bear more responsibility in global sustainability efforts, based on the outsized impact their societies have on the environment and the technologies and financial resources they command.

Therefore, said Hickel, Biden’s announcement “might sound ambitious,” but it is “totally inadequate and flies in the face of climate justice.”

A 2020 paper by Hickel explored the concept of “carbon budget,” the idea that the atmosphere is part of the global commons and all countries should only emit their fair share of carbon dioxide. According to the paper, the United States has already overshot its share of the carbon budget by 40 percent. Overall, the Global North has overshot its carbon budget by 92 percent, with the European Union being responsible for 29 percent of that total.

Biden’s new emissions pledge means that “the U.S. will continue to colonize the atmospheric commons, gobbling up the fair shares of poorer nations, causing enormous destruction in the process,” said Hickel. “Why should anyone in the Global South accept this? It is morally and politically untenable.”

Hickel noted that the United States should instead “commit to reach zero emissions by 2030, and to pay reparations for climate damage to countries in the Global South.” Such effort would include helping to facilitate emission reduction efforts in poorer nations that have yet to consume their fair share of the global carbon budget.

The US Climate Fair Share Project, an effort backed by over a hundred seventy-five climate organizations, also believes the United States should do more to combat climate breakdown in developing countries. The project has concluded that in order to cover its fair share of climate impacts, the United States would have to cut its emissions by 195 percent — meaning the country would have to be responsible for negative emissions.

To achieve this goal, the US Climate Fair Share project says the United States would need to cut emissions by 70 percent, then meet the remaining 125 percent reduction by financing international climate efforts and providing technological support to developing countries.

“The U.S., like wealthy countries in general, has a fair share [of emissions reductions] that is too large to be achieved domestically,” noted the project. ”Wealthy countries can do their fair shares by supporting developing countries as they seek levels of ambition greater than they could achieve on their own, levels that are actually commensurate with the 1.5°C temperature goal.”

The 2018 IPCC Special Report elaborated on how temperature rise has already caused “profound alterations” to human and natural systems, leading to extreme weather, droughts, floods, sea level rise, and biodiversity loss, causing unprecedented risks to vulnerable populations. Referring to developing countries, the report noted “the most affected people live in low and middle income countries, some of which have already experienced a decline in food security, linked in turn to rising migration and poverty.”

As of now, the planet is headed toward a 3 degree Celsius increase by the end of the century. About one-fifth of the world’s population already live in regions that have warmed beyond 1.5 degrees Celsius.

“A Worrying Focus on the Private Sector”

A White House press release on the plan said “America’s 2030 target picks up the pace of emissions reductions in the United States, compared to historical levels, while supporting President Biden’s existing goals to create a carbon pollution-free power sector by 2035 and net-zero emissions economy by no later than 2050. There are multiple paths to reach these goals, and the U.S. federal, state, local, and tribal governments have many tools available to work with civil society and the private sector to mobilize investment to meet these goals while supporting a strong economy.”

Net-zero goals have been heavily criticized for distracting from an urgent need to drastically cut down emissions on the assumption that future technologies can sequester the carbon that is emitted today.

As for private sector participation, Harjeet Singh, global climate lead at the international nongovernmental organization ActionAid, pointed out that there is “a worrying focus on the private sector to deliver.”

“How can we have confidence in companies driven by profit margins when we’re not seeing real zero targets from businesses, especially from the polluting industries most responsible for the climate crisis?” Singh asked.

For example, many private US fossil fuel companies have announced dubious net-zero targets while failing to commit to reducing oil and gas output and opposing policies that would help reduce emissions. Between 2000 and 2016, the fossil fuel industry spent over $2 billion in lobbying efforts to kill climate action.

“Fossil fuel groups like the American Petroleum Institute have lobbied U.S. governments under presidents from both parties,” said Raman at the Third World Network. “So Biden has inherited a huge problem, but his [emissions cut] announcement doesn’t do enough.”