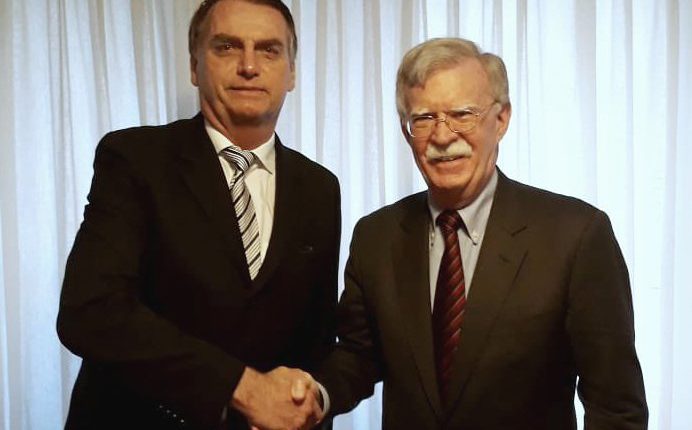 Above Photo: Bolsonaro (left) and Bolton meet in Brazil.

HAVANA – John Bolton, national security adviser to President Donald Trump, made a brief stop on his way to the G-20 Summit in Argentina to meet with the elected president of Brazil, Jair Bolsonaro.

Bolsonaro, accompanied by a retinue of generals, received him with a military salute at the door of his house and told Bolton everything he wanted to hear: the suspension of the summit on climate change scheduled to be held in Brazil next year; the transfer of the Brazilian embassy to Jerusalem; the promise to limit the economic influence of China in his country; and, above all, his willingness to join the war against Venezuela, Cuba and Nicaragua.

Bolton congratulated him for encouraging the withdrawal of Cuban doctors from Brazil and both agreed that the alleged presence of 80,000 Cubans in Venezuela — it is implied that they are military — was an aggravating factor in relations with that country. “Our diplomacy is going to act in Venezuela,” said Bolsonaro, and his team has been working on proposals ranging from internationalizing the judicialization of politics, following the pattern applied in Brazil, to contributing to the Venezuelan economic suffocation.

Satisfied with a meeting that both described as “cordial and productive,” Bolton conveyed an invitation from President Trump to visit Washington, which Bolsonaro received with great pleasure.

Days before, in a meeting in Miami surrounded by the most rancid of the Cuban-American right, Bolton had expounded against the rulers of the new Latin “axis of evil,” describing them as “tyrants”, “clowns” and “fools.”

He also defined the priorities of North American policy towards the region: “In Cuba, Venezuela and Nicaragua, we see the dangers of poisonous ideologies without control, and the dangers of domination and suppression. This afternoon, I am here to convey a clear message from the President of the United States about our policy towards these three regimes. Under this administration, we will no longer appease the dictators and despots near our coasts in this hemisphere. The troika of tyranny in this hemisphere — Cuba, Venezuela and Nicaragua — has finally found its rival.”

In this way, we return to a policy that had its origins in the administrations of Ronald Reagan and George H. W. Bush, centered on the dirty war in Central America, where Cuba was considered the ‘source’ of the North American problems in the region.

Despite the Iran-Contra scandal, where the illegality of this policy came to light, ultraconservatives in the U.S., in alliance with the Cuban-American extreme right, never gave up their objectives. Even old actors are still being recycled, including John Bolton himself.

During the Clinton administration they gathered around the Cuban American National Foundation and counted on the complicity of congressmen like Robert Torricelli, Jesse Helms and Dan Burton, promoters of the laws that still regulate the U.S. blockade against Cuba.

Neoconservatives reached great strength in the design and implementation of U.S. foreign policy during the government of George W. Bush. They were the promoters of the “war against terrorism” and the wars in Afghanistan and Iraq, the latter justified based on lies, that this group knew how to mount perfectly and apply it without remorse. “Cuba after Iraq,” was one of its slogans at that time.

Even during the administration of Barack Obama they remained very active through various organizations and lobbying firms, as well as through their influence in the government bureaucracy and Congress. In the case of Latin America, the office of Congresswoman Ileana Ros-Lehtinen became the unifying center of the Latin American right, displaced from power in many countries by the advancement of progressive governments in the region.

The most important thing then is that when John Bolton speaks of Latin America, we must assume that we are in the presence of a doctrine that for many years has been part of the North American political body. Also that his office is in charge of carrying it out, and for this he has gathered old and new hawks of the cold war, which have taken the White House by assault, so far with the complacency of Donald Trump.

It can not be said, for example, that Cuba’s policy responds only to the opportunist interest of satisfying the demands of certain Cuban-American politicians. It now has become part of the strategy of this government towards the region, thereby limiting any forecast of change, unless it is for the worse.

This strategy is favored by the advance of the right in the subcontinent, especially by the triumphs of characters like Bolsonaro and Iván Duque, in Colombia, whose positions appear definitively subordinated to the United States and coincide, almost exactly, with the ultraconservatives of that country. Bolton himself said that he considers them his main allies in the region.

Now, it would be wrong of us not to dig deep and analyze the real perspective of what is occurring. Beyond the effects of the economic situation, of the manipulations and political repression, even of the mistakes committed by the so-called progressive governments, the advance of the right in Latin America is a reflection of the crisis of governability that can be seen in most of the world.

As could have happened with any previous U.S. administration, it reflects the intention of recovering lost ground in the North American hegemony over Latin America. The difference is that they intend to achieve it by force, against the grain of the globalizing forces that govern capitalism on a global scale and the international order that serves these interests. In this lies its weakness and explains the contradictions of Donald Trump with his own allies and American society in general.

Not able to offer real advantages to the region and face its competitors, as is the case with China, they’ve resorted to the tactic of inventing enemies and waking the most primitive tendencies of the Latin American political spectrum.

This policy has failed many times before. Although the progressive governments have not been able to solve the systemic problems of the region, the right does not propose anything other than to sharpen them, in an environment where the capacity of the United States to support them is more limited than in the past.

‘America First’ is also a problem for the Latin American right. It has its roots in the very contradictions of the political and economic events in the United States, something that no Bolton can change. That’s the reality that must be looked at.