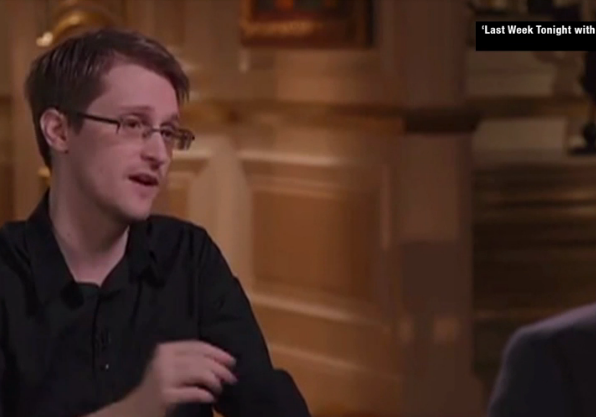 The comedian surprised viewers on Sunday night by revealing that he visited Russia last week and met with Snowden, who leaked a trove of documents about the American government’s mass surveillance programs to journalists in 2013.

The result was a half humorous, half serious R-rated conversation about surveillance, centering around one specific possibility: Can the government secretly access Americans’ naked selfies?

“If you have your email somewhere like Gmail, hosted on a server overseas or transferred overseas or [if it] at anytime crosses outside the borders of the United States, your junk ends up in the database.”

He added, “Even if you send it to somebody within the United States, your wholly domestic communication between you and your wife can go from New York to London and back and get caught up in the database.”

Oliver’s show “Last Week Tonight” has become known for its lengthy examinations of under-covered but critically important topics. The Snowden interview is another example of what some have called “investigative comedy.”

The interview took many months to arrange. Only a handful of American journalists have traveled to Russia to meet Snowden in person. (Snowden has been living there in exile while his lawyers seek a way for him to return to the United States.)

So why did Snowden and his advisers grant Oliver’s long-standing interview request?

“The reason why we chose John Oliver is because of his journalism,” said a source close to Snowden.

That’s right — Oliver may insist he’s just a comedian, but others know his act is sometimes journalistic, even if that’s not his main intent.

When the two men met in Moscow, Snowden spoke frankly about his fears that the initial reports by The Guardian, The Washington Post and other news outlets would not get sustained attention.

“I was initially terrified that this was going to be a three-day story. Everybody was going to forget about it,” he told Oliver. “But when I saw that everybody in the world said, ‘Whoa, this is a problem, we have to do something about this,’ it felt like vindication.”

Oliver challenged him on that. HBO had sent camera crews to Times Square in New York to ask Americans about mass surveillance. The crews came back with tapes of people saying “I have no idea who Edward Snowden is.”

Oliver played the tape for Snowden, who seemed to grimace at one point while watching it.

Oliver asked him, “Is it a conversation that we have the capacity to have? Because it’s so complicated, we don’t fundamentally understand it.”

“It’s a real challenge to figure out — how do we communicate things that require sort of years and years of technical understanding, and compress that into seconds of speech, so I’m sympathetic to the problem,” Snowden said.

That’s when Oliver sought to make it about something very specific: naked selfies.

Oliver showed Snowden more tape from Times Square — this time, with passersby saying things like, “If my husband sent me a picture of his penis, and the government could access it, I would want that program to be shut down.”