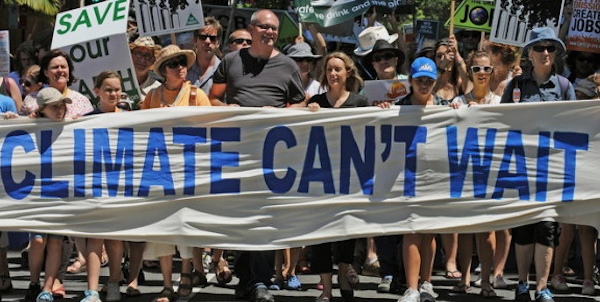 The People’s Climate March, scheduled for Sept. 21 in New York City, is poised to live up to its promise of mobilizing the largest number of people that the U.S. has ever seen against the mass production of greenhouse gases. With more than 1000 endorsing organizations, buses scheduled to leave from more than 200 locations, alongside chartered trains (including three leaving from Connecticut and one from San Francisco), over 200,000 Facebook invites, and countless meetings and events around the country, the march will create major advances for the climate movement.

By marching, participants will affirm for all to see that, at root, climate change is not a matter of isolated individual consumer decisions but of institutional forces that refuse to respond to the will of the majority. They will show that climate activists can go beyond local organizing on dispersed projects and can come together to articulate their vision.

The absence of mass demonstrations for many years kept the movement from forging a visible political expression—until the marches against the Keystone XL pipeline in 2012 and 2013. This had allowed climate change to appear like a fringe issue of the relatively well-to-do, or simply something beyond the scope of human intervention. September will mark an advance from the fringes to the mainstream, and from paralysis to action.

In particular, the participation of more than 30 unions presents a ground-breaking opening for labor and the climate movement. Endorsers include the Communication Workers of America, the Amalgamated Transit Union, 32BJ, the United Federation of Teachers, Transport Workers Union 100, US Labor Against the War, and other formations including machinists, electrical workers, farm workers, and a variety of food and service workers.

The participation of unions is a crucial question, given their members’ social position and ability to shift social production from a greenhouse-dependent one to a renewable, even waste-free, one. Such potential was raised at one presentation for a union meeting organized by the Connecticut Roundtable on Climate and Jobs, where participants showed impatience to go beyond discussing the evidence of climate change to working out the steps needed to end it. “We can build anything; what do you want us to build?” one worker asked.

To be sure, the union movement is still largely divided over climate questions. For instance, Pennsylvania mineworker unions have recently organized against milquetoast attempts to reduce coal-plant emissions, in an attempt to preserve their jobs. This strategy of aligning with the bosses to protect job security will only be successfully challenged as the movement grows powerful enough to realistically demand a secure livelihood and employment for workers affected by the transition to renewables and as the movement becomes capable of struggling independently of the boss class.

A glaring limitation of Sept. 21 is the absence of any united demand whatsoever, or even a rally with speakers. The absence of any specific political message springs from the march organizers’ continued political dependence upon ruling capitalist forces, particularly the Democratic Party.

While 350.org’s Bill McKibben has singled out the fossil fuel industry for demonization, he has treated the rest of big business as generally innocent, and looks to Obama as an ally who needs encouragement and support, rather than chief executive of the capitalist state tasked with maintaining the profitability and power of the fossil fuel industry, the banks, and every other sector tied to the destruction of Earth.

The Sierra Club’s Michael Brune speaks even more highly of Obama and the Democrats. Indeed, their last major march against the Keystone XL pipeline referenced Obama’s campaign slogan with its title, “Forward on Climate.”

The labor unions and other organizations involved are also committed to supporting the Democratic Party, and it is clear that any specific demand that would be acceptable to anyone in the movement would be embarrassing to these “allies” in Washington.

As pointed out by left commentators Chris Hedges and Anne Petermann, the absence of concrete demands has opened the door for even corporate fronts like Climate Group (whose backers include BP and China Mobile) to advertise the demonstration on their website (although this support has not translated into a formal endorsement).

Hedges, however, poses an entirely inadequate solution to this problem. To begin with, he poses no demands either. He simply supports plans for direct action following the main march and quotes Kevin Zeese’s call to disrupt the UN meeting itself.

Zeese characterizes the main march as merely symbolic, but how can a few arrests in central Manhattan be anything more than symbolic? Even the activists who recently stalled a train full of coal and oil in Seattle by blocking the tracks did not slow the emissions of greenhouse gas one iota.

For direct action to have an effect beyond symbolism, it has to appeal to broad layers of society and involve large numbers of people (particularly those working at the point of production) in sustained struggle, whose aim is not the arrest of the participants but actual material victories, up to and including the seizure of mass production by those who make it run.

This will require mass organizations of working and oppressed people and a leading layer capable of directing the struggle independently of the capitalist class. A small number of people getting arrested for a cause with no discernable material effect can symbolize militancy, but it can also symbolize political isolation and desperation, or even the attempt to substitute for the struggle of the many with the actions of a few.

A demonstration of hundreds of thousands symbolizes the will of the majority in society and reveals those in charge of everything to be the utter minority. A demonstration that includes a substantial showing from organized labor symbolizes the potential that working people have to shut down production and reorganize society.

A demonstration that draws in significant layers of new people from many different walks of life symbolizes our collective potential to radically reshape society, and thus the relevance and practicality of an uncompromising and sweeping vision, and the demands to articulate it.

It is not possible to conjure a revolutionary uprising at will. As in Tunisia, Egypt, Wisconsin, and Ferguson, such explosions often take the world by surprise—even when the initial actions have been planned. What can be consciously developed are democratic practices that allow a layer of today’s activists to learn how to advance a struggle independently of the capitalist class and build organizations that can realize their goals. The climate march creates more space for this perspective, not less.

Radicals must use the opportunity posed by the march to connect with the many layers, old and new, who are joining the protest. Where possible, they should advocate large democratic meetings to follow, where the base of the movement can get together to work out demands and a struggle that is independent from big business, its institutions, and its parties. The demands for 100% renewable energy and a just transition for hydrocarbon workers might well become crucial demands in advancing this process.