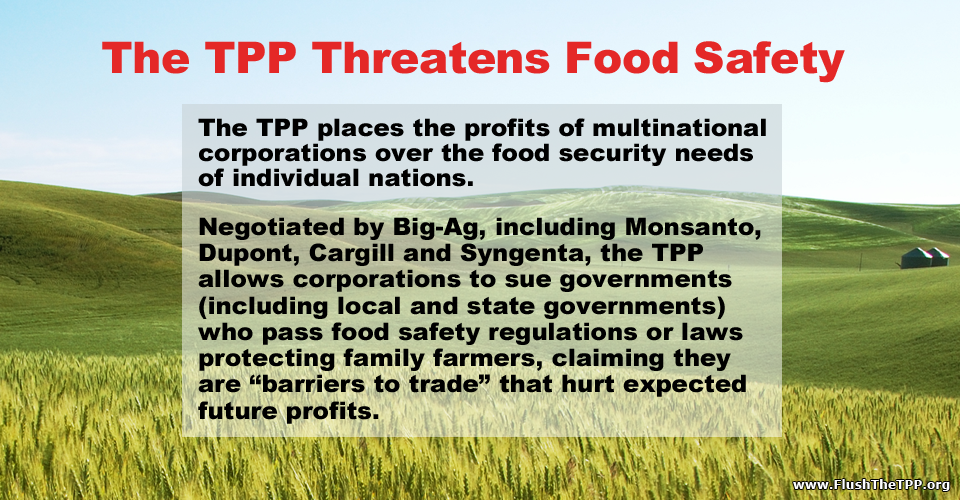 If you want to learn more about the TPP’s effects on food and farming, attend the #TPPTuesday Twitter Party on Tuesday. It’s easy if you have a twitter account, just go to #TPPMediaMarch.

The virtual party will take place Aug. 13 from 9 to 10:30 pm EDT. The experts are Alexis Baden-Mayer from the Organic Consumers Association and Kerstin Lundgren from the Fair World Project. Send your questions to them at #TPPMediaMarch and follow the #TPPMediaMarch hashtag to see their responses.

Share this with your friends and family so that they can participate as well.

Here is an article on the TPP and food by Ronnie Cummins who is not only the president of the Organic Consumers Association but is also the Head of the FDA for the Green Shadow Cabinet: “FDA Warning:” The TPP is a threat to your health and safety.

And here is a video by The Naked Emperor on Monsanto and the TPP.

First TPP Rally on a state capitol steps –Last Saturday, hundreds marched to the Madison Capitol for a “Derail Fast Track and Stop the TPP” Rally during the weekly farmer’s market. Speakers included Debra White Plume of the Oglala Nation, David Newby of WI Fair Trade, Rich Monje of Workers United, Shamako Noble of Hip Hop Congress, Cheri Honkala of the Poor Peoples Economic and Human Rights Campaign, Ruth Caplan of the Alliance for Democracy and Margaret Flowers of FlushtheTPP. We passed out nearly 2,000 TPP OccuCards at the farmer’s market. The TPP will prevent direct selling from farmers to consumers as well as undermining food sovereignty and food safety in other ways.

Things to do today

Letter to President Obama: We urge you to sign the No to Fast Track and Secrecy on the TPP! The petition calls on President Obama to make the process more transparent and not seek Fast Track so Congress can fulfill its responsibility under the Constitution.

After you sign, share it widely so we can continue to build the movement to stop the TPP.

Immigrant rights letter: Here’s a great letter describing how the TPP is fueling militarization of  the border. You can sign on and share with people and organizations who are concerned about the rights of immigrants.  Read the letter and sign here.

Every #TPP Tuesday: There will be a #TPPTuesday twitter party to cover different issues and to answer your questions about the way the TPP will affect issues that you care about. Next Tuesday, Aug. 20, the topic will be health care. Watch for more information on the FlushtheTPP and TPPTuesdaysMarchOnMedia Facebook pages.

Days of Action August 22 to August 30: Solidarity actions to coincide with the last round of negotiations being held in Brunei.  Start planning actions now. Here are some tools to help you plan your action.  You can add your action here so people can learn about it and join you. Remember that this is the time to contact your members of Congress to insist that they do not give up their constitutional right to negotiate and sign trade agreements. In other words, “Say ‘No’ to Fast Track!”

And remember to order or download and print TPP OccuCards – a quick way to provide people with the basics of the TPP and where they can learn more.

Thank you for joining the effort to stop the TPP!
From,
The Flush the TPP Team