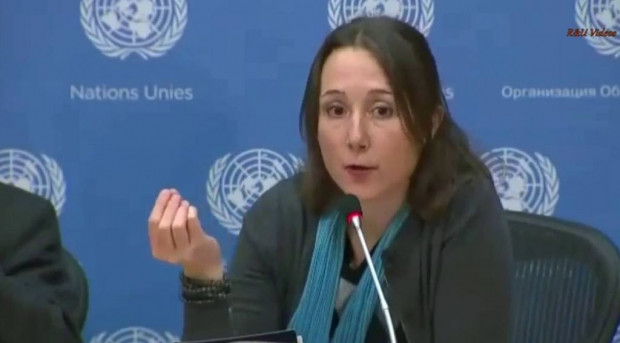 Having spent a number of months on the ground in Syria, traveling all across the country and, specifically, Aleppo, journalist Eva Bartlett has finally returned to the Western world with yet another round of firsthand knowledge of the Syrian Crisis. Bartlett has traveled to Syria a number of times, each time carrying back a story widely different from that peddled on the mainstream corporate press of NATO countries.

Bartlett has been regularly posting articles and videos regarding the truth in Syria on her own personal website, In Gaza, and through publications on other websites like The Duran, Global Research, Mint Press, and through her interviews with channels like RT and other alternative media outlets. I encourage every reader to access and read her article, “Aleppo: How US & Saudi-Backed Rebels Target ‘Every Syrian’: War Diary By Western Journalist Eva Bartlett On The Truth About Aleppo” as well as the other excellent reporting on her website.

After having left Syria, Bartlett took part in a press conference organized by the Syrian mission to the United Nations. After giving a brief statement about what she has observed in Syria and how she is aware firsthand of the Western media’s deception in terms of coverage of the crisis, she was questioned by a Norwegian journalist, Christopher Rothenberg, who challenged her claims that the Western media was lying.

“You talk the corporate media, the Western media, the lies, and all of this. Could you explain what might be the agenda from us in the Western media and why we should lie,” Rothenberg asked. “Why the international organizations on the ground should lie? Why we shouldn’t believe all these absolutely documentable facts that we see from the ground? These hospitals being bombed. These civilians that are talking about the atrocities that they have been experiencing. How can you justify calling all of us liars?”

She begins by admitting that there are “certainly honest journalists among the very compromised establishment media.” Bartlett then addresses Rothenberg’s second question first, by asking him to name one international organization on the ground in Eastern Aleppo. Rothenberg, of course, could not answer the question; so, after a long pause of silence, Bartlett proceeded to point out that there are none. She then dismantled the reliability of the Syrian Observatory for Human Rights (staffed by one man in Coventry, UK on the Internet) and the notorious terrorist support group known as the White Helmets.

These organizations are relying on the Syrian Observatory for Human Rights [SOHR], which is based in Coventry, UK, which is one man. They’re relying on compromised groups like the White Helmets. Let’s talk about the White Helmets: They were founded in 2013 by a British ex-military officer, they have been funded to the tune of $100 million by the US, UK, Europe and other states.

She added, “their video footage actually contains children that have been ‘recycled’ in different reports; so you can find a girl named Aya who turns up in a report in say August, and she turns up in the next month in two different locations.”

“As for…the agenda of some corporate media: it is the agenda of regime change,” she said. “How can the New York Times…[or] Democracy Now…maintain until this day that this is a civil war in Syria? How can they maintain until this day that the protests were unarmed and non-violent until say 2012? That is absolutely not true. How can they maintain that the Syrian government is attacking civilians in Aleppo, when every person that’s coming out of these areas occupied by terrorists is saying the opposite?”Bartlett then addressed Rothenberg’s second question.

Bartlett also fielded questions from another journalist who asked about the differences between Western and Russian/Syrian media reporting of the situation in Aleppo, including the fact that terrorists have repeatedly mined areas once they have retreated as well as the Russian-Syrian cooperative effort to evacuate civilians from “rebel”-held territory.

Sputnik covered the interaction in this way:

“You ask why we aren’t seeing this,” Bartlett chimed in. “This relates to the other gentleman’s question about why most of the corporate media are telling lies about Syria. It’s because this is the agenda; if they had told the truth about Syria from the beginning, we wouldn’t be here now. We wouldn’t have seen so many people killed.”

“In fact,” she noted, “what the Russian media…is [showing] is exactly what the Syrian media is saying, and it shows what independent people in Syria are saying.” With regard to other flaws in mainstream media coverage, including the sensitive topic of alleged Syrian and Russian air force attacks on hospitals, Bartlett offered another example of media manipulation. “They have manufactured stories, and I can give you a precise account,” she said. “In April this year,” there was a story about “a hospital called the Al-Quds Hospital – which in a concerted effort all media said was attacked, targeted and badly damaged by either the Syrians or the Russians. In fact the Russians had satellite imagery showing that this hospital was in the shame shape that it was in in October 2015. No difference; it was not attacked.”

Continuing, Bartlett recalled that “months later, the Guardian, a prominent British newspaper, actually said that the Al-Quds hospital that it had alleged months prior to be attacked and destroyed, was treating victims of so-called chemical weapons attacks. So even the media that is lying is inconsistent in their lies.” In the meantime, she added, unfortunately, Western governments and the media have ignored real attacks on hospitals throughout Syria by anti-government rebels and terrorists.

The entire press conference can be viewed here

Brandon Turbeville – article archive here – is the author of seven books, Codex Alimentarius — The End of Health Freedom, 7 Real Conspiracies, Five Sense Solutions and Dispatches From a Dissident, volume 1 andvolume 2, The Road to Damascus: The Anglo-American Assault on Syria, and The Difference it Makes: 36 Reasons Why Hillary Clinton Should Never Be President. Turbeville has published over 850 articles on a wide variety of subjects including health, economics, government corruption, and civil liberties. Brandon Turbeville’s radio show Truth on The Tracks can be found every Monday night 9 pm EST at UCYTV. His website is BrandonTurbeville.com He is available for radio and TV interviews. Please contact activistpost (at) gmail.com.

This article may be freely shared in part or in full with author attribution and source link.