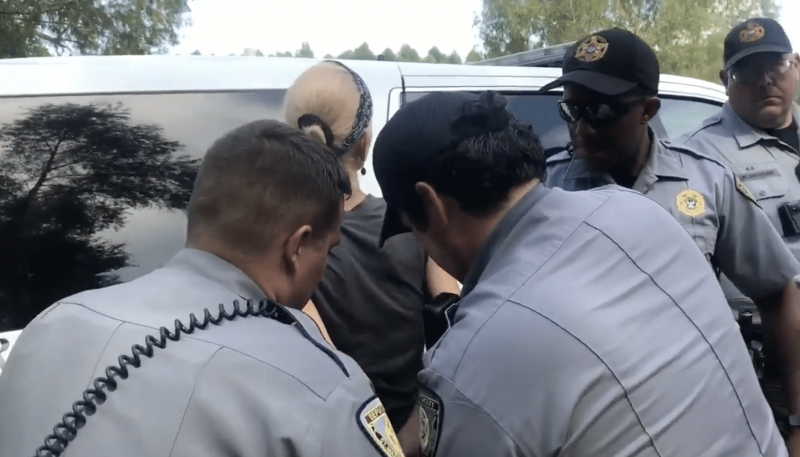 Journalist Targeted For Reporting On Police Working For A Pipeline Company

Above Photo: Journalist Karen Savage is arrested and handcuffed by several sheriff’s deputies at a boat ramp far from the Bayou Bridge pipeline construction easement on September 18, 2018. (Cherri Foytlin)

An investigative journalist shares her perspective after being arrested twice while reporting on resistance to the Bayou Bridge pipeline construction.

For the first time in nearly three years, I woke up a few months ago without felony charges hanging over my head.

I’m an investigative journalist and I’d been arrested twice in 2018, both times for allegedly trespassing on what’s known as “critical infrastructure,” a felony under a then-new Louisiana law that — at the urging of the oil and gas industry — redefined pipelines and their construction sites as critical infrastructure. (In the U.S., that term historically referred to systems necessary for society to function, such as power plants and communication lines.)

In Louisiana, prosecutors have four years to decide whether they will press charges. Finally, after what seemed like an eternity, a Louisiana district attorney confirmed in July that he will not prosecute me or the nearly two dozen pipeline opponents, known as “water protectors,” who were also arrested.

To be clear, it could have been worse. As a straight, older, white woman, I’m far less likely to be targeted at the various stages of the “justice” system than my colleagues and friends who are LGBTQ and Black, Indigenous, and People of Color (BIPOC).

Along with two water protectors, I filed a lawsuit shortly after my arrest, questioning the constitutionality of Louisiana’s law. The prosecutor wasn’t likely to press charges against any of us until that legal challenge was resolved — or at least that’s what I tried to convince myself whenever I slid from my usual optimism into full-blown panic over the combined 10 years in prison, with hard labor, and hefty fines I was facing if convicted.

As it turns out, the district attorney announced he was rejecting all charges shortly after a federal court denied his motion to dismiss our suit in May.

Even if he’d pursued them, there’s no way the prosecutor could have won. I had written permission from landowners to be on their property, which lies deep in the Atchafalaya Basin,  and to report on resistance to construction of Energy Transfer’s Bayou Bridge pipeline. Water protectors had permission to be there too. In fact, it was the landowners who had requested their help after all other efforts to stop construction of the pipeline through their property, which is accessible only by boat, had failed.

The 163-mile pipeline project to carry North Dakota oil through southern Louisiana, had drawn fierce opposition from the moment it was proposed. There were contentious public hearings, passionate rallies, marches and calls for state legislators to put a stop to the project — all covered  for DeSmog by Julie Dermansky, whose photos captured the passionate events and raw emotions. But in Louisiana, the fossil fuel industry has a history of getting its way.

Work on the pipeline began in January of 2018, and during that summer, as construction moved into the Atchafalaya Basin, so did the resistance. The Basin is the largest river swamp in North America, teeming with birds, fish, and wildlife.

I’d reported on almost all of the pipeline resistance, from banner drops to non-violent actions, where seemingly fearless water protectors put their bodies on the line to stop construction. Most of the time, especially in the swamp, I was the only reporter or photographer on the scene. I felt lucky to be able to report on such an important story from such an amazingly beautiful place (and still do).

While I made sure I had the landowners’ permission to be on the property where I was arrested, Energy Transfer did not.

But for Energy Transfer, the consequences for knowingly breaking the law were minuscule compared to the money that could be made by completing the project. So construction continued.

Months later — long after the pipeline was finished — a Louisiana judge would rule that Energy Transfer was indeed trespassing on a privately owned section of land in the basin. He ordered the company to pay the three landowners a whopping $75 each. Last year, an appellate court judge later bumped that up to $10,000 each, along with attorneys’ fees, writing that Energy Transfer had not only “trampled” the landowners’ rights, but “eviscerated the constitutional protections laid out to specifically protect those property rights.”

My next story on the #BayouBridge pipeline will be out soon – here’s what it looked like out there a few days ago.#ETP does not have legal permission to cut trees, dig a trench or run pipeline through this piece of land. #SwampReporting#louisiana#AtchafalayaBasin pic.twitter.com/ZnSlFKEcBR

Yet back on that sultry August day in 2018, none of that mattered.

Nor did it matter that on that day none of us were arrested on the purported pipeline easement, the only part of the property that could — albeit with a stretch of the legal imagination — be considered “critical infrastructure” and therefore subject to the Louisiana law. Deputies from St. Martin Parish Sheriff’s Office, who were being paid to moonlight for the pipeline company at the time, arrested me anyway, along with three water protectors.

If not for the district attorney’s decision not to prosecute me or any of the water protectors who would be arrested in the months that followed, it might have been a slam dunk for the fossil fuel industry.

Inspired by model legislation created by the corporate-friendly American Legislative Exchange Council (ALEC), the oil and gas industry wrote — and then lobbied state legislators in Louisiana and other states to pass — the felony trespass bill that eventually became law.

Through a security contractor, the pipeline company paid local sheriff’s deputies to serve as its private mercenaries. Taking direction from pipeline construction workers, the deputies tackled, choked, pepper-sprayed, tased, and arrested water protectors, all under the pretext of enforcing the new felony law.

Designed To Chill Protest — And Reporting

When the law was passed in 2018, Louisiana — like most states — already had trespassing laws. By raising those existing laws from misdemeanors to felonies with harsh penalties, Louisiana and dozens of states are censoring protestors’ ability to exercise their First Amendment rights.

They’re also preventing journalists from reporting on those protests without fear of retribution.

In my mind, it’s no coincidence that my first arrest, in August, came the day after I’d interviewed with a state official, who I’d caught in a blatant lie.

My second arrest, exactly one month later, was at a boat ramp miles from the nearest pipeline construction site. In fact, Louisiana’s law is so vague that most of the people who have been arrested for felony trespassing weren’t on an easement at the time of the arrest.

Initially, the boat ramp arrest seemed completely random, until from the back of the police car I heard deputies over the radio discussing plans to arrest dozens of water protectors. Again, at a boat ramp miles from the nearest construction site.

By then I’d already published a story and video showing law enforcement violently arresting water protectors in kayaks while working for the pipeline company. I would have similarly documented whatever the sheriff’s deputies and Energy Transfer  had planned that day — had I not been handcuffed in the back of a deputy’s squad car. I don’t know why the arrests deputies were planning that day never happened. I can only speculate that the presence of another photographer there that day may have played a role.

I do know the felony charges against me — and fear of what would happen if I was arrested while on bail for two felonies — prevented me from covering some of the most important events of the past three years, including protests after the police murder of George Floyd. Election night I stayed home. I watched the January 6 insurrection on TV.

I wasn’t arrested because I was trespassing, but because of my willingness to report fairly and truthfully on a fact — that pipeline construction harms the environment and exacerbates climate change — that oil companies, their trade groups, and fossil fuel–funded legislators in Louisiana, one of the most oil and gas-friendly states in the nation, don’t like.

And when reporters are no longer allowed to report the truth, we all lose.