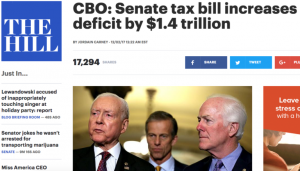 Now that the Republicans’ brazen tax bill that the CBO predicts will add $1.4 trillion to the deficit has passed, yet again exposing “deficit concerns” by congressional Republicans as an empty marketing ploy, will those in the media who pushed the Deficit Doom narrative during the early Obama years admit they were wrong?

Suddenly deficits—something Every Serious Person cared about—are a total nonissue. The Beltway orthodoxy for decades—especially in the years following the 2008 economic crash—that deficits would crush our economy and render the United States insolvent is mysteriously absent from the Republicans’ plan to increase the deficit by equivalent of the GDP of Russia.  (To say nothing of September’s budget-busting Defense bill—FAIR.org, 9/21/17.)

It should be noted this isn’t the first time the media has gotten collective amnesia when it comes to Republicans’ “fiscal hawkery.” The Bush years increased the deficit $1.4 trillion by cutting taxes, funding a bloated military expansion driven by wars of choice and setting up the cynical election-year giveaway Medicare Part D. All of this was washed away when the Tea Party “insurgency” came to power in 2010—a Koch-funded rebranding effort the media also credulously pushed.

Of the 30 congressmembers who formed the initial “fiscal responsibility”–driven Tea Party caucus in 2010, every one who was still in Congress in 2017 voted in support of Trump’s deficit-bloating tax cut bill. 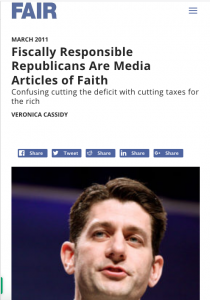 “Republican policies past and present that have played starring roles in generating federal red ink got a free pass,” Extra! (3/11) noted in 2011.

It’s not as if this weren’t predictable. Groups like FAIR (3/15/11, 8/14/12) and economists like Paul Krugman (New York Times, 4/6/11) and Dean Baker (Truthout, 8/13/12), among others, time and again during the early Obama years insisted the Republicans’ “deficit hawk” posture was little more than a marketing gimmick to justify cutting programs for the poor and transferring money to the wealthy. And now that these same “deficit hawks” have a Republican president and control over both houses of Congress, their concern with “balancing the budgets” vanishes into thin air. Because the concern never existed; it was one part racist dog whistle, one part transparent moral framework for greed.

Shouldn’t the many journalists who served as message-carriers for Republicans’ claims that the deficit was an urgent issue that they cared about in earnest apologize for being taken in? And wouldn’t a healthy media examine how much they helped push this line without question now that we know how bogus it was to begin with?