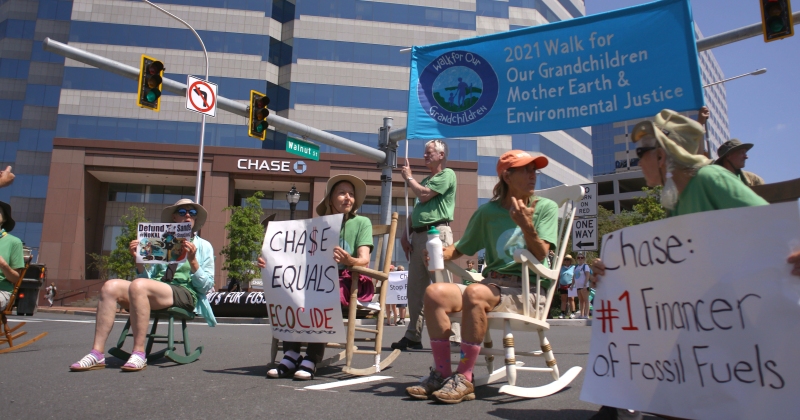 Above photo: Beyond Extreme Energy.

In a trial that took place on the last scheduled day of the COP 26 global climate summit in Glasgow, Scotland, Judge Kerry Taylor allowed the 11 pro se defendants who last June sat in rocking chairs in the main thoroughfare in front of JP Morgan Chase Bank’s credit card headquarters in Wilmington, Delaware, to submit testimony about the climate crisis and the role of banks in funding it.

Defendants pursued a “choice of evils” strategy, which under Delaware law allows someone to break the law to prevent a greater “imminent” harm.  The prosecutor, who was the arresting officer, kept asking defendants who took the witness stand how their blocking the road prevented “imminent” harm that would justify the inconvenience to motorists who were delayed for a short time. Defendants testified to the drastic “imminent” harms already occurring due to climate change, like the fact that on the day of the protest, temperatures reached 108 degrees in the Northwest, part of a several-day heat wave that killed 100 humans and a billion sea creatures.

Defendants submitted copies of the 50-page Summary of the IPCC Sixth Assessment Report, published in August, which confirms that it is indisputable that human influence has caused all the warming in the climate system that has occurred since pre-industrial times. They also submitted copies of the 2021 Banking on Climate Chaos, which shows that JP Morgan Chase is by far the biggest funder of fossil fuel projects around the world. Finally, they submitted a document in which the International Energy Agency declared that in order to avoid climate tipping points, funding for and construction of any new fossil fuel projects must cease this year.

Defendant Melinda Tuhus said, “Getting this documentation into the record was historic, as judges almost never allow a choice of evils defense – also known as a necessity defense. However, although the judge allowed defendants to testify on these matters, in the end she chose the narrow definition of ‘imminent harm’ and found us guilty of disorderly conduct and imposed fines and court costs of $97 on each of us.”

Defendant Steve Norris, a great-grandfather and one of the main organizers of the action, said, “Judge Kerry Taylor today at the last-minute stole defeat from the jaws of victory. She admitted into evidence the IPCC Report, Banking on Climate Chaos and the IEA Report. But then judge Taylor turned her back on us and seemed to claim that the drivers we inconvenienced in front of Chase Bank suffered greater harm than the millions of people who are suffering from climate change.”

Tony Ingraffea, professor emeritus of engineering at Cornell University and an expert on methane, the second most common greenhouse gas after CO2, testified in late September at a People’s Climate Tribunal outside the Wilmington courthouse. After the verdict on Friday he said, “Once again the judicial system, although capable in this case of expressing ‘sympathy’ for the defendants’ cause, is incapable of the righteousness needed in our collective climate emergency. The earth needs no sympathy. It deserves our apology and the righteous course of action that the defendants pursued in this case.”

Karen Igou, the youngest defendant at 51, wrote after the trial, “Today we could have made history. Today I watched 11 dear elders pour their hearts out after weeks of planning, researching, organizing. Today I listened to hours of testimony about the crimes against humanity committed by Chase Bank and the prognosis of our ailing planet and its most vulnerable inhabitants. Today I sang, held hands, wept, ate, prayed, and testified with elders who are wise beyond my years, have full and vibrant lives, yet still put them all on hold to try to protect our Earth. Today I witnessed police officers who in court seemed determined to undermine the efforts of those trying to save life on Earth, but who in the hallways whispered that we had their support. Today I watched a woman, a judge, meet eyes with comrades imploring that she get on board with those ready to cast aside convention and joyously protect and embrace life on Earth. I also watched that judge fall in line with the status quo and through a lack of creativity and courage, a desire to go by the book rather than write a new one, let herself disappear into nothingness rather than make history. But in the end the problem isn’t how the evidence was presented or if the wording was correct. It is the human condition of cognitive dissonance and the steadfast desire to continue on with life as we know it rather than life as it could be.”