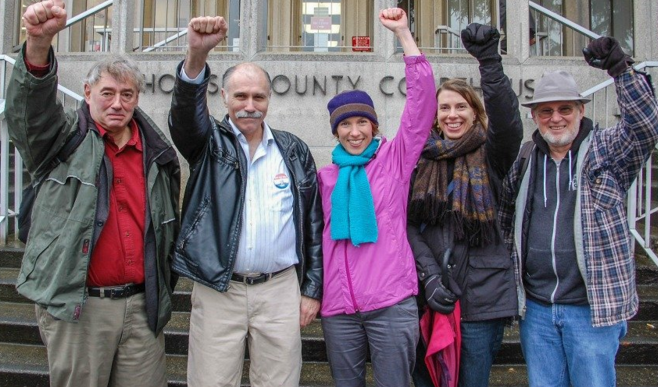 Note: In a case where US defendants have gone further in presenting the necessity defense, presenting the evidence before the judge refused the jurors to consider it, the defendants were found guilty of trespass but not guilty of obstruction. They will not face any jail time nor will be they be subjected to  financial harm to Burlington Northern Santa Fe whose oil train they blocked in 2014.

Mixed verdict for #Delta5 #climate activists who blocked #oiltrain. They consider it a win. https://t.co/goQ2qicGGK pic.twitter.com/l5Z5Laqr9E

The Seattle Weekly reported that the Delta 5 are pleased with how the trial played out. “On behalf of the Delta 5,” defendant Abby Brockway told Judge Howard, “we were honored to have our four days in court.” Activist Tim DeChristopher, who is a founder of the Climate Disobedience Center, which is spearheading necessity defenses around climate change, reported the jurors thanked the activists:

The jurors and blockaders hugged:

#delta5 have moving talk with jurors after the verdict. ‘Welcome to the movement’ says Mike LaPointe pic.twitter.com/vKwXTdDHIq

Five environmental activists who failed to convince a court that their attempt to block crude oil trains near Seattle was a legally justifiable act of civil disobedience on Friday were nonetheless praised by a judge as “part of the solution” to climate change.

On Friday, the campaigners were convicted in a court in suburban Seattle of misdemeanor trespassing relating to a September 2014 protest in which they blocked railway tracks used by crude oil trains in Everett, Washington.

They were acquitted of a second count of misdemeanor obstructing a train.

The so-called “Delta 5” – Michael LaPointe, Patrick Mazza, Jackie Minchew, Elizabeth Spoerri and Abigail Brockway – had hoped that their trial would mark the first time that a US jury was allowed to consider the “necessity defense” in a case of climate activism.

The defendants intended to argue that their acts, though illegal, were necessary to prevent the greater harm of catastrophic climate change.

But after allowing two days of expert testimony on topics ranging from the Paris climate talks to railway safety standards and the health impacts of particulate matter, Judge Anthony E Howard ruled that the defense had failed to present sufficient evidence to show that the defendants had “no reasonable legal alternative” to trespassing on a private rail yard and blocking trains.

The case is a blow to environmental campaigners but marks the furthest defendants have managed to go in an American courtroom using the so-called “necessity” defense that argues such actions are justified to combat catastrophic climate change.

The activists progressed unusually far because Howard allowed them to call expert witnesses to testify to the harms of climate change, even though he later felt compelled to instruct the jury to disregard their evidence. The judge appeared to do so reluctantly, expressing some sympathy for the activists in a court on Thursday.

“Frankly the court is convinced that the defendants are far from the problem and are part of the solution to the problem of climate change,” Howard said from the bench. But, he added: “I am bound by legal precedent, no matter what my personal beliefs might be.”

That precedent, including a per se ban on necessity defenses in cases of indirect civil disobedience by the ninth circuit court of appeals, is overwhelmingly against the idea that such an argument should be available to defendants. After his ruling, the judge directed the jury to disregard the expert testimony on climate change, public health, and the dangers of transporting crude oil by train.

In an act of judicial consolation, Howard added that he hoped the defendants, whom he described as “tireless advocates of the kind that we need more of in this society”, would find “some value in having been able to present their beliefs in a public forum”. He also allowed an extra 10 minutes for lunch on Thursday, in recognition of the fact that he had “just crushed your hopes and dreams”.

Though the necessity defense dominated the proceedings in the courtroom, it is something of a legal oddity that MJ McCallum, Bridge Joyce and Evelyn Chuang – three of the four lawyers on the defense team – recalled learning about in law school through a case of sailors lost at sea who resorted to cannibalism when one of their fellow castaways died of natural causes. (The defendants in Regina v Dudley and Stephens were found guilty when they admitted that they actually murdered the child they ate, but trust a defense team to put a different spin on it.)

Robert Goldsmith was the sole attorney on the defense team to have argued for necessity, which he did successfully, once, in the 1979 case of 20 protesters who blocked the entrance to the Zion nuclear power plant in Waukegan, Illinois.

Despite the odds, however, the necessity defense remains the holy grail for some climate activists.

“We’re going to keep working with folks to keep pushing these defenses,” said Tim DeChristopher, a climate activist who served 21 months behind bars for a civil disobedience action after a judge refused his attempt to employ the necessity defense.

DeChristopher’s organization, Climate Disobedience Center, is supporting the efforts of another group that was arrested attempting to block a fracked natural gas pipeline in Westchester County, New York. According to DeChristopher, the protesters will try the necessity defense during a bench trial today, 15 January, in New York.

The defense has been used successfully in the UK, where a jury acquitted six Greenpeace protesters in 2008 after they argued their occupation and damage to a Kingsnorth coal-fired power station in Kent was justified by the threat of climate change.

Beyond the necessity defense, some climate activists are looking at other strategies in the US to challenge the limitations of statutory law and push for urgent governmental action to limit climate change.

“Our legal principles have to account for the clear, imminent danger perpetrated by the fossil fuel industry,” said Mary Wood, a professor of environmental law at the University of Oregon.

Wood is an advocate for applying “public trust doctrine” to climate change, arguing that a government has a fundamental responsibility to preserve crucial resources like the land, water, and air that “predates statutory law”.

Michael Foster, who attended the Delta Five trial each day, works with Seattle youth who adopted Wood’s theory and sued the Washington state government for failing to adequately protect the environment for their generation.

“The system is broken enough that we have to pursue every other avenue,” Foster said.

In December, a judge issued a ruling in the case, which Foster described as “kickass poetry about the constitutional rights of these kids to air, land, and water”.

Though the loss of the necessity defense in this case was a disappointment, DeChristopher remains hopeful that the law will be pushed to take a different view of climate change civil disobedience.