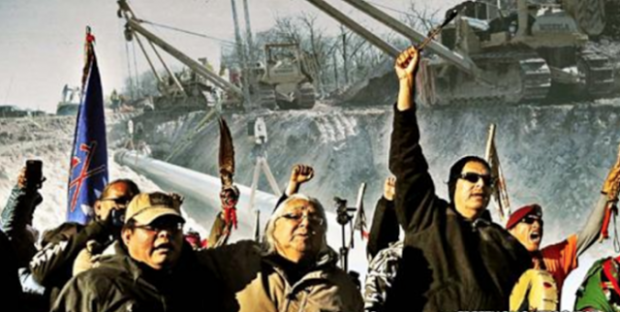 In a decisive victory for Native American rights, a federal judge just ordered an energy company to completely remove a natural gas pipeline.

Seventeen years after the expiration of an easement, a federal judge has ordered an energy company to completely remove its pipeline from the properties of 38 Native American landowners — none of whom have been compensated for the company’s use of their land since the year 2000.

Now, the pipeline company will have just six months to dismantle and completely remove the structure.

“Having carefully reviewed the parties’ submissions, and in light of the facts and circumstances in this case,” Judge Vicki Miles-LaGrange wrote in the 10-page decision for the U.S. District Court for the Western District of Oklahoma, “the court finds that a permanent injunction should be entered in this case. Specifically, it is plaintiffs’ interests in the exclusive possession of their land which has been invaded by the presence of the pipeline and defendants’ continued use of the pipeline.

“Further, Defendants have continued to use the pipeline and although they were advised by the [Bureau of Indian Affairs] on March 23, 2010, more than five and a half years before the instant action was filed, that ‘[i]f valid approval of a right of way for this tract is not timely secured, Enogex should be directed to move the pipeline off the subject property’ …”

Since the granting of the original 20-year easement to Producer’s Gas Company back in 1980, many of the landowners, who are primarily citizens of the Kiowa, Comanche, and Apache Tribes, chose not to renew permission for Enable Midstream Partners, Enogex’ successor, to encroach on their private property — but the company opportuned the fact the ambivalence hasn’t been unanimous.

Court documents disclose the original parties to the easement were each paid $1,925 in compensation for the natural gas pipeline to traverse the 137-acres of land, individually, a 0.73-acre segment of their property.

But the tense relationship only unraveled from there, as Indianz.com reports, “After the easement expired in 2000, they were offered $3,080 for another 20-year lease, according to the documents. But a majority of the allotment’s owners never agreed to the proposed amount, which they contend was far below market value.

“Despite the lack of consent, a firm named Enogex continued to operate the pipeline, which is part of a larger network of gas transmission lines in Oklahoma. The trespass continued even after the Bureau of Indian Affairs in 2010 told the company to reach an agreement or stop using the land.”

Despite that assertive demand, the BIA proceeded to accept $1,098.35 in payment for the easement from 2000 until 2002. Worse, Indianz.com notes, the BIA continued to accept payments from Enogex through 2006 — but didn’t bother consulting landowners about the arrangement.

Worse, at one point — and in diametric opposition to its original posturing — the BIA essentially wrested the decision from the very people whose land would be impacted by the continued presence of the pipeline.

“Despite the rejection by a majority of landowners,” the ruling states, “on June 23, 2008, the Interim Superintendent of the BIA’s Anadarko Agency approved Enogex’s application for the renewal of the right-of-way easement for twenty years.”

A complaint filed by the Indigenous landowners ultimately reversed that approval, with the BIA determining “it did not have authority to approve the right-of-way” without the interested parties’ consent — thus, on March 23, 2010, BIA gave the company notice that, if an agreement satisfactory to all involved parties could not be reached in a timely fashion, the pipeline would need to be moved.

Because a compromise never came to fruition, the court held the pipeline operator has been trespassing on private land since that date — specifically striking down arguments from the defense the Oklahoma statute of limitations for trespass had long passed, and that the consent of just five property owners somehow nullified any claims of trespass.

For a federal judge to rule the energy company must remove an operational pipeline from the property of Native American landowners is an acute contrast to the eventual approval by officials for completion of the Dakota Access Pipeline — despite a monumental, months-long upswell of hundreds of thousands standing in opposition.

With a mere six-month window to disassemble and evacuate the pipeline, the federal court is forcing Enable Midstream Partners to tuck tail and rein in its arrogant exploitation of Indigenous Peoples — at least, for now, in this specific case.