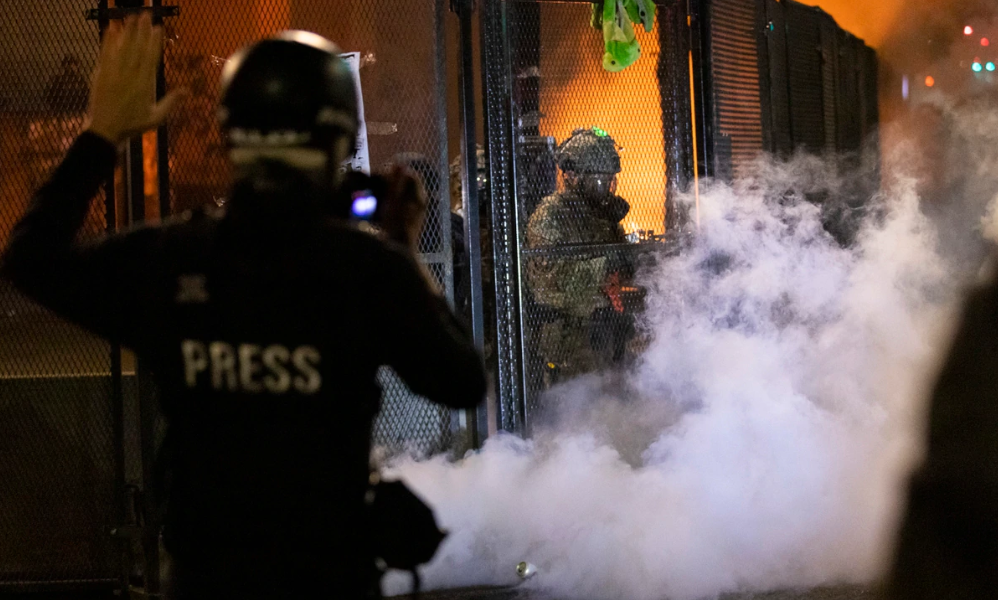 He said Ellen Rosenblum had failed to provide sufficient evidence that such arrests were occurring widely in the streets of Portland or were part of a federal policy.

A federal judge on Friday afternoon denied a request by Oregon Attorney General Ellen Rosenblum to issue a temporary restraining order against federal officers making arrests of Portland protesters without probable cause.

In his ruling, U.S. District Judge Michael W. Mosman said Rosenblum had failed to provide sufficient evidence that such arrests were occurring widely in the streets of Portland or were part of a federal policy. (Disclosure: Rosenblum is married to the co-owner of WW‘s parent company.)

He ruled that because the state of Oregon couldn’t establish a pattern or policy, it lacked the legal standing to seek to halt future incidents.

The judge’s ruling is a painful setback for Oregon officials and demonstrators who hoped to rebuke President Donald Trump and rein in the actions of the federal police he deployed to quash six weeks of uprising and upheaval. It marked a swift end to an ambitious legal strategy that as recently as this afternoon was endorsed by Portland City Hall, which asked to provide expert testimony.

Mosman said the arrest of Mark Pettibone, a Portland demonstrator whisked away in an unmarked van by officers who didn’t identify themselves, appeared unconstitutional. But he said Rosenblum and her legal team had produced little evidence beyond media reports of two arrests, and thus had shaky legal footing to seek to halt future actions by federal police.

“The state has alleged that the purportedly illegal seizures by defendants have caused an injury to its citizens’ rights to speech and assembly,” Mosman wrote. “In other words, the state must show that the illegal seizures […] will occur again in the future. The state could try to show, for example, that all of defendants’ seizures are illegal, or that they are under orders to fail to identify themselves or to make random arrests without probable cause.

Rosenblum issued a statement expressing disappointment in the ruling.

“While I respect Judge Mosman,” she wrote, “I would ask this question: If the state of Oregon does not have standing to prevent this unconstitutional conduct by unidentified federal agents running roughshod over her citizens, who does? Individuals mistreated by these federal agents can sue for damages, but they can’t get a judge to restrain this unlawful conduct more generally. Today’s ruling suggests that there may be no recourse on behalf of our state, and if so that is extremely troubling.”

Mosman’s ruling emphasized that Rosenblum had set a high degree of difficulty for herself by bringing an unusual request to his bench. He said victims of illegal treatment by police typically seek redress for themselves. But in this case, the state sought to ban future, hypothetical actions by police—many of which he noted were already illegal and did not need him to outlaw them.

That left the state with a higher evidentiary burden: proving that the violations were taking place on a large scale, and that a restraining order was needed to protect its citizens from future danger.

Mosman wasn’t persuaded that danger was real. He tore apart the state’s argument that Portland protesters would reasonably fear they were being kidnapped by far-right paramilitary groups.

“The state’s reasoning is that counterprotesters, once they learn of seizures of protesters by federal agents, will dress up like police and go out on private missions to kidnap protesters,” he wrote. “This despite the fact that such kidnappings are Measure 11 felonies in Oregon, punishable by mandatory minimum sentences of up to 70 to 90 years in prison.”

Mosman repeatedly noted that his ruling was narrow in scope, despite the extraordinary nature of the allegations against federal agents.

He said, for example, that he couldn’t rule on the legality of detaining protesters in unmarked vans, because it wasn’t part of the evidence state attorneys provided. Instead, they limited their case to the failure of federal agents to identify themselves as police, or show probable cause for their arrests.

Mosman said that appeared to be exactly what happened to Pettibone—and noted that federal lawyers hadn’t argued the arrest was constitutional. But he noted the only other evidence was a viral video in which it wasn’t clear who was being arrested.