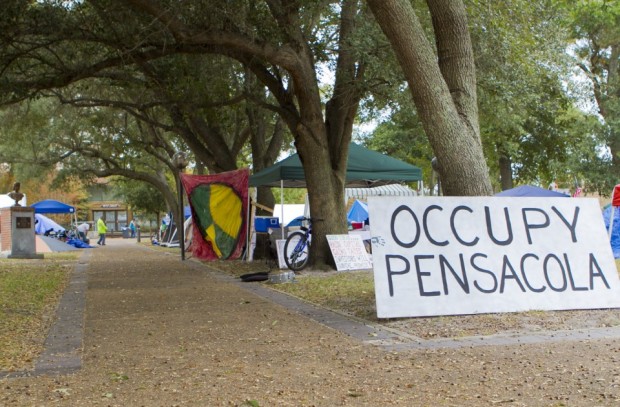 Note: Free Speech rights in the United States are applied in a narrow fashion. If there is ‘significant government interest’, free speech rights can be curtailed. The definition of ‘significant government interest’ is vague. The International Covenant on Civil and Political Rights has a broader definition of free speech, as clarified in General Comment 34. It was ratified by the US Senate but, to our knowledge, has not been applied in the US.

Florida – After more than three years of litigation in the Occupy Pensacola v. City of Pensacola case, a federal judge has decided the case in favor of the city.

Senior U.S. District Judge Roger Vinson granted the city’s motion for summary judgment on Friday, ruling that the city’s action to limit the time and location of Occupy protests had not violated the protesters’ constitutional rights.

“I appreciate Judge Vinson’s ruling, and I’m relieved to bring this litigation to a close,” said Mayor Ashton Hayward in a news release. “While we have the utmost respect for our constitutional freedoms, the city has an obligation to safeguard public health and safety.”

The litigation arose out of local protests, modeled after the “Occupy Wall Street” movement, which began in October 2011.

As the protest swelled to more than 60 tents and approximately 200 people, serious health and safety issues began to emerge.

After Occupy Pensacola participants refused to obtain the proper permits, city officials ordered demonstrators to remove their tents and to comply with park regulations.

In November 2012, Vinson found that the city could lawfully ban the tents and granted summary judgment for the city. The plaintiffs appealed to the 11th Circuit Court of Appeals in Atlanta, which affirmed Vinson’s ruling on the tents, but remanded the case for further consideration of the other claims.

— A declaration that the Special Event permit scheme was unconstitutional on its face and as applied.

— Challenging the constitutionality of the “Parade Ordinance”, which requires a permit for a parade or march, and they sought a declaration that they can march without a permit, and  an injunction to prevent the City from applying the Parade Ordinance to their protest.

Vinson writes that the time and location restrictions the city placed on the Occupy protestors did not unduly restrict their ability to protest publicly through other means and venues.

“I find that the City’s decision to restrict the occupy protest in the manner that it did was narrowly tailored to serve a significant government interest in keeping the North Lawn and the surrounding areas clean, safe, and accessible to the public,” Vinson wrote.

Vinson’s order, linked here, also finds that the plaintiffs lack standing on other counts in the case. Vinson noted that the protestors have continued to protest in other venues and around other causes in the time since the suit was originally filed.

In July, Vinson writes that he directed the parties to address whether this litigation continued to present a live case or controversy.

“I stated that it did not ‘appear’ there was much remaining of Occupy Pensacola — at least not the original group of protesters — since they were no longer keeping a 24-hour presence at City Hall, even though they could do so. Plaintiff Michael Kimberl testified at deposition, for example, that he could still protest at City Hall to this day, but he ‘basically quit participating’ in Occupy Pensacola after the tents were removed years ago and that ‘no one [is] out there’ anymore,” Vinson wrote.

Nor is there proof, Vinson writes, that the city ever applied the parade ordinance to the protestors, as plaintiffs contended.

“As there is no allegation anywhere in the complaint, nor does there appear to be any evidence in the record, that the City had ever applied (or threatened to apply) the Parade Ordinance to the plaintiffs even as they took part in several marches through the streets of Pensacola, the plaintiffs have no standing to press Count V,” he wrote.

Alistair McKenzie, lawyer for the plaintiffs, wrote via email that his clients disagree with Judge Vinson’s rulings, and are “examining the issues and whether or not to appeal this matter.”