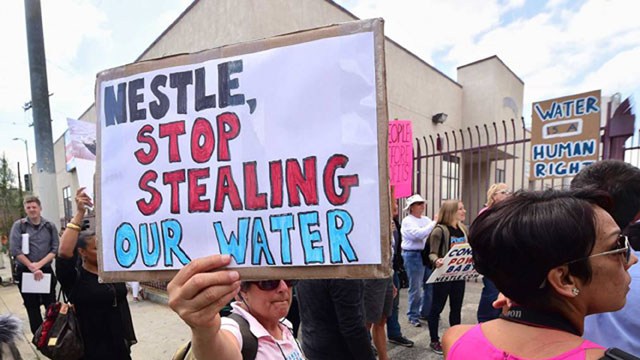 Judge’s Ruling Deprives Community Of Their Voice In Water Decisions

Michigan Citizens for Water Conservation (MCWC) has filed a Petition for Judicial Review of the Final Decision and Order issued by the Michigan Department of Environment, Great Lakes, and Energy (EGLE) and its Director Liesl Clark in which the Department illegally dismissed a Contested Case challenging the highly controversial permit granted to Nestle Waters North America in 2018. The petition for review was filed in the Circuit Court for Ingham County, and in it, MCWC requests that the Court reverse Director Clark’s inaccurate determination that her Department didn’t actually have legal authority to hold a contested case related to the Nestle permit.

The controversial permit would allow Nestle to withdraw up to 400 gallons per minute (210 million gallons per year) of groundwater from an aquifer feeding the headwaters of two cold water creeks in Osceola County which feed the Muskegon River. MCWC challenged the validity of that permit, due to the failures of the company and the Department in authorizing the permit without sufficiently evaluating the impact that withdrawing such a massive volume of groundwater would have on surrounding creeks, streams, wetlands, local drinking water wells, and the people and wildlife that depend on them.

This new petition seeks to compel the Department to comply with the Safe Drinking Water Act, the Natural Resources and Environmental Protection Act, and Michigan’s long-standing principles of water law as decided by Courts throughout the state’s history “in order to reverse the unlawful, unwarranted, and unnecessary dismissal of our Contested case proceeding.”

It appears that the Director and the Department issued the Final Decision and Order dismissing the case in order to avoid reaching a difficult decision on the merits of MCWC’s arguments against the permit. Instead of properly reviewing the substantive failures of the Department as state law requires and as the Director was expected to do, the Department chose instead to change its interpretation of the law following roughly two-years of extensive litigation. The Department’s decision and ruling that Michigan law does not provide for jurisdiction to hold such a contested case is clearly contrary to the plain language of the water withdrawal legislation enacted from 2006-08.

In fact, the issue of jurisdiction had already been decided by the Administrative Law Judge assigned to the case after the parties had fully briefed the issue early on in the contested case proceedings. In addition, the Department’s decision and order runs counter to published materials the Department itself had distributed as part of the public comment period in which 80,000 comments were submitted by citizens throughout the state, the overwhelming majority of which opposed the permit. Following two years of litigation and a four-day trial last May, the Administrative Law Judge issued a Proposal for Decision in the contested case upholding the Department’s decision to issue the permit in Nestle’s favor. MCWC appealed that ruling by filing exceptions to the Proposal for Decision, and that appeal requires the Director of EGLE to review the decision and issue her own ruling. In this case, it was only after sitting on the exceptions for several months and after MCWC and the other parties had spent significant time, effort, and expense to try the case that the Department decided to upend the entire process and declare, via Director Clark’s Final Decision and Order, that they decided to interpret the applicable statutes to find that they actually had no jurisdiction to hear the case, thereby dismissing the case entirely without addressing the numerous failures in the permit process identified and proved by MCWC in the contested case proceedings.

This was a punitive, illegal, and totally unjust outcome against the citizens of this state. In this ruling, EGLE has denied citizens the right to participate in decisions on water withdrawals, setting a potentially dangerous precedent for the future if allowed to stand.

MCWC has no choice but to challenge this outrageous ruling by filing the petition for judicial review seeking the court’s intervention to reverse the Department’s specious decision. MCWC’s arguments at trial were sound and based on state law, as outlined in the Petition. We had hoped the “new” EGLE would rule on the merits and finally put a stop to Nestle’s ability to extract our water for free and damage our streams and lakes. We had hoped EGLE would honor the precedent from prior litigation that was won by MCWC in 2009 to reduce Nestle’s pumping to half of their sought-after 400 gpm amount from a similar aquifer in Mecosta County. EGLE apparently thought it could simply kick the can down the road and avoid a real ruling. MCWC has already spent over $200,000 in a process encouraged by EGLE, which it then dismissed on jurisdiction. This seems extremely unjust as well as illegal. Thus, we file the petition and take it to Circuit Court.