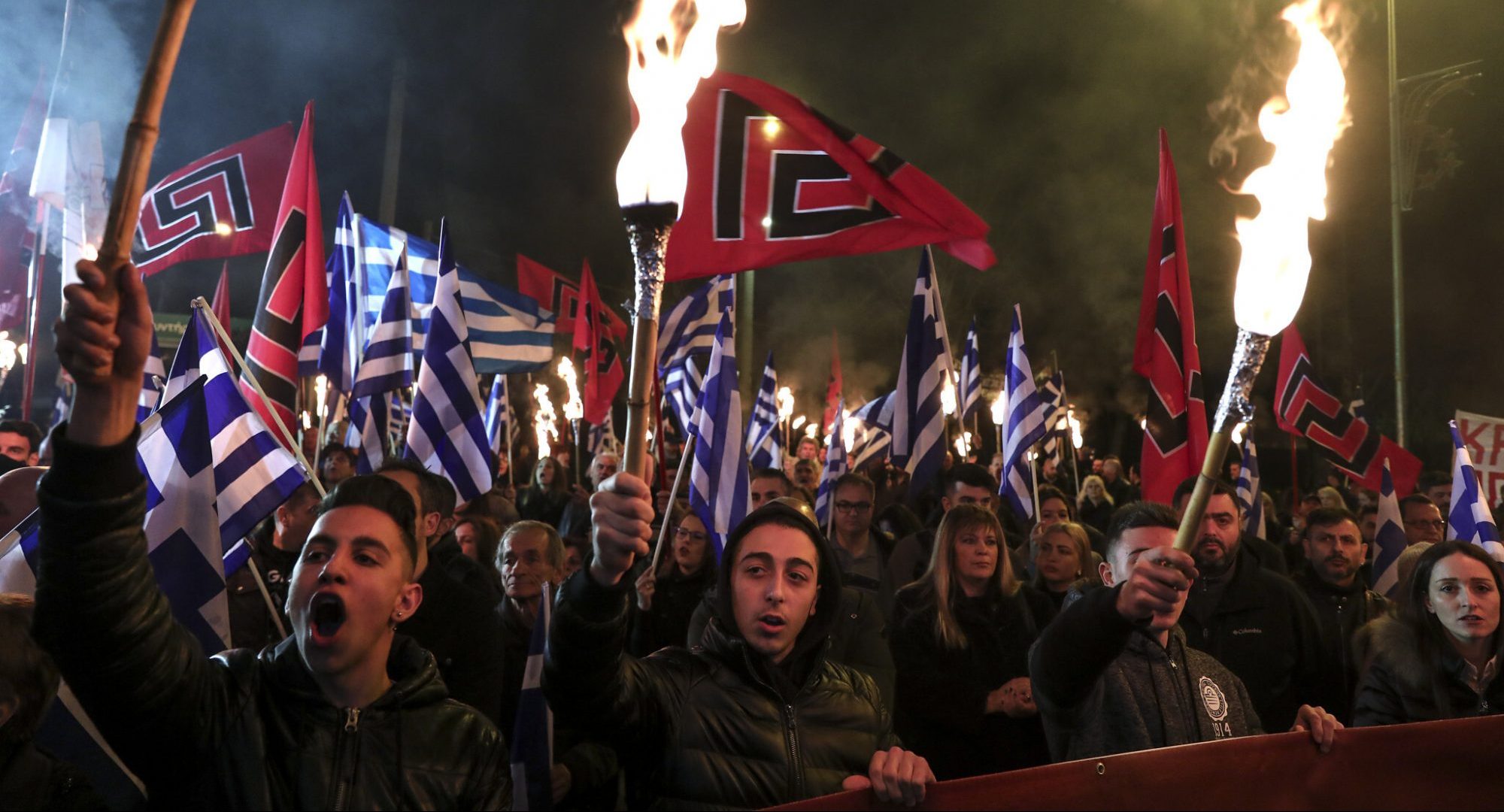 NOTE: This article was written before the court decision. Huff Post reports the decision was made:

“A Greek court ruled on Wednesday that the far-right Golden Dawn party was operating as a criminal organization, delivering landmark guilty verdicts following a politically charged five-year trial against dozens of defendants.

As news of the guilty verdicts broke, cheers and celebrations erupted among the crowd of at least 20,000 people gathered in an anti-fascist rally outside the Athens courthouse.”

After five years of deliberation, the sentence will be handed down tomorrow in the trial of Greek fascist organisation Golden Dawn – one of the most important anti-fascist legal cases since Nuremberg.

Golden Dawn is the political organisation that was founded during the early ’90s, started its criminal activity in 1992, gained political clout in 2010 and managed to elect 18 MPs in June 2012. Over this span of three decades, it committed dozens of crimes – for which, mostly, it had never been prosecuted.

The political system saw the Neo-Nazi organisation as a marginal group of far-right extremists. They might have loved Hitler, but they were too small to matter. However, when the economic crisis broke out in Greece, the never-ending impoverishment of the people along with the indifference of the political elite and their harsh policies, paved the way for the Golden Dawn to do serious groundwork and gain access to the masses for the first time.

It built up an anti-systemic profile, selected neighbourhoods of Athens and Piraeus with the right social criteria, and updated its rhetoric according to what the residents of each area expected to hear. More particularly, in the urban and high-density area of Agios Panteleimonas in Athens, Golden Dawn founded groups of “far-right indignants” to prevent migrant children from playing in the public playground.

These groups were quite vocal and successful at popularising a narrative of migrants as a force for lowering the wages and conducting criminal activities against the so-called “native Greeks.” They didn’t only developed the view that immigrants steal jobs which are meant for Greek people; they took it even further, attacking Communist trade unionists over the perception that immigrants caused unemployment among union members.

Golden Dawn lived a double life. During the day they enhanced their political reach through “solidarity actions for Greeks”; but their most successful activities were done during the night. Those activities included brutal attacks on immigrants, even going so far as murdering Shehzad Luqman, a Pakistani man in his late 20s.

From 2010 to 2013, Golden Dawn’s rise led to electing representatives to the municipality council of Athens (2010) and then to the Hellenic Parliament (2012). All these years, as it turned out, the political system provided a protective environment to the organisation – as the police and the judiciary cleared the way for the formation of fascist battalions in the tradition of the Blackshirts.

Internal reports coming from the party itself, combined with the fact that Golden Dawn has a tremendous political influence in the police union, show a clear linkage between the armed wing of the party and the police forces – often operating in co-operation at demonstrations and migrant centres. In the judicial field, every time indictments were brought to justice, charges were usually light, and the sentences soft.

After a sustained campaign to bring them to justice, Golden Dawn was finally prosecuted and faced trial – its verdict is due tomorrow, October 7th. Sixty-nine members, party officials and MPs of Golden Dawn have been charged. All members of the 2012 Golden Dawn’s parliamentary party face serious charges.

The triggering factor in bringing the trial was the murder of anti-fascist musician, Pavlos Fyssas, and the campaign which followed. Pavlos and his friends were attacked in 2013 by an organised and armed group of Golden Dawn members in the working-class area of Keratsini, Athens. He was stabbed three times. In his final minutes, Pavlos was able to point the killer out to police officers who – according to he eyewitnesses – were at the scene much earlier but did nothing to prevent the assault.

In addition to this, the fascist assault against Egyptian fishermen and Communist trade unionists provided an important backdrop to the trial. Golden Dawn members, together with officials and far-right activists, are accused of joining a criminal organisation. Profiling the Golden Dawn in this way, rather than a political party with mischievous members, was a turning point for the trial. As a result, its MPs are now charged as managers of a criminal enterprise.

The trial began on April 20th, 2015 and ended about a month ago. Last December, the public prosecutor made a personal, provocative proposal on the charges. She demanded the acquittal of all the party officials who are accused of criminal actions and assaults – except the murderer of Pavlos Fyssas. This suggestion, if put forward, will signal that Golden Dawn is no longer a criminal organisation.

This prospect angered Greek society. Shortly afterwards, organisations, parties and groups of the left, as well as broader anti-fascists, initiated the ‘They Are Not Innocent’ campaign as a collective cry of concern. The campaign was embraced by thousands of people who signed the founding manifesto and produced solidarity actions across Europe. Many political personalities, MEPs and MPs, writers, intellectuals and activists already support the campaign.

A Date for Europe to Remember

After five and a half years and 453 hearings, 68 defendants, 131 witnesses for the prosecution and 438 indictment documents, ten civil action attorneys and 50 defence attorneys, the prosecutor is expected to announce the final verdict of this historic trial tomorrow.

Large crowds will take to the streets outside the courthouse, as unions, left political parties, social movements and anti-fascist campaigns take part in a popular demonstration against fascism. The verdict is a crucial moment of truth for the Greek people, as well as for those who still carry far-right views in the public space.

For a portion of Greek society, having experienced a fascist discourse which became normalised over the past decade, throwing refugee children out of their neighbourhoods now seems normal. A kind of social civil war was fostered by the Troika and its austerity programme – and it has not gone away. Only a just and definitive court ruling on October 7th could put an end to it.

For Europe, this date will mark the end of one of the most significant political trials since Nuremberg. It will have an impact on every far-right party and movement. It could, in fact, signal the end of impunity for the operation of Neo-Nazi and neo-fascist groups which have been gaining strength on the continent.

If the decision goes the correct way, it will announce that democracy is something which can defend itself and that justice can be found even at challenging times. This is no mean feat in a society as traumatised by crisis as Greece has become.

Eleftheria Koumandou is a journalist and member of the ‘They Are Not Innocent’ campaign.

Stelios Foteinopoulos is a former International Relations Policy Officer at the Nicos Poulantzas Institute in Athens, Greece. He is now a European Union affairs analyst and a member of Momentum.