Above photo: Rally outside the British embassy in Washington,DC in June, 2018. By Margaret Flowers

April 11, 2019 – Today, Wikileaks publisher, Julian Assange, was expelled from the Ecuadorian embassy in London, where he was granted asylum almost seven years ago, and arrested by British police. He is being held for extradition to the United States. Assange is a journalist who should not be prosecuted for publishing the truth. 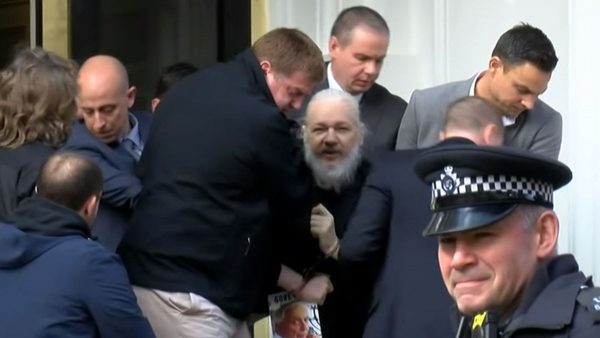 Julian Assange being removed from the Ecuadorian Embassy in the United Kingdom under arrest on April 11, 2019. From Ruptly video.

Contact the British embassy closest to you or plan a rally. The next day to organize around is May 2 when Assange will be back in court.

Contact us at info@popularresistance.org if you are planning an action so we can let others know.

Here is a list of British embassies in the U.S.: 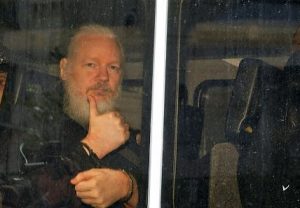 Assange in handcuffs in police wagon as he is being taken away from the embassy.

We urge people in the UK, US, Australia and around the world to protest the extradition and prosecution of Julian Assange at every step of legal proceedings. In court today it was disclosed that the US is seeking extradition of Assange over an alleged conspiracy with Chelsea Manning “to break a password to a classified US government computer,” according to the US Department of Justice.

Watch the #Unity4J online emergency vigil here. This vigil takes place every Friday night. Tune in and spread the word:

Popular Resistance will be doing all it can to build a broad movement for freedom for Julian Assange so he can continue his important work as a publisher and journalist. Assange has committed no crime and has had his political asylum, which has been recognized by the UN, taken away from him for no legitimate reason.

The prosecution of Julian Assange is an attack on Freedom of the Press in the 21st Century. WikiLeaks is democratizing journalism, redistributing power and increasing transparency. Publishing the truth is not a crime. The attack on Assange is a threat not only to journalism but opposition to war and empire. People need to stand up for Assange, our right to know and build a movement against US imperialism.

Wikileaks’ breakthrough journalism has been a public service that exposed US war crimes in Iraq and Afghanistan, human rights violations at the Guantanamo Bay prison and showed corporate corruption of US foreign policy in State Department cables. Wikileaks has published documents concerning governments and corporations throughout the world.

Wikileaks has democratized the media by creating the ability for people to expose crimes of governments and corporations by anonymously leaking documents that show their activities. This innovation gives power to people to be the media. Such power is essential at this time of corporate concentration of media, where six companies control 90 percent of the news.

Wikileaks documents have been covered in major news outlets like the New York Times and the Washington Post and have had an impact on the development of public policies.

The US and international courts should be prosecuting those who committed crimes exposed in the documents published by Wikileaks, not the media outlet who exposed the crimes.

Chelsea Manning, who leaked documents to Wikileaks, is being held for refusing to testify before a grand jury in Alexandria, VA. She refuses to testify in secret against Julian Assange. Manning should be released. Manning and Assange are sacrificing their freedom for our right to know

Yesterday, was the 30th Anniversary of the Whistleblower Protection Act (WPA). Beginning under President Obama and continuing under President Trump, whistleblowers are being arrested and charged with the Espionage Act at increasing levels. From the time the Espionage Act was passed in 1917 until the Obama administration took office, it was used against one person. Eight people were prosecuted by the Obama Department of Justice. The number of investigations of leaked information has tripled under the Trump administration.