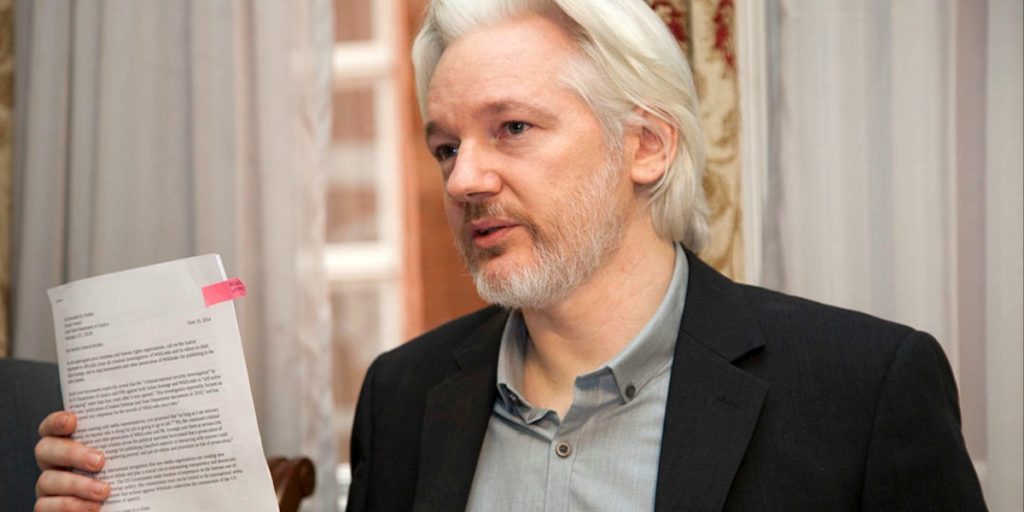 Julian Assange: At the Forefront of 21st Century Journalism

How WikiLeaks is democratizing journalism, redistributing power and increasing transparency

If there were ever a doubt about whether the editor-in-chief of WikiLeaks, Julian Assange, is a journalist, recent events erase all those doubts and put him at the forefront of a movement to democratize journalism and empower people.

The U.S. Department of Justice is still trying to find a way to prosecute Assange and others associated with WikiLeaks. A key to their prosecution is claiming he is not a journalist, but that weak premise has been made laughable by recent events.

The list of WikiLeaks revelations has become astounding. During the North African and Middle East revolts WikiLeaks published documents that provided people with critical information. The traditional media has relied on WikiLeaks publications and is now also emulating WikiLeaks.

WikiLeaks has been credited by many with helping to spark the Tunisian Revolution because they provided information about the widespread corruption of the 23 year rule of the Ben Ali regime. PBS pointed to ten cables dating from 2006 to 2009 published by WikiLeaks in November that were translated and shared widely in Tunisia detailing the corruption and authoritarian rule of Ben Ali who lived in opulent luxury while Tunisians struggled. Foreign Policy reported that “the candor of the cables released by WikiLeaks did more for Arab democracy than decades of backstage U.S. diplomacy.”

In Egypt, WikiLeaks publications provided democracy activists with the information needed to spark protests, provided background that explained the Egyptian uprising, described the suppression of opinions critical of the regime by arrest and harassment of journalists, bloggers and a poet; showed the common use of police brutality and torture; the abuse of the 1967 emergency law to arrest and indefinitely detain journalists, activists, labor leaders and members of the Muslim Brotherhood; as well as how rivals were removed to ensure Gamal Mubarak succeeded his father. Traditional media publications like the New York Times relied on WikiLeaks to analyze the causes of the uprising.

Another set of documents described how Israel and the U.S. wanted Omar Suleiman to replace Mubarak. Suleiman, a military intelligence officer for three decades, was described by Secretary of State Clinton, as the preferred successor. WikiLeaks wrote an article describing Suleiman’s close relationship with the United States. Suleimen described Egypt as “a partner” with the U.S. and the U.S. described him as “the most successful element of the relationship” with Egypt. The long history of Suleiman working with Israel to suppress democracy in Gaza, keeping the people of Gaza hungry and being in constant contact with Israel through a hotline was revealed. WikiLeaks also showed that Suleiman shared U.S. and Israeli concern over Iran, and was disdainful of Muslims in politics as well as the Muslim Brotherhood. All of this made Suleiman very popular with Israel and the U.S., but unacceptable to democracy advocates.

The United States used some WikiLeaks publications to show that it had been critical of Egypt and exerted private pressure, as well as support for democracy activists like Mohammad ElBaradei. Despite what has been portrayed in the traditional media, WikiLeaks published materials with an agenda for transparency and an informed public, not an intent to harm the U.S.

WikiLeaks informed the Bahrain public about their government’s cozy relationship with the U.S. It described a $5 billion joint-venture with Occidental Petroleum, and $300 million in U.S. military sales. ABC reported on WikiLeaks documents that described the close relationship between U.S. and Bahrain intelligence agencies and how the U.S. Navy is the foundation of Bahrain’s national security. This was emphasized to General Patraeus along with their common opposition to Iran, Al Qaeda in Iraq and their desire for U.S. troops to stay in Iraq.

WikiLeaks has been criticized by U.S. enemies. Iranian President, President Mahmoud Ahmadinejad, described WikiLeaks as U.S. “intelligence warfare” saying: “These documents are prepared and released by the U.S. government in a planned manner and in pursuance of a goal.” WikiLeaks was criticized by Libya’s Ghaddafi who shut down Facebook in Tripoli and sporadically shut off the Internet to prevent Libyan’s from knowing the truth. No doubt WikiLeaks publications embarrassed Ghaddafi adding fuel to internal opposition to his regime.

WikiLeaks is filling a void with traditional media as the level of distrust of the mass media is now at record highs. A recent Gallup Poll found 57% of Americans do not trust the media and a Pew Poll found a record low 29% trust the media. There is good reason for distrust. The New York Times helped start the Iraq War by publishing the false weapons of mass destruction story. It recently misled the public about a Blackwater employee arrested in Pakistan by hiding the fact that he worked for the CIA, while reporting that Obama said he was a diplomat. Even the way the Times and Washington Post reported on WikiLeaks documents showed reason for distrust. WikiLeaks described Iranian long-range missiles that could hit European cities but also reported that Russian intelligence refuted the claim. The Times and Post evidently made a decision to exaggerate Iranian capability and mislead readers by excluding the Russian intelligence report. The Times admits it provides WikiLeaks documents to the government in advance and excludes material at the request of the government.

There has been a steady decline in readers and viewers of newspapers and television news since 1980. The decline began before the existence of the Internet. The decline in younger readers has been particularly noticeable — 30 years ago 60% of people under 36 read a newspaper daily, now it is 30%. The Internet has seen a steady rise in viewers and news outlets.

Even though some in the traditional media are threatened by WikiLeaks, more and more outlets are acknowledging their journalism. Reporters Without Borders hosts a mirror site of WikiLeaks as “a gesture of support for WikiLeaks’ right to publish information without being obstructed.” Similarly, a mainstream French newspaper Liberation announced a “mirror-WikiLeaks” site on its website

Jeff Jarvis of the City University of New York’s Graduate School of Journalism writes: “We in journalism must recognize that WikiLeaks is an element of a new ecosystem of news. It is a new form of the press. So we must defend its rights as media. If we do not, we could find our own rights curtailed. Asking whether WikiLeaks should be stopped is exactly like asking whether this newspaper should be stopped when it reveals what government does not want the public to know. We have been there before; let us never return.”

The Guardian, a WikiLeaks partner wrote in an editorial: “There is a need as never before for an internet that remains a free and universal form of communication. WikiLeaks’ chief crime has been to speak truth to power. What is at stake is nothing less than the freedom of the internet.”

Jay Rosen of the New York University journalism school describes WikiLeaks as the first “stateless news agency.” The actions of WikiLeaks, he noted, show our news organizations how “statist they really are” and leakers going to WikiLeaks rather than the traditional media, shows how distrustful people are of the corporate media. This all shows that the “watchdog press has died” and WikiLeaks is filling the void.

The void will exist — and be filled — whether or not the Department of Justice prosecutes Julian Assange. The Economist writes: “With or without WikiLeaks, the technology exists to allow whistleblowers to leak data and documents while maintaining anonymity. With or without WikiLeaks, the personnel, technical know-how, and ideological will exists to enable anonymous leaking and to make this information available to the public. Jailing Thomas Edison in 1890 would not have darkened the night.”

The traditional media is emulating WikiLeaks. Al Jazeera has created a “transparency unit” that launched in January 2011 and has published the Palestine Papers, which describe the Palestinian-Israeli peace process, based on leaked documents. The New York Times is now talking about creating its own version of WikiLeaks. Students at CUNY’s Graduate School of Journalism designed LocaLeaks, allowing anonymous encrypted leaks to over 1,400 U.S. newspapers. Government employees and business insiders can now report illegal or unethical practices without being identified.

The journalism democracy door has been opened, power to report is being redistributed, government employees and corporate whistleblowers are being empowered and greater transparency is becoming a reality. The United States would be better off accepting these realities than prosecuting the news organization that showed the way. Prosecution will highlight the utter hypocrisy of the U.S. government, showing the world it does not mean what it says when it claims that freedom of the speech and press are cornerstones of democratic government.