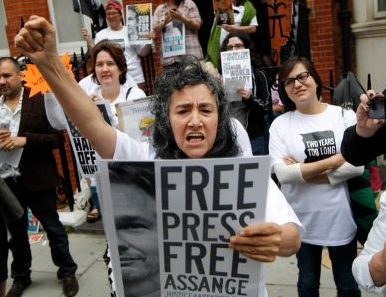 Above: Supporters of WikiLeaks founder Julian Assange hold a vigil outside the Ecuadorian Embassy in London to mark his two years in refuge at the embassy, Thursday, June 19, 2014. Julian Assange entered the embassy in June 2012 to gain political asylum to prevent him from being extradited to Sweden, where he faces allegations of sex crimes, which he denies.(AP Photo/Sang Tan) The Associated Press

Below An Amazing Infographic Of The Assange Story

LONDON (AP) — The gathering at the Ecuadorean Embassy in London has the feel of something which may become an annual fixture.

For the second time in as many years, journalists were invited Thursday to the embassy to mark the anniversary of WikiLeaks chief Julian Assange‘s stay there — a bid to escape extradition to Sweden, where he is wanted over allegations of sexual misconduct, and to the United States, where an investigation into WikiLeaks’ dissemination of hundreds of thousands of classified U.S. documents remains live.

Supporters — including one with a figure of Assange on a crucifix — chanted slogans outside the embassy. Inside, Assange said he has no intention of going to Sweden because he has no guarantee he wouldn’t subsequently be sent to the U.S.

Dressed in a suit and sneakers and appearing relaxed, he traded pleasantries with Ecuadorean Foreign Ministe Ricardo Patino as reporters crowded around to listen in on the banter.

“I can see that your beard is longer now,” Patino joked via videolink from Ecuador, referring to Assange’s wispy white stubble. Assange in turn paid tribute to Ecuador’s “robust resistance” to pressure from outside powers — which he said is why “I have a liberty to work today.”

Assange had been under a form of supervised release in the U.K., but shortly after losing his battle in Britain’s highest court he jumped bail and applied for asylum at the Ecuadorean Embassy on June 19, 2012.

British police on guard outside the embassy have orders to arrest him should he ever step out.

Patino told journalists that negotiations with Britain over Assange’s fate were at an impasse and that there would be no attempt to force him back to Sweden.

“We will protect Julian Assange for as long as necessary,” he said.

Below is an infographic by Sommerset Bean describing the history that led to Julian Assange being held in the Ecuadorian Embassy.