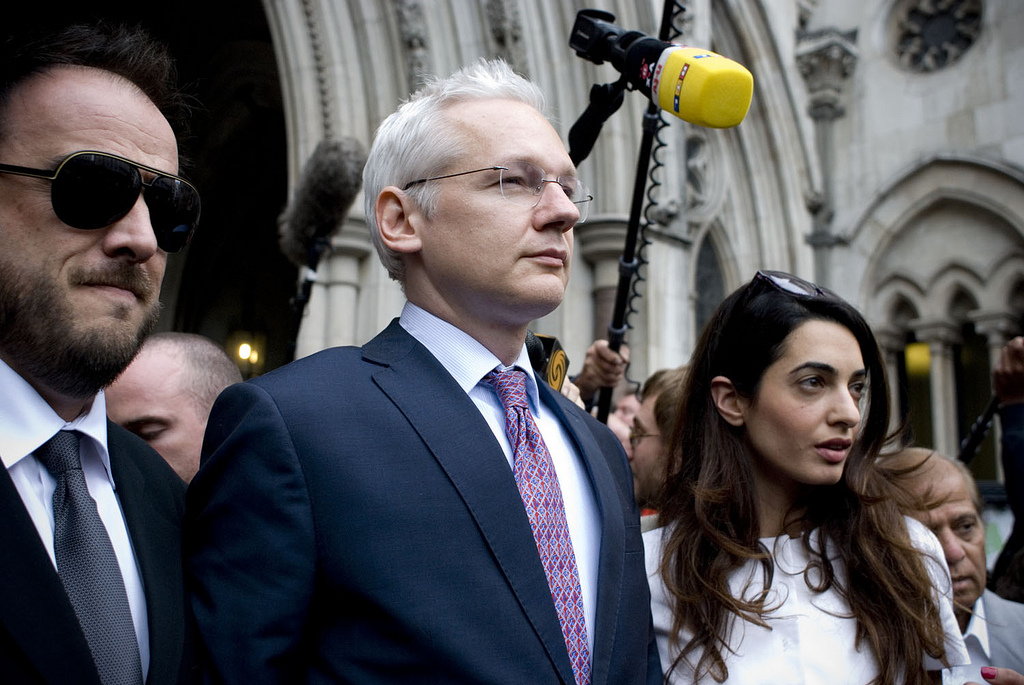 Before being abruptly cut off by an Ecuadorian government lawyer during a court hearing on Monday, WikiLeaks founder and publisher Julian Assange accused that government of seeking to end his asylum in its London embassy and hand him over to the United States.

Assange spoke from the tiny embassy via teleconference to a hearing in Quito of a lawsuit in which he is challenging a draconian protocol that President Lenín Moreno’s government has sought to impose on him.

Assange said the new rules were a sign Ecuador was trying to push him out, and that Moreno had already decided to end his asylum but had not yet officially given the order. Before Assange could say any more, Ecuador’s top government lawyer, Inigo Salvador, interrupted him and warned him not to make political statements during the proceedings.

It was the first time the WikiLeaks publisher has been able to speak to the world since March, when Moreno’s government cut off all his communications after he criticised the detention of Catalan politicians.

For more than seven months, Assange has been subjected to a regime of confinement worse than that inflicted on convicted criminals in maximum-security prisons, preventing him from communicating even with his own children and parents.

In line with this silencing of Assange, court officials told journalists they could not record any of the statements made during the hearing. Nevertheless, reports of Assange’s warning of the move against him were broadcast internationally. This is an indication of the widespread global support for the courageous journalist and for WikiLeaks, which continues to publish leaks exposing the crimes of the US and other governments, along with the corporate giants that work closely with them.

Assange launched the legal challenge this month, accusing the Moreno government of violating his “fundamental rights and freedoms” with its new stipulations. The protocol forbids him from engaging in activities that “could be considered political or interfering with the internal affairs of other states” and declares that his asylum will be “terminated” unless he “scrupulously” adheres to all its terms.

Significantly, Ecuadorian Foreign Minister Jose Valencia, who has supervised the preparation of the new protocol, declined to comment on Assange’s assertion that Ecuador sought to hand him over to the United States.

The protocol—contemptuously depicted by many corporate media outlets as being about trivial issues such as Assange’s cat and personal hygiene—is a clear violation of the right to political asylum. It not only prohibits the WikiLeaks founder from making any political comments deemed detrimental to Ecuador or its “good relations” with “any other state.” It also makes clear that he and his communications, as well as anyone who visits him, will be subjected to surveillance, with the results shared with US and British spy agencies.

The protocol further stipulates that Assange undergo a medical examination every three months, at his own expense, and states that doctors can recommend he be evacuated from the embassy if they conclude that he requires urgent treatment. Exploiting Assange’s deteriorating health after more than six years of confinement in a tiny space, these requirements are obviously designed to force him to quit the embassy or provide a pretext to evict him.

The WikiLeaks founder was forced to seek refuge in the embassy in 2012 after trumped-up Swedish government allegations of sexual misconduct were brought forward as a pretext for his imprisonment in Britain. This would have been followed by extradition to the US to face concocted espionage charges that could see him jailed for life or even executed.

Assange, an Australian citizen, was compelled to turn to Ecuador because the Labor Party-led government in Australia fully lined up with the Obama administration and denied Assange his right to assistance and protection against persecution—a stand continued to this day by the present Liberal-National government.

The groundless Swedish allegations—no charges were ever laid—were finally dropped last year, but the British courts refused to lift their charges that Assange had skipped bail on a European arrest warrant. The British government has repeatedly refused to guarantee that Assange will not be extradited to the US.

The pressure from Washington for Assange’s removal from the embassy has increased in recent weeks. In a departure from Ecuador’s previous practice of maintaining dialogue with British authorities over Assange’s situation, Valencia told Reuters last week that the government would no longer intervene on his behalf.

That was after two leading members of the US House Foreign Relations Committee sent a threatening letter to Moreno insisting that he “hand over” Assange to the “proper authorities” as a precondition for improving relations with the United States. The bipartisan letter branded the prize-winning journalist and publisher a “dangerous criminal and a threat to global security.”

US federal prosecutors in Alexandria, Virginia, have maintained a long-running grand jury investigation into WikiLeaks, which began when the site published thousands of secret US files exposing war crimes in Afghanistan and Iraq, and US regime-change operations and mass surveillance around the world. According to one source cited by Reuters, the investigation now includes a probe into leaks of CIA documents that revealed its computer hacking and cyber warfare capacities.

In recent months, WikiLeaks has also published material exposing how Amazon cloud data centres serve the US intelligence agencies, the repressive operations of the US Immigration and Customs Enforcement (ICE) agency and French arms deals to Gulf state dictatorships.

Ongoing attempts are being made by US Democrats to drag Assange into a supposed Russian conspiracy to manipulate the 2016 US presidential election. Based on amalgams, distortions and outright lies, these allegations stem from WikiLeaks’ publication of emails exposing the Democratic National Committee’s efforts to rig the party’s 2016 presidential primaries in favour of Hillary Clinton, and transcripts of Clinton’s speeches to bankers documenting her role as a stooge of Wall Street and a warmonger.

The intensifying moves against Assange and WikiLeaks are directly bound up with the drive by the US government and the major technology corporations to impose a regime of censorship on the internet, restricting access to anti-war, anti-government and socialist views.

More broadly, in preparation for major wars abroad and repression at home, the capitalist establishment wants to lock away Assange for good in order to intimidate all those who are fighting against militarism, social inequality and the assault on democratic rights.

That is why the mounting threats against Assange must be answered by the broadest possible mobilisation of the international working class to demand his immediate and unconditional freedom, as part of a broader struggle to overturn the capitalist system and its wars, inequality and censorship.