Message from Mumia to Prison Radio:

Now, cataracts: Do you know what cataracts are? Imagine you’re wearing a very dark pair of sunglasses; Now smear the lenses with thick swabs of Vaseline. That’s cataracts–from the inside. But it doesn’t end, for there is no pair of glasses to remove. It’s… your eyes. They don’t work anymore like they used to.

There’s a man here, an “Old Head” who is functionally blind (although he has some vision in one eye). One of his eyes is as blue as a robin’s egg, but it’s dead. He has no vision in it. Imagine that; a Black man with a blue eye! That’s what prison eye care can get you! alla best, maj♪”

July 3 has traditionally been a day of action calling for the release of political prisoner Mumia Abu-Jamal.  On the anniversary of the day he was originally sentenced to death row, we have filled the streets of Philadelphia with rallies and marches.

This July 3, on the 37th anniversary of his incarceration we are asking your participation in a different type of mass action.  In recent weeks the focus of Mobilization4Mumia.com has been to raise awareness of the medical crisis Mumia currently faces as the PA Department of Corrections (DOC) has delayed his access to cataract surgery.  The petition below calls not only for this medically necessary procedure to be performed without delay, but also for the release of Mumia, a factually innocent man.

On July 3, 2019 please take time to make calls to the numbers below.  Please sign the petition (on-line) if you haven’t and share it with your social media networks.  Please download the petition and collect signatures that we will later deliver to Krasner and others.  Take action in your community as part of a nationwide demonstration of support for Mumia.

And last, please consider making a donation or a regular monthly contribution to further the work to free Mumia.

Head over to the Mobilization for Mumia website to download a printable version of the petition today. 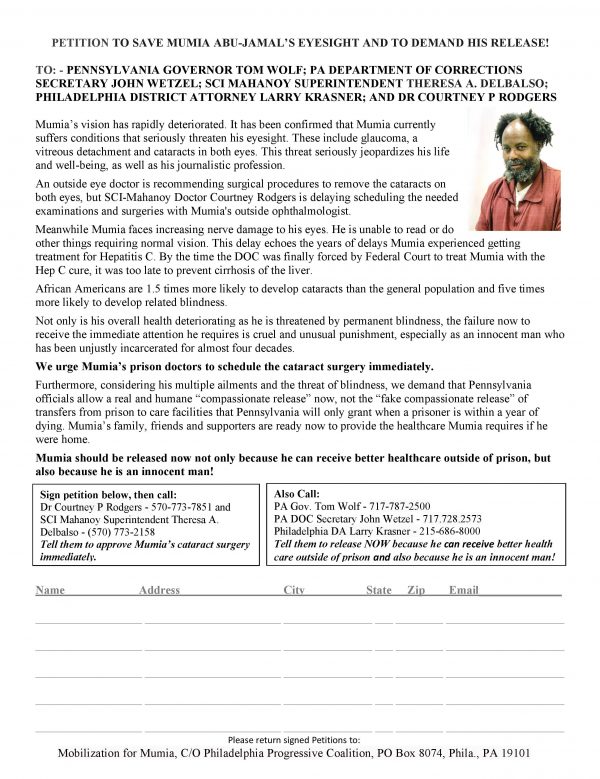