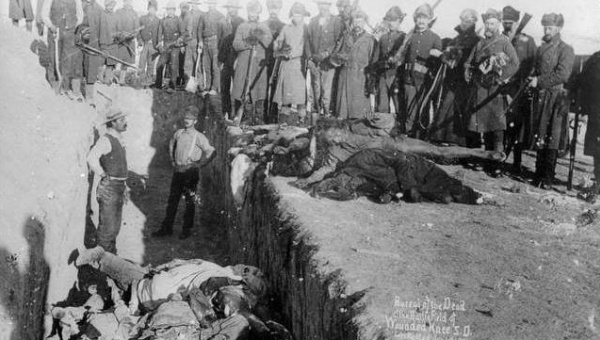 July 4th: No Time For Celebration For Indigenous Peoples In US

Above Photo: Bodies beings dumped into a mass grave at Wounded Knee. Between 150-300 Lakota men, women and children were killed by U.S Cavalry. | Photo: Archive

Without Indigenous resistance, the intended genocide of the Native people by the settlers would have completely succeeded.

The Anglo-American settlers’ violent break from Britain, from 1775 to 1783, paralleled a decade of their search and destroy annihilation of Delaware, Cherokee, Muskogee, Seneca, Mohawk, Shawnee, Miami and other nations’ villages and fields, slaughtering the residents without distinction of age or gender and overrunning the boundaries of the 13 colonies into unceded Native American territories.

July 4 symbolizes the beginning of the “Indian wars” and “westward movement” that continued across the continent for another century of unrelenting U.S. wars of conquest. That was the goal of independence for both the seasoned killers of the so-called “revolutionary army” and the militias using extreme violence against Indigenous noncombatants to subjugate and expel.

They were met with resistance movements and confederations identified with leaders such as Buckongahelas of the Delaware; Alexander McGillivray of the Muskogee-Creek; Little Turtle and Blue Jacket of the Miami-Shawnee alliance; Joseph Brant of the Mohawk; and Cornplanter of the Seneca, who called the Anglo counter-insurgents “town destroyers.” Following U.S. independence, the great Tecumseh and the Shawnee confederation also joined the struggle.

Without this resistance, the intended genocide of the Native people would have completely succeeded. Although Native nations were “ethnically cleansed” in the region east of the Mississippi by 1850 through forced relocation, they never ceased to exist. These are truer heroes for our children to emulate than the “Founding Fathers.”

The program of expansion and the wars against the Indigenous farmers of the large valley of the Ohio River and the Great Lakes region began decades before July 4, with the so-called “French and Indian War,” which was the North American extension of the Seven Years’ War between France and Britain in Europe.

In the Treaty of Paris of 1763, France ceded Canada and all claims east of the Mississippi to Britain. In the course of that war, Anglo-American settlers intensified their use of counter-insurgency violence against Indigenous peoples’ resistance to incursions into the territories of the Ottawa, Miami, Kickapoo, and other nations. By the end, significant numbers of Anglo settlers were squatting on Indigenous lands beyond the colonies’ boundaries and land speculation was the road to riches for a few individuals.

But, to the settlers’ dismay, soon after the 1763 treaty was signed, King George III issued a proclamation that prohibited British settlement west of the Allegheny-Appalachian mountain chain, ordering those who had illegally settled there to surrender their claims and return to the colonies. Soon it became clear that English authorities needed far more soldiers to enforce the edict, as thousands of settlers ignored it and poured over the mountains and squatted on Indigenous lands, provoking armed Indigenous resistance.

In 1765, the British Parliament imposed the Stamp Act on the colonies, a tax on all printed materials that had to be paid in British pounds, not local paper money. The iconic settler slogan of “taxation without representation” that marked the surge for independence from Britain derived from this imposed tax was specious, or at best not the whole story. The tax levied was to pay the cost of housing, feeding and transporting British soldiers to enforce the British colonial boundaries. Thus the complaints iterated in the July 4, 1776 Declaration of Independence largely focused on the measures used by the British to prevent expansion of Anglo land acquisition and settlement.

By the early 1770s, Anglo-American settler terror against Christianized Native American communities within the colonies, and violent encroachment on those outside the colonial boundaries, raged and illegal speculation in stolen Indigenous lands was rampant. In the southern colonies especially, Anglo farmers who had lost their land to larger, more efficient, slave-worked plantations, rushed for Native farmlands over the mountain range.

These armed squatters thus set, as military historian John Grenier writes, “a prefigurative pattern of U.S. annexation and colonization of Indigenous nations across the continent for the following century: a vanguard of farmer-settlers led by seasoned ‘Indian fighters,’ calling on authorities/militias of the British colonies, first, and the U.S. government/army later, to defend their settlements, forming the core dynamic of U.S. ‘democracy.’”

In 1783, the British withdrew from the fight to maintain the insurgent 13 colonies, not because of military defeat, but rather in order to redirect their resources to the occupation and colonization of South Asia. The British East India Company had been operating in the subcontinent since 1600 in a project parallel to Britain’s colonization of the North American Atlantic Coast.

The British Crown determined that great wealth was to be made in Asia. Britain’s transfer of its claim to Indian Country west of the colonies to the settlers spelled disaster for all Indigenous peoples east of the Mississippi, and ultimately all of the North American area that would be claimed and occupied by the United States. Britain’s withdrawal in 1783 opened a new chapter of unrestrained violent colonization.

The creation of the constitution began in 1785, but was not approved by all the states and put into effect until 1791. Meanwhile, the interim Continental Congress got to work on a plan for colonization over the mountain range. The Land Ordinance of 1785 established a centralized system for surveying and distributing land, with seized Native lands being auctioned off to the highest bidder.

The Northwest Ordinance of 1787, referring to the Ohio country, set forth a colonization procedure for annexation via military occupation, the transformation of land to civilian territorial status under federal control and finally through statehood. These were the first laws of the incipient republic, revealing the motive for independence.

It was the blueprint for the taking of western Indigenous lands, with lines for future settlements reaching to the Pacific. The maps contained in the land ordinances, which laid out land in marketable square-miles plots, were not new. They were the work of colonial elites during the decades before the war of independence, including George Washington, a leader of the Virginia militia that led armed surveying teams into Ohio country, making him one of the most successful land speculators of the time.

Delaware Nation leader, Buckongahelas, said in 1781, “They do what they please. They enslave those who are not of their color, although created by the same Great Spirit who created us. They would make slaves of us if they could, but as they cannot do it, they kill us. There is no faith to be placed in their words … I know the long knives; they are not to be trusted.”

The ruling elite of the colonies were all land speculators, with land and slave ownership being the very basis of the economy of the first nation-state born as a capitalist state and by 1850, the wealthiest economy in the world.

In 1801, President Thomas Jefferson aptly described the new settler-state’s intentions for horizontal and vertical continental expansion as an “empire for liberty,” stating, “However our present interests may restrain us within our own limits, it is impossible not to look forward to distant times, when our rapid multiplication will expand itself beyond those limits and cover the whole northern, if not the southern, continent, with a people speaking the same language, governed in similar form by similar laws.”

The policy of U.S. settlers taking land by force was not an accidental or spontaneous project or the work of a few bad apples. The violent theft of Native American land by settlers was inscribed as an individual right in the Second Amendment of the U.S. Constitution, second only to freedom of speech. Male colonial settlers had long formed militias for the purpose of raiding and razing Indigenous communities and seizing their lands and resources.

The Second Amendment, ratified in 1791, legalized these irregular forces: “A well regulated Militia, being necessary to the security of a free State, the right of the people to keep and bear Arms, shall not be infringed.” The continuing significance of that “freedom,” specified in the Bill of Rights, reveals the settler-colonialist cultural roots of the U.S. that appear even in the present as a sacred right. Such militias were also used as “slave patrols” in the South, forming the basis of the U.S. police culture after the end of legal slavery.

What the Reverend Martin Luther King, Jr. said in 1967, that the United States “is the greatest purveyor of violence in the world today,” remains true and even more deadly today, with no end in sight. The United States was founded on violence, conquest, militarism and slavery— almost always making war somewhere.

For the sake of humanity and our own children, let us own this truth and transform July 4 into a day of mourning, a solemn occasion, telling the true stories, learning from the tragic birth of this nation, accompanied by implementation of full self-determination for the Indigenous nations of this continent and reparations for slavery.