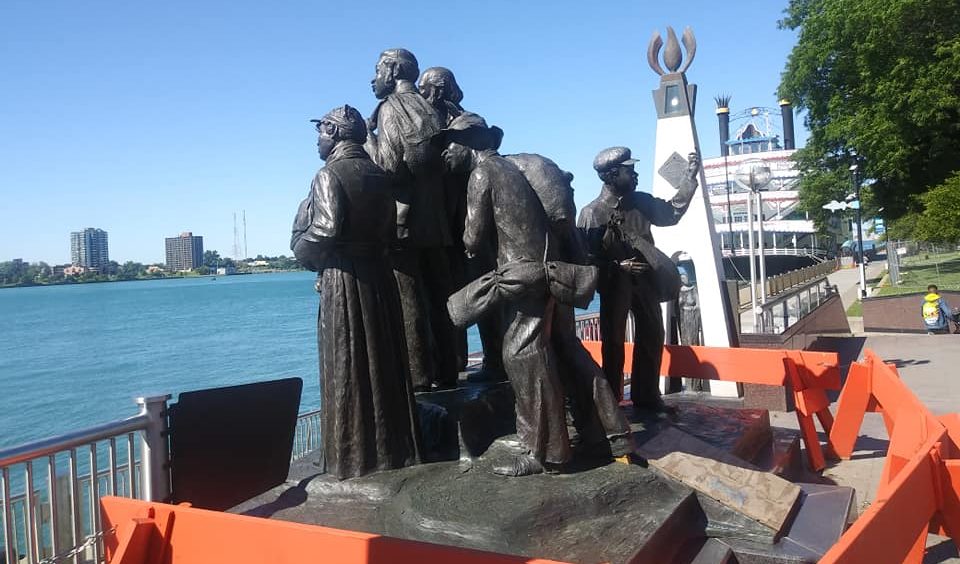 Above photo: Detroit Gateway to Freedom Monument at the Riverfront looking towards Canada, June 18, 2022.

Racial violence and social neglect characterize the present period in the South as well as other regions of the U.S.

Juneteenth was designated as a federal holiday during 2021 by the United States administration of President Joe Biden.

This act of recognition came in the aftermath of an upsurge in mass demonstrations and electoral mobilizations in response to the rash of police and vigilante killings of African Americans during 2020-2021.

The holiday had been recognized and celebrated within African American communities largely concentrated in Texas and other areas of the South for over a century. After the surrender of the Confederate military forces in early April 1865, the fate of slavery as an economic system was sealed.

Nonetheless, then President Abraham Lincoln had issued the Emancipation Proclamation on September 22, 1862, with immediate effect beginning January 1, 1863. The document did not order the emancipation of all four million Africans held in bondage. The proclamation only applied to those southern states that remained in rebellion against the federal government in Washington, D.C.

The Confederate states which sought to withdraw from the Union were South Carolina, Mississippi, Florida, Alabama, Georgia, Louisiana, Texas, Virginia, Arkansas, North Carolina and Tennessee. The state of Tennessee was the last to succeed and the first to return to the Union after the defeat of Confederate forces in key areas of the state and the appointment of Andrew Johnson by Lincoln as the military governor in 1862. Also not included in the Emancipation order were the border states of Maryland, Delaware, Missouri and Kentucky, where slavery existed although they did not withdraw from the U.S. central government.

From the beginning of the war, many enslaved Africans fled the plantations seeking freedom after nearly 250 years of involuntary servitude. Thousands took up residence near Union military camps and were initially labelled as “contraband” and not refugees.

At the same time the Emancipation Proclamation went into effect, the enlistment of Africans into the Union military began in earnest. By the conclusion of the Civil War (1861-1865), approximately 200,000 Black people had served in the army and navy of the Union forces.

As it relates specifically to Juneteenth, one source notes that: “Juneteenth (short for “June Nineteenth”) marks the day when federal troops arrived in Galveston, Texas in 1865 to take control of the state and ensure that all enslaved people be freed. The troops’ arrival came a full two and a half years after the signing of the Emancipation Proclamation. Juneteenth honors the end to slavery in the United States and is considered the longest-running African American holiday. On June 17, 2021, it officially became a federal holiday. Confederate General Robert E. Lee had surrendered at Appomattox Court House two months earlier in Virginia, but slavery had remained relatively unaffected in Texas—until U.S. General Gordon Granger stood on Texas soil and read General Orders No. 3: ‘The people of Texas are informed that, in accordance with a proclamation from the Executive of the United States, all slaves are free.’”

Yet the struggle to end enslavement began among the African people themselves many of whom rebelled before being captured on the continent and during the course of the Middle Passage, the dangerous and deadly trek across the Atlantic Ocean to the Western Hemisphere, when they were subjected to an entirely dehumanizing process of subordination. Continuing this process of rebellion against enslavement was the multi-faceted forms of resistance being flight from enslavement, revolts and actions within the legal system to demand their emancipation.

Several historians of the antebellum period have observed that the economic system based upon African enslavement was already in decline by the 1850s. The desperation on the part of the landowning planters’ class in the South led to the separation of the states and the eventual Civil War where hundreds of thousands died.

The Underground Railroad was a mass network of individuals, organizations and institutions which facilitated the flight and freedom of Africans from bondage in the U.S. The city of Detroit became a major thoroughfare for the Underground Railroad due to its close proximity to Canada where slavery was abolished after 1833.

A rebellion erupted during June and July in 1833, after the Black community freed Thornton and Lucie Blackburn who had escaped enslavement two years before in Kentucky. The couple had been arrested by agents of the slavocracy and placed in detention in Detroit. A court ruling ordered them back into slavery in Kentucky.

In response, two African American women were able to smuggle Lucie out of the jail located in downtown Detroit. Later a group of armed African Americans went to the jail and demanded the release of Thornton. A brawl ensued where Thornton was liberated by the Black community and the couple was transported across the Detroit River to Windsor, Ontario.

Violence in the city continued until July 30 after troops were brought into Detroit. Soon afterwards, a number of racist laws were passed demanding the bonding of all African American residents in the amount of $500 and a 9:00pm curfew. Consequently, many African Americans left Detroit to take up residence in the province of Ontario, Canada where thousands had settled all the way up to the beginning of the Civil War.

In October 2001, as part of the 300th anniversary commemorations of the founding of Detroit as a colonial outpost by the French, the Gateway to Freedom Monument was dedicated on the banks of the Detroit River facing the nation of Canada. The Indigenous Native Americans underwent a period of displacement and genocide over the next century leaving the city of Detroit and the state of Michigan open to resettlement by Europeans of both French and British descent. African Americans migrated into the city during the 19th and 20th centuries largely spawned by the Underground Railroad and the eventual industrial expansions in shipping, timber, copper, steel and automobiles.

Twenty-one years later, the Gateway to Freedom Monument is in serious decline. An African American tour of the historic sites related to the Underground Railroad revealed this on June 18.

In fact, the damage to the monument was documented during June 2021. Apparently, a crowbar was utilized to intentionally rupture the work of art which consists of representations of several leading African Americans involved in the Underground Railroad.

An article published from a Detroit Fox News report on June 2, 2021, featured quotes from Sharon Sexton and Barbara Smith of the Underground Railroad Exploratory Collective. There was uncertainty over who actually owned the monument and where the fund which was created to build the work of art was actually located. The City of Detroit and the Downtown Development Authority (DDA) claimed it would investigate these questions and take action to rehabilitate the structure.

However, more than a year has passed, and the monument remains in a damaged state. This development is indicative of the politics of Detroit where the interests of the majority African American population have been completely eradicated.

Obviously, the current corporate- imposed administration downtown would rather funnel tax revenues, federal pandemic and infrastructural assistance to billionaires. Anything which supports or honors the majority African American population of Detroit is denied and categorized as “illegal”.

The damage to the monument representing self-organization aimed at total emancipation is reflective of U.S. domestic policy as a whole. Although the overwhelming majority of African Americans voted for the current Democratic-dominated administration and Congress in Washington, the principal needs and demands of this constituency have not been addressed.

Those politicians who hold office in Detroit are members of the Democratic Party. Nonetheless, billions of dollars are still being siphoned from tax rolls and federal assistance to ensure the profitability of the ruling class interests. Just recently, yet another scheme to codify an additional $60 million in tax breaks for the Hudson Project led by billionaire Dan Gilbert, has been presented to the City Council, five of whom were subsidized by Rocket Mortgage and associated entities.

In order for the needs of the African American people to be resolved, there must be a reversal of political dependency upon both dominant parties who only serve the bankers, corporate retailers, the Pentagon and industrialists. The same legacy which resulted in the successes of the Underground Railroad should guide the struggle of the workers and oppressed in the 21st century.