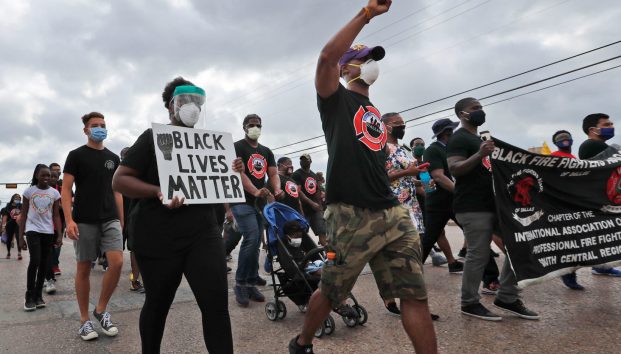 Juneteenth: Over 500 Strikes In The Last Three Weeks

Above photo: Protesters march in a Black Lives Matter demonstration organized by the Dallas Black Firefighters Association on Juneteenth 2020 in Dallas, Friday, June 19, 2020. Juneteenth marks the day in 1865 when federal troops arrived in Galveston, Texas to take control of the state and ensure all enslaved people be freed, more than two years after the Emancipation Proclamation. AP Photo/LM Otero.

Hundreds of Workplaces Likely to Go on Strike Today

Longshoremen are going on strike at 29 ports across the West Coast. The UAW is planning to stop production on all assembly lines for 8 minutes and 46 seconds to honor George Floyd.

The strikes come as workers have walked off the job at over 500 employers in the last 3 weeks alone.

If the size of these strikes last week is any indication, Juneteenth will likely be the largest day of strikes in more than a generation.

In Pittsburgh, Payday Report has learned from NewsGuild activists that the Pittsburgh Post-Gazette is likely to strike for the first time in 1994 over its editors’ racist conduct.

But first, let’s talk about why the Black Lives Matter protests are driving the most massive wave of strikes this nation has likely seen since the end of World War Two.

Payday Report has identified more than 540 wildcat strikes over the last two and half weeks across the United States. (See our Strike Tracker here)

During the previous three months, Payday had identified 260 wildcat strikes, a level of strike activity not seen in decades.

Now with more than 540 strikes in the last two and half weeks, many activists are hoping that the “Strike Wave Curve” is one curve that will not flatten.

On July 31st, enhanced pandemic unemployment insurance benefits of an extra $600 a week are set to expire.

One study by the University of Chicago showed that nearly 2/3rds of workers nationwide would be earning more on enhanced pandemic unemployment benefits than in their current jobs.

In some states, workers can collect benefits if they fear returning for health reasons; allowing many workers to refuse dangerous assignments.

As a result, Senate Republicans are vowing to block the expansion of these benefits as “too generous.” Also, some self-identified “pro-union” Democrats like suburban Pittsburgh Congressman Conor Lamb say they are opposed to extending the benefits because they remove incentives for people to return to low wage work.

Many activists expect that the benefits renewal will be a significant fight, likely leading to even more strikes and protests to renew the benefits that have proven a lifeline to over 40 million unemployed Americans.

See a Strike, Report a Strike on Our New App

We created an easy-to-use tip sheet for folks to enter not just strikes, but organizing drives, protests, and workplace campaigns. (You can use the tip sheet here).

This information is being also studied by academic researchers to help understand the root causes of the most massive worker uprising in decades, so please fill out the tip sheet today.

African-Americans Face Retaliation at Twice the Rate of White Workers

30% of black workers are frontline workers, while only 20% of all white workers are employed in the frontline industries according to an analysis by the Center for Economic and Policy Research.

Not only are African-Americans more likely to work in frontline industries, but they are also twice as likely to face retaliation according to a recent national survey done by the National Employment Law Project.

(For more analysis on this survey, check out Lauren Kaori Gurley’s excellent reporting at Vice.)

Studies show that race is indeed a leading indicator of whether or not someone is likely to support unions. African-Americans are nearly twice as likely to approve of unions as white Americans.

Union organizing experts like Cornell’s Kate Bronfenbrenner say that minorities are less likely to see themselves as the boss and, therefore, under no illusion about whose interest management represents.

“Women and people of color know that they never would have survived without their support networks and community allies,” says Bronfenbrenner. “Nor do they have any reason to trust any employer who says, ‘Stick with me, and someday you will make it to the top,’ because the people who are telling them that are the same white men who are sexually and racially harassing them.”

She says that this ideology of toxic masculinity emphasizes that “there are lots of white men who started out poor just like them who made it all on their own to the very top, and surely they stayed as far away from unions as they could to get there,” says Bronfenbrenner.

(For more, check out my classic 2014 magazine story “The Battle for Chattanooga: Toxic Masculinity & The Anti-Union Campaign at Volkswagen”)

Recently, many on the left have adopted “class reductionist” positions while arguing in essays (such as “Class Rules Everything Around Me” published in the popular Brooklyn-based magazine Jacobin) that the left should focus on class instead of race.

“Class reductionism” rejects “intersectionality”. A Black feminist school of thought that was initially developed to understand by Columbia Law Professor Kimberlé Crenshaw to address the compounding nature of oppression faced by Black women.

“Intersectionality is a lens through which you can see where power comes and collides, where it interlocks and intersects. It’s not simply that there’s a race problem here, a gender problem here, and a class or LBGTQ problem there. Many times that framework erases what happens to people who are subject to all of these things,” said Crenshaw in an interview with Columbia University.

Many activists argue that workers are motivated to fight back due to the experience of Intersectionality, which describes a complex array of separate, but interlocking and often reinforcing systems of oppression based around sex, race, class, gender, disability, and immigration status.

The recent dramatic spike in the strike wave inspired by Black Lives Matter protests discredits theories that class issues should be the primary focus of social movement organizing. The strike surge shows that the intersectionality of issues motivates workers to take action in a broad array of contexts.

Why the Left Fails to Understand African-Americans & the Labor Movement

Claflin University Professor Robert Greene II, an African-American historian of social movements, says that the lack of intersectional analysis on the left ignores the role of African-Americans in driving the agenda.

“I think part of it is a misunderstanding of American labor history. A lot of people ignore, for instance, the role of labor in the Civil Rights Movement–or, vice versa, the critical role of younger, radical African Americans in revitalizing the labor movement in the late 1960s and early 1970s,” says Greene.

“You can tie this to glossing over recent movements–such as Fight for $15–which have noticeable participation, and often leadership, by people of color,” says Greene.

“In short, we too often neatly divide different parts of the history of the American Left into different categories, when in fact, they crossed all the time,” says Greene.

(For more, check out my 2018 Guardian piece “Justice in the factory: how Black Lives Matter breathed new life into unions )

In Pittsburgh,  Payday Report has learned that Pittsburgh NewsGuild is likely to strike soon at the Pittsburgh Post-Gazette.

For more than three years, the union contract at the Pittsburgh Post-Gazette has been expired; thus allowing the union to the strike when they choose; a strike that many expect to come soon.

However, the union resisted striking for years out. Many older Post-Gazette reporters recall how the Pittsburgh Press was closed after the 1994 strike. While many young reporters in a town with few media options fear that strike might mean the end of their careers in journalism.

Things appear to be changing quickly at the Post-Gazette as support builds rapidly for a strike, and many expect one to happen soon.

(For more background, check out African-American CityLab writer Brentin Mock’s piece “The Voices Behind the Clash at the Pittsburgh Post-Gazette”)

Santiago, who won a Pulitzer for his coverage of the Tree of Life Massacre, said he decided to quit the newspaper and take a buyout because he couldn’t give his creative powers to a racist institution.

“I can’t work for a paper that treats their employees like this,” Santiago told the Pittsburgh City Paper’s Ryan Deto. “I don’t see any way to mend the fences.”

Alexis Johnson is staying at the paper for now and suing the Post-Gazette from racial discrimination.

“Precluding Johnson from covering major stories involving race-based protests and demonstrations is a materially adverse employment action because a reasonable newspaper reporter would have been dissuaded from complaining of race discrimination had she known she would have been precluded from the assignment of coverage of a major story,” her lawsuit read.

(For more, check out Tereneh Idia’s “An Open Letter to Alexis Johnson”)

Strike Would Be 1st Newspaper Strike in Pittsburgh Since 1994

The treatment of Johnson and Santiago, as well as the censorship of other reporters, has outraged journalists at the Post-Gazette, who haven’t struck since 1994.

“People are pissed, and they feel like the moment is now,” said one NewsGuild activist, who wished to remain anonymous as the union has instituted a gag order on reporters speaking about the possibility publicly.

At this point, it’s unclear when a potential strike might occur or how long such a strike would last. However, it is clear that support is growing for a strike within the Post-Gazette and that many NewsGuild activists predict a strike will happen soon.