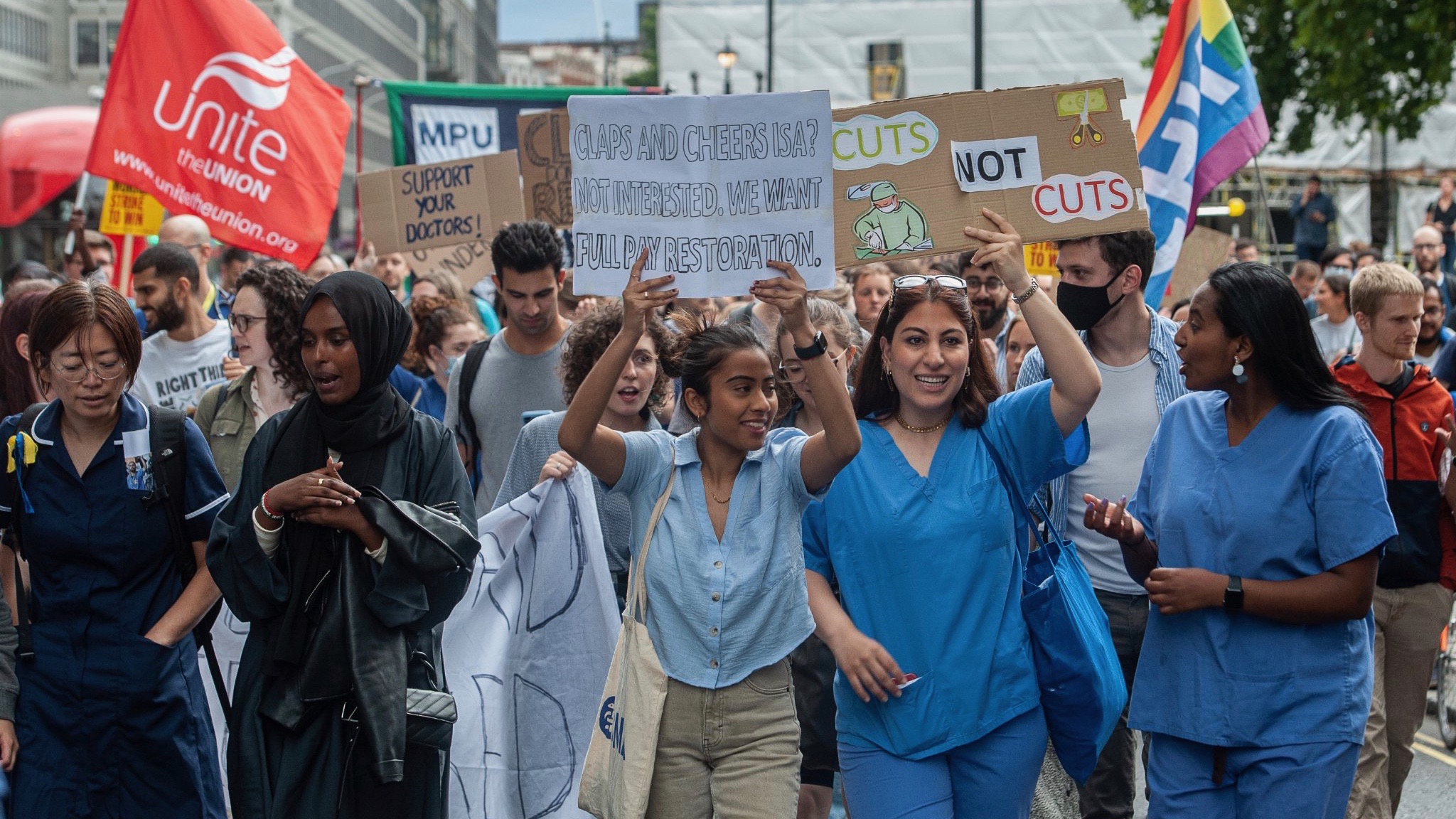 Above Photo: Junior doctors’ protest in London. via Guy Smallman.

And demand a pay rise.

Over the last two decades, the National Health Service (NHS) in the UK has been substantially weakened due to underfunding and understaffing. A good share of its staff, including young doctors, are now on the verge of leaving the NHS due to overwork and lack of decent wages.

NOTE: This is one of the benefits of having a public healthcare system – health professionals have a system to hold accountable for the specifics of the system, such as what they are paid. In the United States, there is NO system and no entity to hold accountable.

On Monday, July 25, junior doctors in London organized a protest march in the city demanding a pay rise. Under the banner of the Doctors Vote campaign, they took out a march from the Department of Health and Social Care Office to Downing Street. The doctors warned of more actions, including strikes, unless their long pending demand for pay restoration is met. Doctors from the British Medical Association (BMA), Doctors’ Association UK, and trade unionists and activists from Unite the union, Unison, Socialist Party, and others also took part in the protest march in solidarity with the junior doctors.

Working class sections across the UK, including medical staff, have been facing an acute cost of living crisis marked by skyrocketing fuel and food prices. Meanwhile, the National Health Service (NHS) has been steadily underfunded for many years. Doctors and other NHS staff including nurses and care workers have been demanding decent wages for a long time and full pay restoration to 2008-2009 levels, prior to the global financial crisis. During the COVID-19 crisis, resource crunch and understaffing stretched the NHS to its limits. Doctors across the country are demanding decent wages at par with the current rate of inflation.

According to reports, doctors’ pay has fallen against the retail price index by as much as 30% since 2008. On July 19, the government announced a pay award of 4.5% to the NHS staff, including senior doctors who are consultants and general practitioners. Most of the NHS staff deemed such a paltry rise in pay insultingly insufficient and threatened to resort to strike action for a decent hike in wages. Junior doctors and medical students are even more agitated as they are excluded from the current package announced by the government and are only entitled to a meager 2% raise as part of a multi-year pay deal agreed to before the COVID-19 crisis.

Following the protests on Monday, the Doctors Association UK said, “would you accept a 30% real terms pay cut over the last 20 years? That is what has been forced down the throat of NHS doctors and it is not good enough. Without better pay and conditions the NHS will keep losing good doctors!”

Following the announcement on wage hike on July 19, BMA junior doctors committee co-chairs Dr. Sarah Hallett and Dr. Mike Kemp stated, “today’s risible pay announcement demonstrates the blatant disregard our politicians have for junior doctors in England. To exclude our members from the 4.5% given to other NHS workers is nothing less than a betrayal of the profession,”

BMA council chair Prof. Philip Banfield accused that “the UK Government has excluded junior doctors in England, even from this year’s paltry offer due to a multi-year agreement made way before we could have anticipated the damage wrought by the pandemic and sky-high inflation, is a disgrace. It exposes their contempt for my already low-paid colleagues who will be rightly furious.”

“The NHS is already facing a precarious future due to chronic under-funding, a backlog of patient care that will take years to clear, and punitive pensions rules driving doctors out of the profession, when the Government should be doing all it can to recruit and retain them,” he added.

Meanwhile, the Health and Social Care select committee report of the UK House of Commons, released on July 25, warned that a grave workforce crisis in the NHS is putting people’s lives at risk. The committee found out that ‘the persistent understaffing of the NHS now poses a serious risk to staff and patient safety’ is a result of decades of cuts and privatization.”

Recently, Prof. Stephen Smith, former chair of the East Kent Hospitals NHS University Foundation Trust, urged the government to charge patients for hospital stay to generate funds for the NHS. The Tory government had already enacted the controversial Health and Care Bill by April 28, 2022 – dubbed by critics as the “NHS Corporate Takeover Bill” – which will further privatize key NHS services and legitimize the participation of private stakeholders in its decision-making bodies. According to reports, the act is likely to be implemented by July 2022, and will break up the NHS into 42 separate integrated care systems (ICS), each of which will have “its own tight budget which will force local cuts.”

On July 25, the Communist Party of Britain (CPB) stated that “supplementary payments in the form of patient charges, regardless of amount or reason, undermine the universality of NHS care and should be firmly opposed.”

“The soul of the NHS lies in its aims. All contribute to its running through general taxation and a contributory scheme of National Insurance. The aim is to treat all citizens, free of charge, regardless of age or condition,” the CPB added.