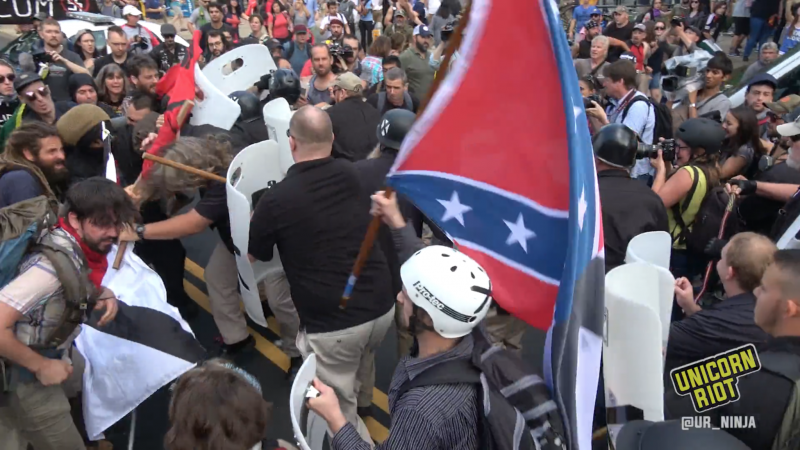 Charlottesville, VA – After nearly three days of deliberation, a federal jury returned their verdict in the civil rights lawsuit filed against organizers of the the deadly August 12, 2017 Unite The Right rally. The plaintiffs in the ‘Sines v. Kessler’ case – 10 people injured and/or traumatized by the car attack and other racist violence the weekend of August 11-12, 2017 – were represented by attorneys with civil rights nonprofit Integrity First For America.

The jury found all the neo-nazi leaders and groups sued in the case were liable for violations of Virginia laws regarding civil conspiracy, racial and ethnic intimidation, hate crimes, and assault and battery. Total damages awarded in the verdict add up to over $26 million.

The jury failed to reach a unanimous verdict on the two main federal counts in the suit, alleging a conspiracy to commit racially motivated violence in violation of the 1871 Ku Klux Klan Act. Plaintiffs’ attorneys say they intend to retry the federal claims in continued litigation.

As the case currently stands after today’s verdict, the constellation of individuals and groups behind the 2017 alt-right movement face serious financial repercussions (many were already financially crushed by pre-trial litigation in this case). Rally organizers Jason Kessler and Eliott Kline (aka Eli Mosley), Robert ‘Azzmador’ Ray with the neo-nazi website Daily Stormer, and racist celebrities Richard Spencer and Christopher Cantwell each owe $700,000 total in damages.

Organizations involved in organizing violence at the rally also owe $1 million each in damages – this includes Vanguard America, Identity Evropa, the League of the South, TWP, and the NSM. While some of these groups – such as Vanguard America, Identity Evropa and TWP – have disbanded, those who served as officers or leaders of organizations may still be liable on an organization’s behalf.

Similar findings regarding damages are expected to be found against various defendants who ‘defaulted’ in the case by not participating in the litigation. This includes Daily Stormer founder Andrew Anglin and his financial entity Moonbase Holdings LLC, the East Coast Knights of the KKK, the Fraternal Order of the Alt-Knights, the Nationalist Front, and neo-nazi Augustus Sol Invictus.

Punitive damages assessed against defendants will reportedly be shared amongst plaintiffs who were awarded compensatory damages, according to Judge Norman Moon.

Compensatory damages awarded to the plaintiffs varied based on the counts presented to the jury. Jurors awarded damages of $0 and $1 to plaintiffs for the Virginia state civil conspiracy claim. Other counts in the verdict returned larger sums in compensatory damages for the plaintiffs, who all testified to being physically or psychologically injured by violence they endured during the torch rally on August 11 and the Unite The Right rally on August 12, 2017.

Plaintiffs Devin Willis and Natalie Romero were both University of Virginia students when they were assaulted and injured at the Friday night torch rally. They were awarded compensatory damages of $623,430 and $250,000, respectively; Romero was also hit in James Fields’ fatal car attack the next day. Both received damages under the count of racial and ethnic intimidation; Romero also received damages for claims of Assault or Battery and Intentional Infliction of Emotional Distress.

Evidence shown at trial largely consisted of the alt-right defendants’ own words – chats, emails, texts, social media posts and podcasts. Both publicly and privately, racist leaders and groups behind the Charlottesville rally repeatedly advocated violence against Jews, people of color, and anti-racist counter-protesters when planning and promoting Unite The Right. Much of the initial evidence in the lawsuit was based on Discord chat groups used to plan the rally, first leaked by Unicorn Riot in 2017.

Contrasted with the voluminous evidence offered against them, the defendants often struggled to make a coherent case. Some defense attorneys were keen to play up the presence of militant antifascists in Charlottesville to justify their clients’ violent conduct. Defendant Christopher Cantwell, representing himself, consistently used his time in court to point out bandanas seen on counter-protesters seen in rally footage. Alt-right figurehead Richard Spencer, also appearing pro se, lectured jurors about concepts like ‘metapolitics’ and compared himself to Jesus Christ in his closing arguments.

Speaking after the verdict, plaintiffs attorneys Roberta Kaplan and Karen Dunn said they were generally pleased with the verdict and looked forward to re-litigating the unresolved federal conspiracy charges.

In a statement, antifascists from Charlottesville applauded “the courage and fortitude of the plaintiffs” and wrote that “while it will be satisfying to see this particular set of Nazis bankrupted, we hope that all those following the case recognize that there is still so much to do to root out fascism and confront a growing Nazi threat in America.”

Defense attorney James Kolenich confirmed to reporters outside court that steps to retrieve financial damages from his clients, such as liens on property, could go into effect immediately.

Watch an overview of testimony in the trial that our reporters gave after closing arguments finished and the case first went to the jury for deliberations:

Unite the Right landmark lawsuit heads to jury in Charlottesville, VA from Unicorn Riot on Vimeo.