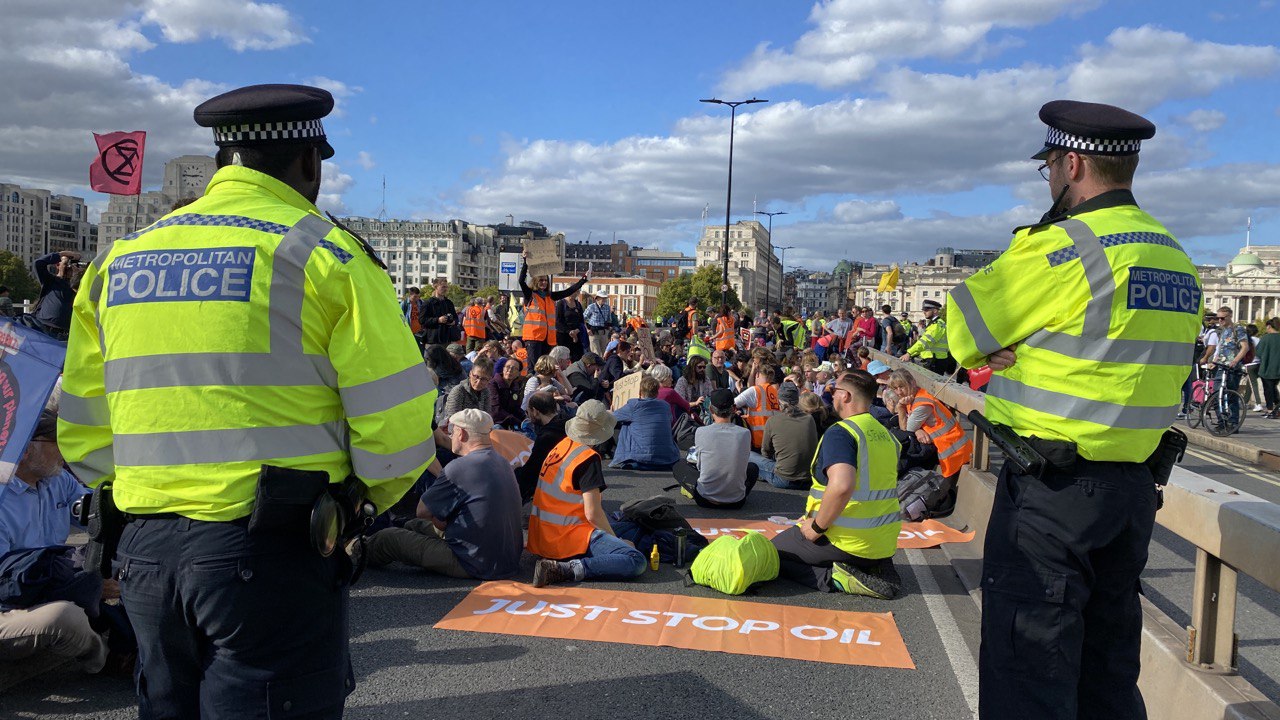 250 people in three separate marches departed from Euston, Paddington and Waterloo at around midday. There was a mass stop and search at Paddington resulting in two arrests as police tried to prevent Just Stop Oil supporters from marching in the road.

Oxford Street, Ludgate Hill and Southampton Row were disrupted, before the groups met at Covent Garden and then went on to block Waterloo Bridge by sitting in the road. Multiple arrests are expected to follow.

Approximately 250 supporters of Just Stop Oil have occupied Waterloo Bridge for the second day in a row to demand an emergency response to the cost of living and climate crisis.#CivilResistance #A22Network #JustStopOil pic.twitter.com/YkEUJJYuoJ

Today’s disruption follows a day of action in which tens of thousands of people turned out across the country to protest the government’s inaction on the cost of living crisis and the climate crisis and show solidarity with striking workers with the We All Want to Just Stop Oil coalition, Enough Is Enough and Don’t Pay campaigns.

“We will continue in civil resistance until this government takes immediate steps to meet our demand to end the cost of living and climate crisis by stopping new oil and gas. We need to start a rapid transformation to a fairer society, decided by ordinary people and paid for by those who are profiting from humanity’s destruction.”

Jo Murphy, 57, a mum of three from Manchester said

“All my life I’ve worked, paid my taxes, been law-abiding , brought my children up to be good people. Meanwhile, our government has lied and cheated and is planning to destroy my children’s future. I cannot sit back and let that happen. No new oil and gas!

“Our government is rewarding the very rich and fossil fuel companies whilst ordinary, working people are worried they won’t be able to heat their homes and feed their children ! It’s disgusting and immoral.”

Gillian Kelly, 78, a former teacher and psychotherapist, from Cumbria said:

“I am taking action with Just Stop Oil because I know – and just about everybody knows now – that in order for our children and grandchildren to have a liveable future we have to stop extracting and burning fossil fuels. Yet the government is continuing to subsidise the fossil fuel industry and hand out scores of licenses for new oil and gas fields. This is not just irresponsible, it is murderously insane.”

This is the moment to come together and resist the genocidal death project. We are not prepared to just watch while everything we love is destroyed. We’re done with begging. We are going to stop new oil whether those in power agree or not. As citizens, as humans, as parents and children we have every right under British law to protect ourselves and those we love. This is the moment, we are the last generation that can solve this. Will you step up and join us?

[1] Just Stop Oil is a coalition of groups working together to demand that the government immediately halt all future licensing and consents for the exploration, development and production of fossil fuels in the UK. More information here: https://juststopoil.org/