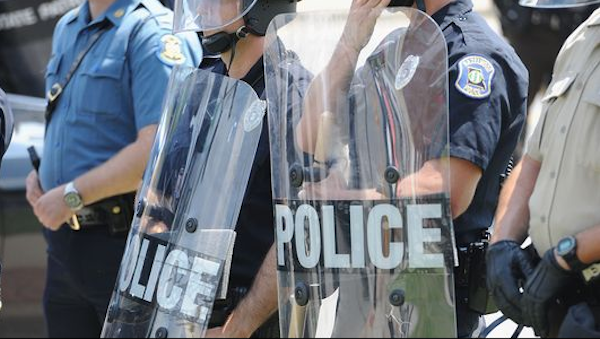 Police officers equipped in riot gear line up during a protest of the shooting death of 18-year-old Michael Brown outside Ferguson police headquarters on Aug. 11, 2014, in Ferguson, Mo. The fatal shooting by police of the unarmed teen in Ferguson has sparked outrage in the community and set off civil unrest including looting and vandalism.(Photo: Michael B. Thomas, Getty Images)

Deadly force, encounters with the mentally ill, use of new technologies, among areas to be reviewed

WASHINGTON —The Justice Department is leading a broad review of police tactics, including the kind of deadly force that prompted recent protests in Missouri and New York, a federal law enforcement official said Tuesday.

The review is being conducted as the department weighs creating a national commission to provide new direction on such controversial issues.

In addition to deadly force, the review is expected to examine law enforcement’s increasing encounters with the mentally ill, the application of emerging technologies such as body cameras, and police agencies’ expanding role in homeland security efforts since 9/11, said the official, who is not authorized to comment publicly and requested anonymity.

The review is slated to be completed early next year while authorities consider establishing a special law enforcement commission similar to a panel created by President Johnson to deal with problems then associated with rising crime.

Rather than violent crime, which has been in decline in much of the country, police are now grappling with persistent incidents involving use of force and their responses to an array of public safety issues, from drug overdoses to their dealings with the mentally ill and the emotionally disturbed.

The call for a broader federal policy review, while not directly tied to any specific incident, grew out of a meeting involving law enforcement advocacy groups and Justice officials, including Attorney General Eric Holder, the official said.

“Nobody has looked at the profession in any holistic way in more than 50 years,” the official said.

Earlier this week, Holder announced that federal authorities were opening an inquiry into last week’s shooting death of a Missouri teenager by local police. Separately, Justice has been monitoring a local investigation in New York into a 43-year-old man’s death after being subdued by local police last month.

Both incidents have sparked volatile local reactions. The most tense are playing out in the suburbs of St. Louis, where for two nights police have clashed with demonstrators protesting the death of Michael Brown, who was fatally shot Saturday in an altercation with police.

“Aggressively pursuing investigations such as this is critical for preserving trust between law enforcement and the communities they serve,” Holder said this week, announcing the FBI’s deployment to the Brown shooting death.

The International Association of Chiefs of Police, the nation’s largest group of local law enforcement officials, has long advocated for the revival of the Johnson administration commission to provide needed direction to an institution whose responsibilities have expanded markedly in the past half-century.

In 2010, then-IACP president Michael Carroll, while supporting a congressional push for such a panel, said police were “confronting a vast array of new challenges and demands that would have seemed unimaginable just a short time ago.” Among those demands, he cited increasing police involvement in immigration matters, overburdened court systems and a “continuing need to ensure the protection of (citizens’) civil rights and civil liberties.”

University of Pittsburgh law professor David Harris, who has written extensively on law enforcement matters, said a new commission could offer law enforcement “empirical evidence for a better way to do business.”

“There is no reason why we can’t and shouldn’t be able to learn from those who are doing things better to create the best practices for everybody,” Harris said.