Above photo: Israelis and Palestinians protest in Jerusalem against the killing of Iyad Halak by Israeli Border Police as well as the killing of George Floyd by Minneapolis police, May 30, 2020. Oren Ziv.

Israelis and Palestinians take to the streets to protest police violence, drawing parallels with the killing of George Floyd in Minneapolis.

Hundreds of Israelis and Palestinians demonstrated Saturday evening in Jerusalem and Tel Aviv against the killing of Iyad Hallak, a Palestinian man with autism who was shot dead by police officers in Jerusalem’s Old City.

Hallak, 32, was on his way to the special education school he attended and worked at near Lion’s Gate when Border Police officers began pursuing him, claiming he had been holding a weapon. Hallak reportedly fled and hid behind a nearby dumpster, where the police officers shot and killed him. No weapon was found at the scene of his death.

Both officers were detained in the wake of the incident; one was released under restrictive conditions, while the other is under house arrest.

In Tel Aviv, over 200 people protested outside the city’s police headquarters while over 150 left-wing activists, including a dozen Palestinians, marched on Jerusalem’s King George Street. The demonstrators held signs that read “Palestinian Lives Matter” and “Justice for Iyad, Justice for George,” in reference to George Floyd, an unarmed black man who was killed last week in Minneapolis, Minnesota, after a white policer officer pinned him to the ground by his neck. Floyd’s death has sparked mass demonstrations in cities across the United States. 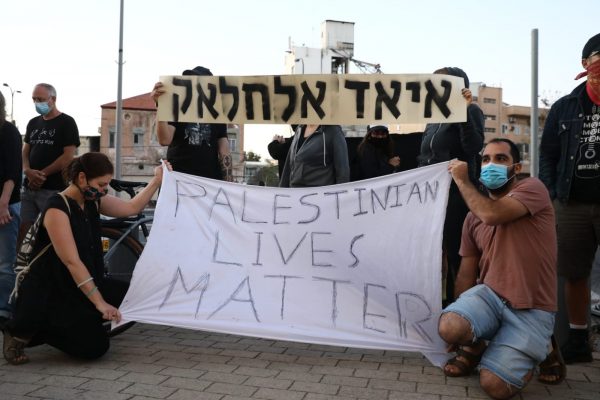 Israeli protesters demonstrate outside the Tel Aviv police headquarters against the killing of Iyad Hallak as well as increased police brutality against African asylum seekers in south Tel Aviv, May 30, 2020. (Oren Ziv)

“Police violence in East Jerusalem is policy, just like the policy against black people in the U.S.,” said Shahaf Weisbein, one of the organizers of the Jerusalem protest. “Police violence and the policies of occupation against the Palestinians are a sad routine. It is time to end the occupation, and for justice for all victims of police violence everywhere.”

Laura Wharton, a Jerusalem City Council member on behalf of Meretz, told the demonstrators: “We know each other here, and unfortunately this is neither the first nor the last time there will be police violence. This was a terrible incident, and we cannot make peace with either the violence or the sense that there is a superior race that thinks it can do anything it wants, including opening fire.”

The violence in south Tel Aviv came just days after newly-appointed Public Security Minister Amir Ohana toured south Tel Aviv on his first day on the job, where he met with far-right activists who demand the deportation of African asylum seekers from Israel. In the days following, the police reportedly increased its activities in the neighborhood of Neve Sha’anan against asylum seeker-owned businesses. On the eve of the Shavuot holiday, following the violent arrests, Ohana once again visited south Tel Aviv and backed the police. In a Facebook post, he wrote that anyone who attacks police officers will bear the consequences.

Ohana expressed regret following Hallak’s death, saying that the fate of the officers in question will be determined only following an investigation.

A number of Israeli MKs condemned Hallak’s killing, likening it to what occurred in Minneapolis. MK Aida Touma-Sliman (Joint List) said “For all those who are outraged about the murder in the United States, look closely — an entire nation is suffocating under occupation without being able to breathe.”

“Minneapolis is here,” said MK Ahmad Tibi (Joint List). “Only yesterday did Minister Ohana incite the police to shoot those who ‘attack officers,’ and the officers have long ago understood the message.”

A version of this article was first published in Hebrew on Local Call. Read it here.

Oren Ziv is a photojournalist, a founding member of the Activestills photography collective, and a staff writer for Local Call. Since 2003, he has been documenting a range of social and political issues in Israel and the occupied Palestinian territories with an emphasis on activist communities and their struggles. His reportage has focused on the popular protests against the wall and settlements, affordable housing and other socio-economic issues, anti-racism and discrimination struggles, and the struggle to free animals.