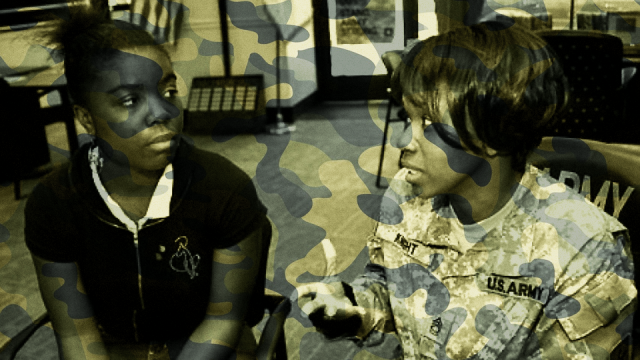 Above is a clip from a Disney Cartoon by Disney Junior that shows a drone character, Shutterbug, from a music video about Agent Oso. The drone character spies on youth and youth characters are seemingly put in the bulls eye of the drone.

As a journalist and researcher, I’ve spent the last several years investigating the expanding network of links between public education and the U.S. military. With my colleague Scott Harding, I’ve also been researching the grassroots response to this phenomenon: the counter-recruitment movement.

Activists along with outspoken scholars and education writers like Henry Giroux, Kathy Barker and Amy Hagopian have all questioned the propriety of placing recruiters and other types of military personnel into close contact with children, which the United Nations defines as anyone under the age of 18. In a 2012 resolution, the American Public Health Association called for the demilitarization of schools, citing the creepy way that recruiters, acting as little more than trained salesmen, ingratiate themselves to win the trust of teens.

Over the past ten years, the military presence in schools has also been condemned by the New York Civil Liberties Union, Rutgers School of Law and Child Soldiers International, among other organizations. Reading trade publications like the Army’s Recruiter Journal, I’ve become accustomed to seeing extreme examples of military collaboration with public schools. Still, I was surprised when I read an edweek.org article last month about high school students in Dayton, Ohio, who are learning how to solve military problems using unmanned aerial vehicles – more commonly called drones.

What’s the Matter with Ohio?

It’s tempting when reading such an account to explain it in terms of regional differences. Ohio is a conservative state, after all. “The territory is basically pro-military,” and the political climate in the Buckeye State “present[s] few barriers to recruiting,” according to a 2013 assessment by the Navy’s Ohio Recruiting District.

Wright-Patterson Air Force Base, located in Dayton, is also home to the Air Force Institute of Technology, a graduate school that has been involved in “pioneering” research on drone technology. According to an estimate by the Association for Unmanned Vehicles Systems International, by 2025 the drone industry is expected to create 2,700 jobs in the state and contribute $82 billion to the nation’s economy.

Could these factors make Dayton a more likely testing ground for high school-level “drone studies” than, say, Berkeley, California? Probably. But this kind of “only in Ohio” thinking obscures the reality of a larger national trend towards the militarization of K-12 Science, Technology, Engineering and Math (STEM) education.

Along with politicians, business and industry, military officials have been ringing the alarm bells for years about the declining state of STEM education. In its STEM Education and Outreach Strategic Plan for 2010-14, the Pentagon’s STEM Development office cited a “U.S. public education system” that was “challenged” by “outdated, underfunded, and poorly maintained facilities for science study.”

To address this deficiency, the military has used its vast resources to develop a sort of shadow education system where tens of millions of dollars get spent every year on programs to stimulate children’s enthusiasm for the STEM fields. Educational Outreach (EO) offices and STEM coordinators exist on almost every major military installation.

In Dayton alone, between 2003 and 2013, Wright-Patt’s EO office provided more than $7 million in free programming to 200,000 local students. On average, base personnel spent 1,800 hours per month volunteering in Dayton public schools. Despite their lack of teaching credentials, airmen have even taught a “Principles of Engineering” elective course for several semesters at the Dayton Regional STEM School, according to an article in Skywriter, Wright-Patt’s weekly newspaper,

“The future of Air Force recruiting,” reads a June 2014 Air Force Recruiting Snapshot, “relies upon achieving STEM capabilities and goals.” That means more airmen coming to more classrooms to show more kids how to build bottle rockets. But while the armed forces have a clear stake in building a STEM-savvy workforce, a brief survey of some of the most popular types of military-sponsored STEM programs – in Dayton and across the U.S. – indicates that the military aims not just to stimulate general interest in scientific topics.

Rather, it wants children to get excited about militarized STEM subjects like robotics and drones. And the ultimate intent, although not always clearly stated, is to promote STEM careers in the military.

By far one of the biggest players on the STEM education scene is the nonprofit FIRST (For Inspiration and Recognition of Science and Technology), which oversees large-scale, team-based robotics competitions for students in grades K-12. During the 2013-2014 school year, more than 350,000 students participated; together, they represented 32,600 teams from around the world working on 28,800 robots.

While FIRST takes care of things on the marketing end and disburses scholarships to top contenders, team coaches and other forms of support come from dozens of sponsoring organizations. The most common sponsors are businesses and institutions of higher education, but the Air Force also sponsors regional FIRST activities in a number of states including New York, Oklahoma and Ohio.

Seeking to reach their “target demographic” – students in grades 9-12 – top Air Force brass showed up in April to the FIRST Robotics Competition Championship in St. Louis. Students at this level have only six weeks to build a robot from a common kit of parts provided by FIRST. Their robots must respond to a hypothetical “challenge” that FIRST poses at the beginning of each school year. (For 2013-2014, the challenge involved a natural disaster.)

More than 2,500 teams advanced through state, regional and national rankings by beating their peers’ robots in a 2.5 minute “robot round” face-off. According to Tech. Sgt. Daniel Hopper, who came to recruit at the St. Louis event, is “was a great venue to discuss both enlisted and officer opportunities to some of our nation’s most intellectual kids.” Brig. Gen. John Horner, the top recruiter for the entire Air Force, told a reporter from the recruiters publication Behind the Badge that the event “was a slam dunk” and “generated more Air Force awareness that targeted the right demographic for our department than any other event previously worked.”

Get ‘Em While They’re Young

Surveys of youth interest in the military consistently show that by age 16 or 17, young people’s minds are made up. For that reason,according to a group of military sociologists from the universities of Maryland and Michigan, the recruiting community must “explore ways to make military service attractive as early as the eighth grade, even though eighth graders are not yet eligible to enlist.” Some military-sponsored STEM programs seem to be addressing this problem.

FIRST Lego League (FLL), a partnership between the nonprofit and the iconic manufacturer of plastic blocks, is geared towards students in grades 4-8; the format is similar to FIRST’s programming in high schools, but instead of building autonomous robots from a 150-pound kit of materials, these younger kids use Lego Mindstorms technologies.

Wright-Patt’s Air Force Research Laboratory has been the “lead organization” for the Ohio FLL since 2001, and the base is involved “from A-Z every year” with the Ohio State Championship, according to a Skywriter article. During this year’s awards ceremony, students passed through a gauntlet of about 10 Wright-Patt personnel, including some described by Skywriter as “key senior leaders” at the base.

Why would “key senior leaders” would be promoting “Air Force awareness” among elementary and middle-school students? In an email to Daniel Andrews, I received no response to this question. A clue, however, comes to us from the Air Force Recruiting Service’s new“Recruiter After Next Initiative” – a new recruiting protocol that includes a number of changes in strategy, one of which concerns “assisting future recruiters” by reaching out today to “a younger generation that’s not yet ready to join.” The logic: exposure to Air Force personnel in a fun and informal environment might just turn today’s 5th grader into tomorrow’s airman.

Since the time of the Vietnam War, there has been debate about how universities’ over-reliance on government funding leads to academic specialization in military-oriented fields. It now appears that we need to be concerned about a similar process unfolding at the K-12 level, where nonprofit STEM education entities are increasingly opting to partner with the military.

To address this situation, FIRST must fully disclose that their military sponsors have an interest in recruiting children for future military careers. And when it comes to brick-and-mortar schools like Dayton Regional STEM, the practice of allowing military personnel to spend entire semesters in a classroom of public school students isn’t only inappropriate and underhanded, but contributes to the deskilling of the teaching profession. To atone for these sins, the school would do well to introduce a new elective for the upcoming school year: “Ethical Uses of Technology.”

Check out the National Network Opposing the Militarization of Youth, which will add content this summer about military involvement in STEM education – and ways to resist it.