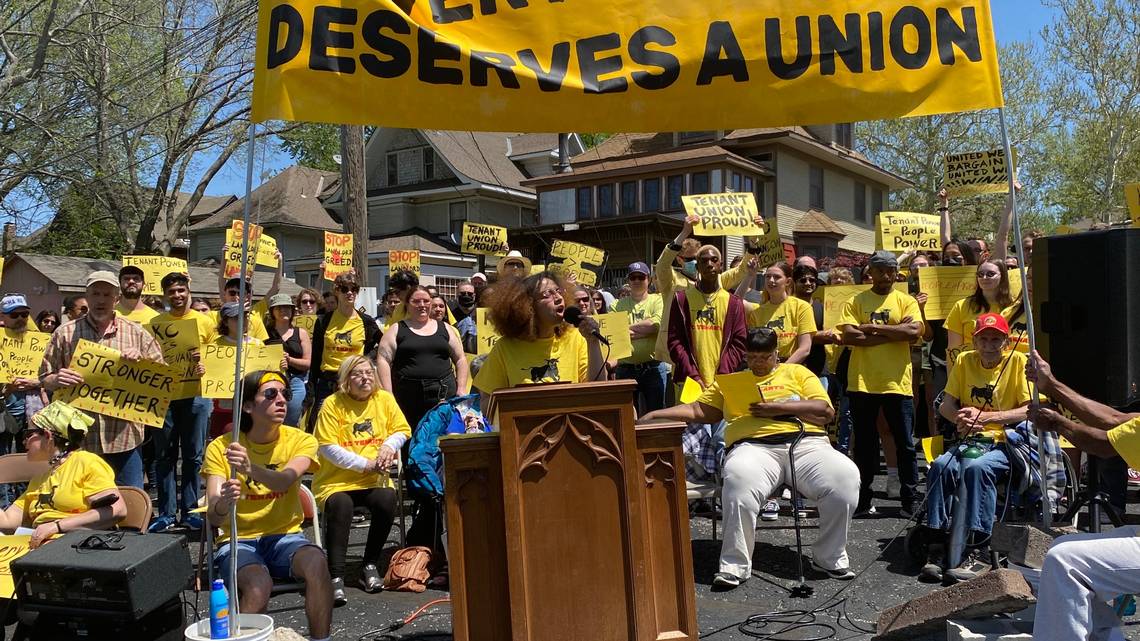 Above Photo: KC Tenants founded by Shawnee Mission East graduate Tara Raghuveer, 29, and three other women, finds success by building a culture of radical solidarity and building power for tenants for the long haul. Tammy Ljungblad.

Kansas City, Kansas – Pat Lucas received the notification last August: She would have to vacate the Armour Flats building in the 3400 block of Holmes Street in Kansas City — her home for more than 17 years — by November.

The management company was going to renovate the property, causing her rent to shoot up, from a little over $500 a month to more than $1,000. She was priced out and had to move.

Lucas shared her story Saturday as KC Tenants, a local organization advocating for housing rights, held a rally to announce it was creating a citywide tenant’s union.

The organization will work with every local neighborhood association with a goal of getting 10,000 union members.

KC Tenants has seen success since its formation, getting the first ever tenant’s bill of rights passed by Kansas City’s City Council in December 2019 and two years later, a guaranteed right to counsel for anyone being sued for eviction.

This latest effort is aimed at helping as many Kansas City residents as possible.

Lucas said that a union would help give residents more power.

Six speakers, all leaders with KC Tenants, shared their experiences about landlords at various Kansas City apartment complexes during the rally held near Trinity United Methodist Church in Hyde Park.

Phillip Washington was kicked out of his residence earlier this year after falling behind on rent. His eviction came during one of the snowstorms that hit the area. He had nowhere to go and has been homeless since.

“They took my dogs,” Washington said. “I’m homeless, but I say it with my chest up. I know it’s not my fault and I know I’m not alone.”

Several speakers gave examples of the living conditions they’ve had to endure — and a lack of response from landlords. No heat. No air conditioning. Sometimes the running water doesn’t work. And landlords who rarely addressed the problems.

Maya Neal, another speaker, said she found a dead bird in a closet of one of the places she lived in Kansas City. The bird had entered through a hole in the wall.

She said the organization is just getting started.

“Today is the beginning of a new day in KC Tenants,” she said. “It is an awakening.”

“A union brings our people together to win. A win where everyone has safe, accessible, truly permanent affordable housing.”