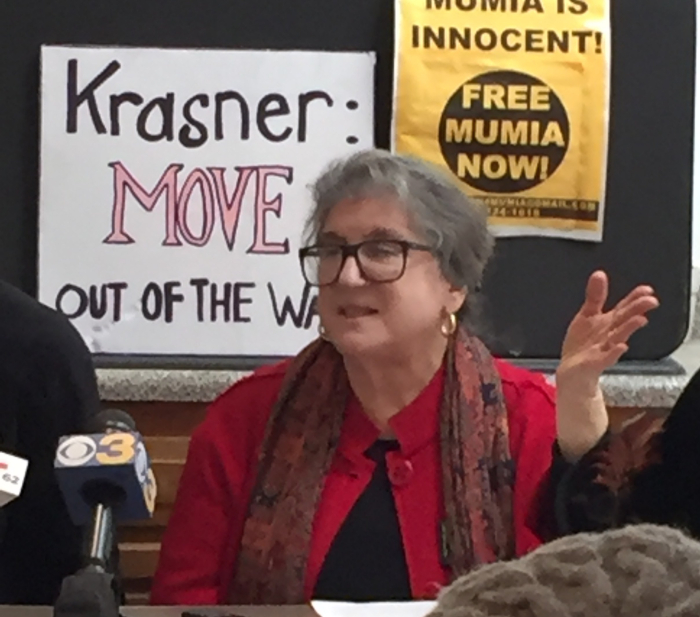 Keep The Pressure On DA Krasner To Free Mumia!

We were very disappointed when Philadelphia District Attorney Larry Krasner announced on January 25 that he would appeal the December 27, 2018, decision by Common Pleas Court Judge Tucker to grant new appellant rights to political prisoner and journalist Mumia Abu-Jamal.

The appeal pushes back Abu-Jamal’s access to new hearings over injustices in his 37-year-long case, but as the article below describes, it will not stop the fight for his freedom. KZ

On Dec. 28, one day after the decision by Judge Leon Tucker opening the door to further appeals by Mumia Abu-Jamal, employees of the Philadelphia District Attorney’s office “found” six boxes in a storage space, while allegedly looking for office furniture. Five of the six boxes are marked with the name McCann, the name of a former head of the Philadelphia District Attorney’s Office Homicide Unit. Five of the boxes were also marked with Mumia’s name. This discovery was revealed to the public more than a week later in press reports.

At a Jan. 15 news conference in Philadelphia, attorney Rachel Wolkenstein, a supporter of Mumia and member of a previous legal team for Mumia, said: “What these missing boxes represent is confirmation of what we’ve known for decades: There’s hidden, exculpatory evidence in Mumia’s case, and that is evidence that Mumia’s guilt was intentionally manufactured by the police and prosecution, and the truth of his innocence was suppressed.”

Wolkenstein told the press that “every single witness in the case was coerced and encouraged to lie. … There is police and prosecutorial misconduct throughout this case.” She pointed out that if Krasner chooses to appeal Tucker’s decision, Mumia would be tied up for years awaiting justice.

A history of suppressing evidence

The Philadelphia District Attorney’s office has a history of suppressing evidence and is known for the infamous training video that taught Assistant DAs how to keep Blacks off juries. The sudden release of the boxes demonstrated the systematic denial of due process in Mumia’s case. Mumia was denied justice at every turn, with no right to self-representation and no jury of his peers.

In the case of Jimmy Dennis, who spent 25 years in prison for a murder he did not commit, Philadelphia DAs withheld information about a witness who identified others as the killers, failed to reveal the existence of a receipt that confirmed Dennis’ alibi, and failed to provide the statement of a witness who said she recognized the shooter from high school. Even after a federal court decision in Dennis’ favor, the DA’s office continued to drag its feet, delaying his release for years.

The notion that the “finding” of boxes of material from Mumia’s case is the result of their having been “misplaced” seems particularly suspicious in light of earlier efforts to tamper or withhold evidence in the case. The ballistics evidence was very questionable, for example. The bullet that police recovered was too damaged to be matched to Mumia’s gun. A forensics report from the medical examiner noted that the bullet was a .44 caliber—but Mumia’s pistol was a .38 caliber.

Similarly, crime scene photos taken by photojournalist Pedro Polokoff showed cops holding guns taken in evidence with their bare hands and showed the hat of deceased Officer Daniel Faulkner placed on top of Mumia’s brother Billy Cook’s Volkswagen, though it appears on the sidewalk in the official police photos.

Mumia has been in the sights of law enforcement, from local cops to the FBI, for his youthful role in the Black Panther Party, and for his later role as an award-winning journalist. As a reporter, Mumia covered the 1978 Philadelphia police attack on the MOVE house in the Powelton Village neighborhood, after a 50-day siege in which no one was allowed in or out of the property. Police bulldozed the house almost immediately after the standoff was over, destroying any evidence of police misconduct.

During a press conference following the Powelton Village assault, then Mayor Frank Rizzo singled out Mumia’s “new breed” of journalism as responsible for the death of Police Officer James Ramp, saying that Mumia would be “held accountable and responsible.” The MOVE 9 were convicted and imprisoned for the death of Ramp despite his having been killed by “friendly” police fire.

The petitions were handed to a Krasner assistant as the DA passed through the lobby. Krasner, however, did not stop to speak with activists, some of whom had supported his campaign for the office. District Attorney’s Office Director of Communications Ben Waxman, a former Occupy Philadelphia activist, spoke briefly with activists, but refused to address any specifics of the case as “above [his] pay grade.”

Speaking at the Philadelphia press conference on Jan. 15, Pam Africa, a leading organizer for Mumia’s defense, demanded Mumia’s freedom, saying, “After almost four decades in prison suffering from cirrhosis of the liver, Hepatitis C and related ailments, years of court delays will be nothing less than a death sentence and a denial of justice for Mumia. The evidence is here! Our job is to stop the conspiracy to torture and murder Mumia. After 37 years in prison for a crime he didn’t commit, we are demanding that the charges be dismissed and he should be freed.”

Earlier, at a Jan. 12 meeting at the People’s Forum in New York City, Pam Africa said that the recent court victory and the “discovery” of the boxes must be credited to the “power of the people.” She went on to point out ,“We must organize as if the death warrant was signed, ’cause if it was left up to them, Mumia would’ve been dead a long time ago. There’s a whole lot of other boxes that’s missing. Now that the appeal is in, the following day they find the boxes?”

Africa continued, “There’s still a lot of work that needs to be done. Radio stations, churches, subways, communities—letting people know what is going on ’cause every minute, second, Mumia’s closer to death. We’re doing what they said we’d never be able to do, and that’s bring Mumia home.”

Mumia also addressed the New York meeting, via telephone. Moderator Robyn Spencer asked him, “How are you feeling now with the potential of the doors opening?” Mumia responded, “This is probably the first time I’ve been before a state judge in the Commonwealth of Pennsylvania who was not paid by the FOP, and that means something.”

Spencer then asked, “What can we take away from this [meeting]?” Mumia answered, “Resistance, organizing, movements, work. To quote John Africa: ‘When you’re committed to doing that which is right, the power of righteousness will never betray you” (quoted in the New York Amsterdam News, Jan. 17, 2019).

Supporters of Mumia are projecting a mass action in Philadelphia on April 20 to demand his release. That will be followed by a student walkout on Mumia’s birthday, April 24.

We must keep the pressure on the “progressive” District Attorney Larry Krasner. Krasner, formerly a defense attorney, was known in activist circles for defending protesters in court. Those credentials inspired liberal and left activists,  including the local Democratic Socialists of America, to get active in his campaign. In office, Krasner has offered up some reforms and promised to review wrongful convictions. However, in Mumia’s case, it appears that Krasner has hesitated because of his relations with the Fraternal Order of Police.

Now is the time to re-energize the fight to free Mumia— a man who was railroaded to death row solely for his political beliefs and actions; a man who was innocent of the charges against him but was framed-up because he dared to tell the truth about the corrupt and racist police and the court system.

We cannot rely on politicians or their courts to win a victory. To win we need to build a powerful, united movement to free Mumia. We need to reach out to and to energize new forces in the movement—above all in the Black community, and in the labor movement, among students, and among all of the oppressed. It was the mass struggle in the streets by supporters of justice that stopped previous attempts to execute Mumia.

For decades the working class and its organizations have been under attack. Our unions have been decimated. Hard-won civil rights have been destroyed.  The left and the Black liberation movement continue to suffer the aftereffects of COINTELPRO. The national security state has expanded and spying is rampant. The incarceration of radicals like Mumia, the MOVE 9, Leonard Peltier, and the almost two-dozen former Black Panther Party members who remain in America’s prisons points to the fundamental injustice of the system.