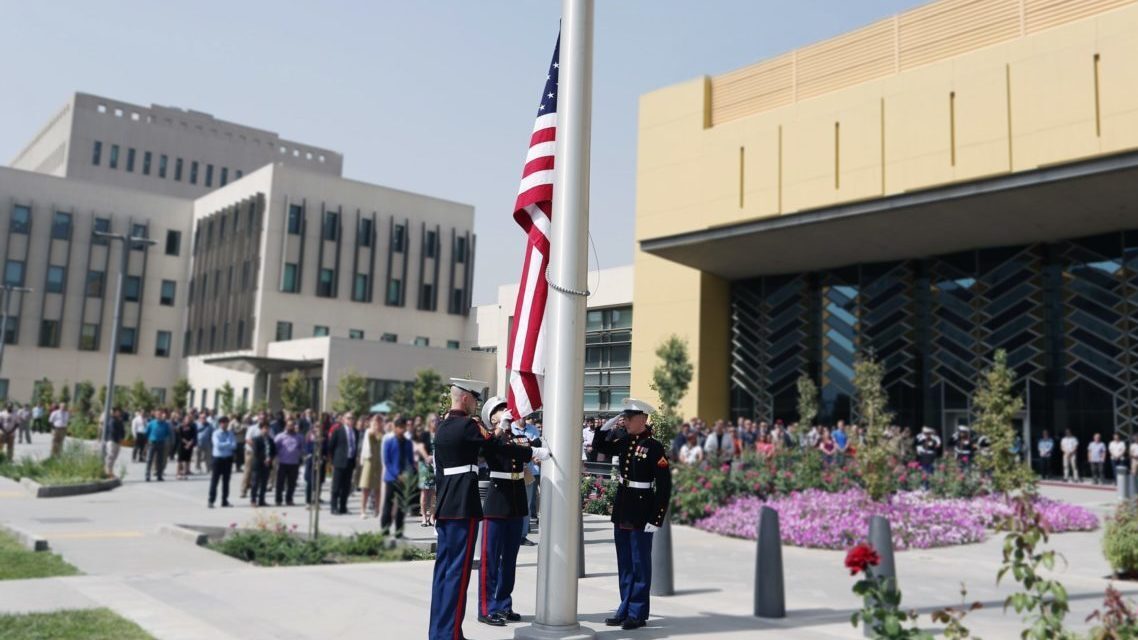 Keep The US Embassy In Kabul Open

Above photo: U.S. Embassy compound in Kabul, Afghanistan. An internal State Dept. memo says it is the largest U.S. embassy in the world. U.S. Department of State.

Don’t Take Revenge on the People of Afghanistan.

If the U.S. really cares for the people of Afghanistan, it should keep the U.S. Embassy in Kabul open.

I was on the small U.S. Department of State team that reopened the U.S. Embassy in Kabul in December 2001 and strongly feel that if the U.S. really cares for the people of Afghanistan, it should keep the U.S. Embassy open.

History reveals that generally when U.S. military strategies don’t work such as in Cuba (1959), Viet Nam (1975), Nicaragua (1979 and 2018), Iran (1979) and North Korea (1953), the U.S. closes embassies and wrecks havoc through brutal sanctions on the economies of the countries to have some sort of soul-soothing revenge for the politicians that put the U.S. in conflict with the countries.

I have no doubt that U.S. discussions with Taliban representatives continue in Doha, that U.S. Embassy officials are in contact with senior Taliban from the Kabul International Airport and that U.S. Department of State officials in Washington are in touch with senior Taliban leaders.  In fact the U.S. government no longer considers the Ashraf Ghani government to be the government of Afghanistan, nor a government in exile.  On August 16, 2021, State Department spokesperson Ned Price said, “The U.S could recognize the Taliban as the governors of Afghanistan provided they respect human rights and have women in their government,” however, official recognition by the U.S. or other NATO countries of the Taliban and the Islamic Emirate of Afghanistan as the government of Afghanistan has not occurred. These contacts should continue through an open U.S. Embassy.

But, the economic revenge on Afghanistan from the U.S. has begun. The U.S. has frozen $9.5 billion in Afghan national treasury funds that were placed in the U.S. by previous administrations.  Additionally, the International Monetary Fund (IMF) has suspended the August 23 delivery of $370 million as a part of the global response to the economic crisis in Afghanistan.

The U.S. should make funds available to the new de-facto government since the elected government fled the country and government employees who are remaining on the job need to be paid.  The Taliban has reportedly been much better about paying government workers in the areas it held than the former government was in paying national military and police.  Without financial assistance which has been a hallmark of the U.S. and international community propping up the economy of Afghanistan, the people of the country will suffer greatly.  Will the Taliban be more corrupt than the U.S. propped up governments it supported for 20 years?

Making U.S. funding contingent on the destruction of the poppy fields of Southern Afghanistan, something the U.S. was unable to do for 20 years, and a project that only the Taliban can do as they control the poppy fields and the farmers that grow the poppies, could be a stipulation that should be pursued, if the U.S. wants to reduce if not eliminate the heroin coming from Afghanistan which reportedly has funded the Taliban’s military and administration in the provinces. Providing a substitute crop that would increase food supply for the country and pay the farmer what they were receiving for growing the poppies would be a win for the world that is flooded with heroin coming from Afghanistan.

In support of continuing programs in Afghanistan,  is the February 29, 2020 agreement between the U.S. government negotiated by the Trump administration states in Part 3, paragraph 3, “The United States will seek economic cooperation for reconstruction with the new post-settlement Afghan Islamic government as determined by the intra-Afghan dialogue and negotiations, and will not intervene in its internal affairs. Of course, the U.S. can say that there was never intra-Afghan dialogue and negotiations that ended in a post settlement government, but as events on the ground played out, the U.S. and the international community is left with the de-facto government that it can either ignore, retaliate against or work with on some levels.

Part 3, paragraph 2 of the agreement states that relations between the United States and the new post-settlement Afghan Islamic government as determined by the intra-Afghan dialogue and negotiations will be positive.

Assuming the U.S. intends to uphold all parts of the Trump administration agreement with the Taliban, Part 3, Paragraph 3 of the agreement should preclude U.S. retaliation through CIA-sponsored militias against the indigenous Taliban force that waged an insurgent guerrilla war against the presence of the U.S. in its country.  Let’s hope that other militia forces belonging to the warlords and former government officials do not again fight as they did after the departure of the Soviet Union from Afghanistan in 1989 that caused incredible suffering to the people of Afghanistan and massive damage to the city of Kabul. Afghanistan deserves decades of peace after decades of violence.

For its part of the agreement, in a five-paragraph description of its obligations in the agreement’s Part 2, the Taliban agreed to “prevent any group or individual, including al-Qa’ida, from using the soil of Afghanistan to threaten the security of the United states and its allies.”  Within the five paragraphs, the Taliban states that it will “not cooperate with groups or individuals threatening the security of the United States and its allies,” including preventing them from recruiting, training, and fundraising, not hosting them, nor providing visas, passports, travel permits or other legal documents and dealing with those seeking asylum or residence in Afghanistan according to international migration law and the commitments of this agreement, so that such persons do not pose a threat to the security of the Untied States and its allies.

As a key part of the agreement, in Part 1, the U.S. agrees to work to remove members of the Taliban from United Nations sanctions by May 29, 2020.  The U.N. monitoring group completed a 27 page report on the Taliban on May 27 and submitted it to the U.N. Security Council.

This time in the debris of the U.S. strategy that did not work in Afghanistan, for the future of the people of Afghanistan that the U.S. has maintained that it wants to help,  I strong urge the U.S. government to keep the U.S. Embassy open so dialogue with the Taliban that has been occurring for the past eighteen months in Doha can continue in Kabul to ensure that important educational and health programs that benefit the people of Afghanistan can remain and that the Embassy can continue to process visas for those Afghans who have worked for the U.S. government and facilitate their departure from the country without interference from the Taliban.

Without an Embassy in Kabul, none of these can happen.

This is the letter I sent to Secretary of State Blinken requesting that the U.S. Embassy stay open.

US Department of State

I was a U.S. diplomat for sixteen years and served in U.S. Embassies in Nicaragua, Grenada, Somalia, Uzbekistan, Kyrgyzstan, Sierra Leone, Micronesia, Afghanistan and Mongolia.  I am also a retired U.S. Army Colonel and served 29 years in the U.S. Army/Army Reserves.

I was on the small State Department team that reopened the U.S. Embassy in Kabul, Afghanistan in December 2001 and remained in Kabul for the first five months of 2002.  I have been back to Afghanistan many times in the twenty years of U.S. involvement in the country.

I also was the Charge d’Affaires in May 1997 when due to a coup against the government of Sierra Leone, we had to close the U.S. Embassy in Freetown, Sierra Leone and evacuate 2500 persons from the Embassy family, Sierra Leone government officials, diplomats from other countries and citizens we felt would be in danger from the coup makers.  I know well the challenges of the political issues and security decisions that come into play in the determination of whether to close an Embassy, the symbol of U.S. interests in a country.

With these issues  in mind, I appeal to you to keep the U.S. Embassy in Kabul open.

I hope the United States sincerely wishes to assist the people of Afghanistan with humanitarian aid for the internally displaced within the country, as well as long-term projects in health, education and infrastructure.  To assist Afghans, the U.S. Embassy must remain open.

Taliban pronouncements of amnesty for government workers and those who have worked with the U.S. are welcome and, of course, will have to be monitored.

A part of the small  “leverage”  the U.S. might have with the new government would be through the presence of a U.S. Embassy.   Other countries, including China, Russia and Pakistan, have not closed their embassies.  The lack of a U.S. Embassy would be seen very poorly by the people of Afghanistan.

Over a period of eighteen months, the U.S. negotiated with the Taliban a withdrawal of U.S. military.  The U.S. negotiating team of State, CIA and Defense officials has had extensive discussions with senior leadership of the Taliban.  The Taliban officials are now well-known to the U.S.  Securing an agreement from these officials that the U.S. Embassy compound and U.S. agencies facilities will not be damaged or personnel injured by Taliban forces should be obtainable.

As a bit of history you may not be aware of, In the twelve years the U.S. Embassy was closed from 1989 until 2001 and during the five years the Taliban controlled Kabul from 1996-2001, the Taliban did not attempt to enter the Embassy properties.  The only damage done to the Embassy during that 12-year period was from the rockets of warlords firing over Kabul and inadvertently hitting the Embassy.  The small, local Embassy staff that protected the Embassy compound during that period were very courageous.

I strongly urge you to keep the U.S. Embassy in Kabul open.