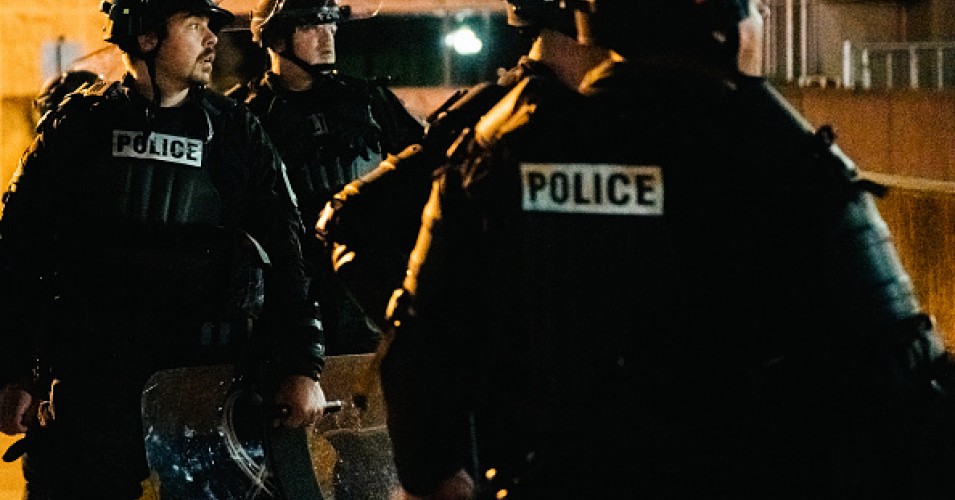 Above photo: Police officers stand guard inside of a fenced area that surrounds several government buildings on August 27, 2020 in Kenosha, Wisconsin. Wisconsin Gov. Tony Evers approved a request for an additional 500 National Guard troops to be deployed into Wisconsin on August 26. Many arrests have been made with the additional presence of law enforcement. Brandon Bell/Getty Images.

When traveling from out of state with an AR-15 is not treated as a crime, but “filling up gas cans for your food truck” leads to immediate arrest.

Soon after their Wednesday arrival in Kenosha, Wisconsin, eight volunteers from Seattle-based Riot Kitchen who planned to distribute free food to protesters were arrested by law enforcement officials who emerged from unmarked cars, the Seattle Times reported.

Footage recorded by a bystander and widely shared on social media was featured in the Washington Post. The video shows law enforcement officers jump out of black SUVs and smash the window of a minivan before handcuffing both of the vehicle’s occupants:

“Our mission is to feed people for free—protesters and everyone in need,” Scheurle told the Times. “We were from out of town—but that’s not illegal.”

On Thursday afternoon, Scheurle said four of members of the volunteer crew had been released and four remained in jail.

On Twitter, Riot Kitchen shared video of the incident and said, “We are currently trying to find our friends who were just there to feed people.”

According to a statement made by the Kenosha Police Department, city police officers—assisted by U.S. Marshals—acting on information from a citizen tip about “suspicious vehicles with out of state plates,” located a black school bus, bread truck, and tan minivan, and “took up surveillance.”

Police say they stopped the minivan after it tried to drive away. According to the police, the vehicles also contained helmets, gas masks, protective vests, illegal fireworks, and suspected controlled substances.

Scheurle told the Times that “any cans filled with fuel would have been for legitimate uses, such as generators used in serving meals.”

Some observers found the arrests even more troubling compared to the treatment by local police towards Kyle Rittenhouse, the 17-year-old accused of murdering two protesters in Kenosha Tuesday after traveling from nearby Illinois with an AR-15 rifle.

A minor in possession of a weapon is, however, a crime. He then murdered people. https://t.co/RzNMQXfaYA

Riot Kitchen was en route to Friday’s march in Washington, D.C., where they planned to provide free food. When they learned, during the course of their cross-country trip, about the police shooting of Jacob Blake, they rerouted to Kenosha.

The nonprofit group is currently in the midst of a GoFundMe fundraiser.