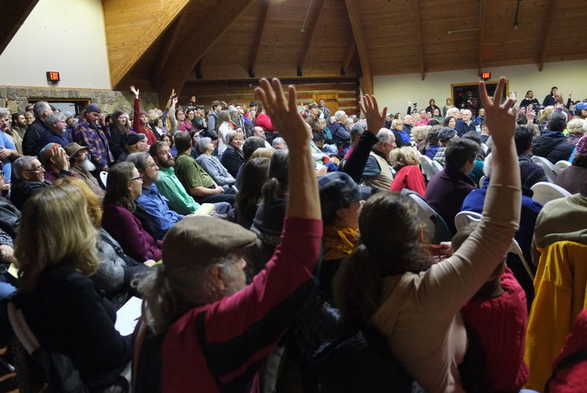 Photo: Residents of the Clear Creek area raise their hands Tuesday night to indicated they were approached by an energy company seeking to lease their mineral rights.

The walls of the Acton Folk Center were lined with people without room to sit Tuesday night during the first Frack Free Foothills community forum.

The group was formed after energy companies began approaching landowners of the Red Lick and Clear Creek areas seeking to lease mineral rights for hydraulic fracturing.

Those in attendance had many questions for speakers Bill Hughes of Wetzel County, W.Va., and Tom Fitzgerald of the Kentucky Resources Council.

Hughes, a documentarian of fracking, presented what he said are production stages that typically occur on fracking sites. These include large vehicles traveling on rural roads, water issues and air pollution, he said.

Fitzgerald, an environmental attorney, explained state regulation of oil and gas, the rights of landowners and ways to contact legislators to express opposition to fracking.

He also commented on a press release sent to news organizations Tuesday. The release states that state government has “very strong regulations to protect fresh water aquifers and the environment.” However, Fitzgerald said state laws are not as stringent as the release implies.

Lease-signers may be capable of retracting their signatures from leases if they were misinformed by companies that approached them, said Craig Williams of the Kentucky Environmental Foundation.

The Richmond Register will continue to follow the story, including more details of the meeting.