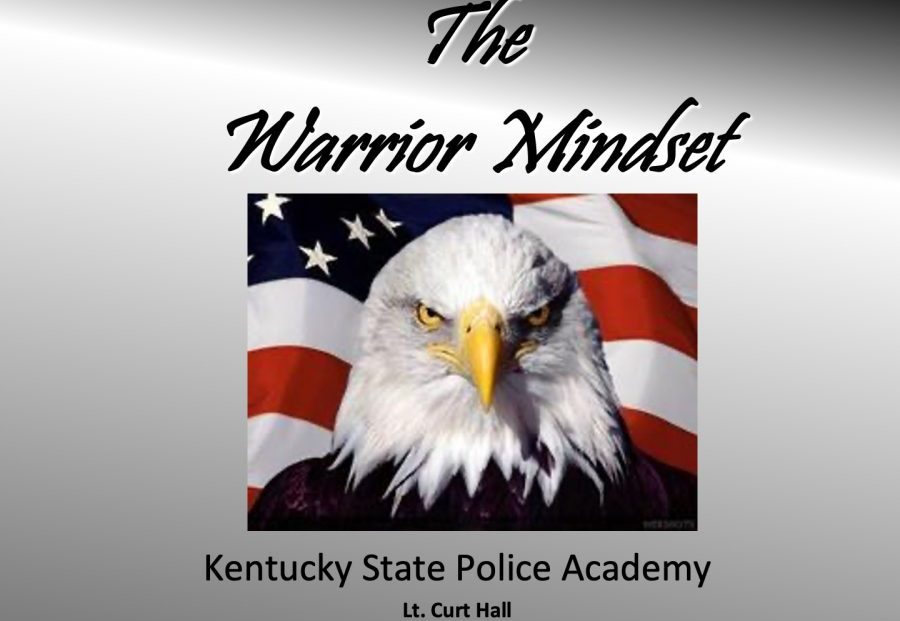 Above photo: Title slide in the slideshow.

UPDATE, 4:15 PM: Kentucky Governor Andy Beshear responded to this story with the following statement: “This is absolutely unacceptable. It is further unacceptable that I just learned about this through social media. We will collect all the facts and take immediate corrective action.”

UPDATE, 5:15 PM: Morgan Hall, the Communications Director for the Kentucky Justice and Public Safety Cabinet, sent RedEye this statement: “It is unacceptable that this material was ever included in the training of law enforcement. Our administration does not condone the use of this material. The material is not currently a part of any training materials and was removed in 2013.”

UPDATE, 8:30 PM: Rep. John Yarmuth, who represents Kentucky’s 3rd District in the US Congress, tweeted this in response to the story: “I am angry. As a Kentuckian, I am angry and embarrassed. And as a Jewish American, I am genuinely disturbed that there are people like this who not only walk among us, but who have been entrusted to keep us safe. There needs to be consequences.”

A training slideshow used by the Kentucky State Police (KSP) — the second largest police force in the state — urges cadets to be “ruthless killer[s]” and quotes Adolf Hitler advocating violence.

The slideshow was included in KSP documents obtained via an open records request by local attorney David Ward of Adams Landenwich Walton during the discovery phase of a lawsuit. Ward requested KSP materials used to train a detective who shot and killed a man in Harlan County, and Ward shared the presentation with Manual RedEye.

One slide, titled “Violence of Action,” in addition to imploring officers to be “ruthless killer[s],” instructs troopers to have “a mindset void of emotion” and to “meet violence with greater violence.”

A line from Adolf Hitler’s fascist and anti-Semitic manifesto, Mein Kampf, is featured in the slide: “the very first essential for success is a perpetually constant and regular employment of violence.”

The presentation also links to a Hitler page on Goodreads, a database of quotes and books.

Two other slides quoting Hitler bring his total to three, making him the most quoted person in the presentation.

In a statement emailed to RedEye reporters, KSP spokesperson Lieutenant Joshua Lawson wrote, “The quotes are used for their content and relevance to the topic addressed in the presentation. The presentation touches on several aspects of service, selflessness, and moral guidance. All of these topics go to the fundamentals of law enforcement such as treating everyone equally, service to the public, and being guided by the law.”

In a separate email, Lawson also stated that the presentation seems to be seven years old and appears to have been made by an instructor at the academy. It is not clear how long the presentation was used, or if it is still used. (Editor’s note: According to a statement received after publication from Morgan Hall, the Communications Director for the Kentucky Justice and Public Safety Cabinet, the presentation was not used after 2013.)

Although the presentation also features quotes from a variety of other sources including Sun Tzu and Albert Einstein, Dr. Jack Glaser —a professor at the University of California Berkeley who studies police practices — found the Hitler quotes inexcusable.

“Hitler is, justifiably, the archetype of a bad person with the worst, inhumane morals. It’s controversial enough to quote him when trying to illustrate a point about genocidal despots. Quoting him in the manner that these trainings do —prescriptively —is unfathomable,” Glaser wrote in an email to RedEye reporters.

The training materials are coming to light during a national discussion about systemic racism and the role of police in communities, a debate centered on Kentucky after Louisville Metro Police Department officers shot Breonna Taylor in March.

Since 2018, KSP troopers have committed at least 16 fatal shootings according to a Washington Post database of police shootings, the most of any police force in the state. Troopers were not wearing body cameras during any of the shootings.

During the same timeframe, the Louisville Metro Police Department, the largest police force in the state, killed 15 people, including Taylor.

Greg Belzley, a Louisville area criminal rights and police misconduct lawyer, said he was “shocked and dismayed” by the presentation.

“This basically says, when you come into work, you need to have the mindset of getting ready to go out there and kick some ass,” Belzley said.

Belzley described the presentation as “something out of Borat,” referencing the satirical anti-Semitic reporter portrayed by Sacha Baron Cohen.

Glaser worries that the presentation “is a recipe for excessive force.”

“The tenor and substance of this training is very much at odds with contemporary police efforts to improve community relations and minimize excessive use of force,” Glaser stated.

One slide titled “The Thin Gray Line” uses a quote from Robert E. Lee and two photos of seemingly all-white groups of KSP officers in their traditional gray uniforms.

“It’s concerning that the Thin Gray Line slide has a quote from Robert E. Lee, given that Lee was the Confederate commander and Confederate uniforms were famously gray,” Glaser said.

A closing slide of the Powerpoint simply states “Über Alles” in large text. The phrase, which was previously part of the German national anthem, translates to “above all” or “above everything else,” commonly used to signify national superiority. Modern Germans heavily associate the phrase with the Nazis.

Sadiqa N. Reynolds, President and CEO of the Louisville Urban League said the presentation was “unbelievable” and “disgusting.”

“The tone and tenor are overtly white, Christian, male, warlike and adversarial,” Reynolds said in a text message.

KSP did not respond to an open records request sent October 14 seeking additional records, which sought to find out how long the presentations were used in trainings and if any complaints had been lodged by cadets or other KSP personnel.

In a deposition on October 14, KSP Captain James Goble said that Lieutenant Curt Hall, whose name is on the slideshow, taught “warrior mentality” trainings at the KSP Academy.

Hall was the Assistant Commander at the KSP Academy from 2005 to 2015, and later became Commander of Internal Affairs at KSP before recently retiring. The internal affairs unit is typically tasked with investigating police misconduct.

The KSP presentation appears to draw heavily from nationally-known police trainer Dave Grossman, who delivers lectures to police forces nation-wide on his theory of “killology” teaching police officers to embrace “the responsibility to kill” and “making it possible for people to kill without conscious thought,” as he said during an interview with PBS’s Frontline.

“The focus on warriors and combat is deeply problematic. It is exceedingly rare that police officers have to fight for their lives,” Glaser wrote in his email. “Even if it is sometimes necessary to use serious physical force, starting with a warrior mindset is not necessary and can make violent conflict more likely.”

A 2019 Florida State University Study found that officers who had a “warrior mentality” were more supportive of excessive use of force than those who believed in a “guardian mentality.”

“The guardian mindset emphasizes communication over commands, cooperation over compliance, and legitimacy over authority. And in the use-of-force context, the Guardian emphasizes patience and restraint over control, stability over action” explained former police officer and current law professor Seth Stoughton in a 2015 Harvard Law Review article.

“The language used places officers in direct opposition to the communities they serve — dehumanizing civilians while propping up law enforcement,” Reynolds stated. “This training is emblematic of the root problems in policing and we should not be surprised with the resulting fruits.”

The reporters of this article are related to a partner at the firm Adam Landenwich Walton.